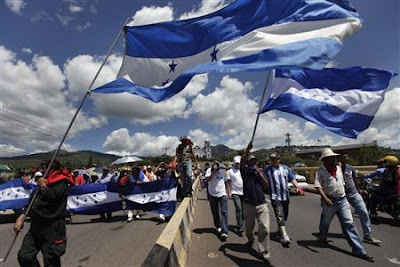 Supporters of Honduras’ ousted president Manuel Zelaya walk during a rally at Suyapa neighborhood in Tegucigalpa, September 9, 2009. Photo by Edgard Garrido / Reuters.
How do we respond?
Honduran resistance remains strong

If it succeeds, especially if it continues its use of nonviolent tactics, it will be a model for long awaited changes in the hemisphere. If the coup leaders succeed… military coups, governmental instability, poverty, and death could spread to other countries in the hemisphere.

I spent a week in Honduras with the Francisco Morazán Mission for Democracy, Active Nonviolence and Peace in Honduras, a project of the Centro Amigos por la Paz, in San José Costa Rica.

We visited with a large number of organizations and individuals who are active in the resistance to the government which ousted the elected president in a military coup — the first in forty years. This movement has staged street protests in Tegucigalpa and San Pedro Sula, Honduras’ largest cities, daily for almost seventy days (as of this writing).

Except for some rock throwing at demonstrations, and the painting of resistance slogans on walls (a mild form of property damage), the movement has been quite nonviolent. The response of the police and Army has been quite violent, however, with marchers being beaten, tear-gassed, shot with live ammunition, and detainees being tortured, raped, denied food and water, and beaten. Many people told us of receiving death threats by telephone and in person, and several said armed men were stationed outside their families’ homes.

Specific groups have different goals, but many believe, as one leader shared with us, “If we lose now, Honduras will not change for a hundred years.” Another said, “If the coup leaders succeed, my family and I, and all the thousands of protesters, will be forced to flee or will be dead within a year.”

We visited the U.S. Embassy, where we met with the head of the Political Section and the officer in charge of Human Rights. They assured us that the Embassy has a policy of no contact with the government in power, and that the U.S. military on the Palmerola Air Base were not communicating with or aiding the Honduran military. They reiterated their position that the U.S. will not recognize any winner in the Nov. 29th elections if the current government holds them as scheduled.

There was a rumor that ousted President Manuel Zelaya would return to the country on Sept 15th, Independence Day. On the 13th, exiled members of his cabinet were reported to have returned to the airport in Tegucigalpa with the aid of U.S. personnel. Even if the previous government is restored, however, the opposition wants elections postponed at least 6-8 months so that realistic campaigns can be waged. They also would like to see issues of constitutional change discussed, if not voted upon, in new elections.

There is much to discuss. Honduras is the third poorest nation in Latin America, and is ruled by the oligarchy that sponsored the military coup. Media has been strongly censored since the President was ousted, and the desperate struggle for a living wage, safe working conditions, health care, indigenous rights, women’s rights, basic education, and public services have rallied disparate groups into a strong coalition of resistance. They have mobilized big crowds of protestors, excited young people seeking a future, developed alternative media, and created ties of solidarity with groups all over the world.

Our delegation from Costa Rica received strong approval for the statement, “The main reason Costa Rica hasn’t had any coups for 50-plus years is that we abolished the Army.” The resistance movement is strategizing more than just the return of the legal government — it is moving toward what one leader told us is a life or death opportunity to bring Honduras into the 21st century.

If it succeeds, especially if it continues its use of nonviolent tactics, it will be a model for long awaited changes in the hemisphere. If the coup leaders succeed, many Latin Americans and analysts in the U.S. and Europe fear that military coups, governmental instability, poverty, and death could spread to other countries in the hemisphere.

I fear that it may not stop there, however. I believe that the U.S. has practiced the tactics of low-intensity warfare in Latin America for the last half century through the infamous School of the Americas’ training of military officers, economic tactics such as NAFTA, CAFTA, etc., and numerous acts of war, often against unarmed civilian populations. These tactics are now being felt in the U.S. itself under the Patriot Act and other so-called anti-terrorist measures. Support of the Honduran resistance is vital not only to Honduras’ future, but also to that of the U.S.

As a nonviolent activist for over 35 years, it’s exciting to me that the resistance movement has so far been nonviolent, if only by default. I believe that many members of the movement are nonviolent because they do not think they have nearly enough power and weapons to mount an armed opposition. But others, I believe, are truly interested in continuing nonviolent struggle, and learning more about it. They are inventing new tactics and reviving older ones. They are reaching out for solidarity and support from all over the world.

Friends Peace Teams has been invited to help by offering Alternatives to Violence Project (AVP) workshops in Honduras. I hope that we can rise to this challenge posed by the people of Honduras, calling upon the network of AVP facilitators in Latin America that we have helped to develop. Financial and moral support is critical to this effort.

A series of workshops leading to the development of trained Honduran facilitators would cost less than $10,000, and could be completed within two months. We have received invitations to do a workshop from one group in February, and other groups have expressed interest. With adequate funding from new sources, we could respond more quickly and with greater outreach.