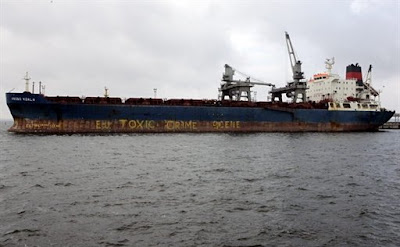 This story shows just how little some corporations care about the lives and health of innocent people, as long as they can make lots of money. Trafigura is an international commodities trading company , and they should be ashamed of the horror they unleashed on the people of Ivory Coast just so they could make a lot of money.

In 2006, they made a deal to buy some Mexican coker naptha (a very dirty form of gasoline) extremely cheap. The reason it was so cheap is because it could not be cleaned at the Mexican refinery, and to clean it properly and safely would be very expensive. But the company had no intention to spend the money to do the job properly.

Instead, once the coker naptha was loaded on their tanker, they poured tons of caustic soda and a catalyst into it — a process known as caustic washing. The process works and is cheap, but produces a very toxic waste by-product. It is so toxic that the process is banned nearly all over the world (including the United States).

They tried to off-load the toxic waste in Netherlands, but they were stopped. So they took the toxic waste to Ivory Coast. There they hired a local to dispose of it (who had no facilities to handle the waste), and it was dumped into places around the country. The toxic waste killed at least 16 people and caused a range of health problems for at least another 31,000.

What makes this story so bad is the fact that Trafigura employees (all the way up to the president of the company) knew what they were doing and how dangerous it was. This has been proven by company e-mails obtained by the BBC. The company officials simply didn’t care who they injured as long as they wound up making lots of money.

Don’t think Trafigura is alone in this kind of behavior. There are lots of large companies who would be willing to do things just as bad or worse, if they thought they could get away with it and make a ton of money. The bottom line is the only thing that matters.

And yet, we still let the corporate interests run this country. During the Bush administration, they even wrote their own laws (and I’m not at all sure Obama is doing much better). If we don’t change this, we’re setting ourselves up for a bad future.

This entry was posted in Rag Bloggers and tagged Africa, Corporate Abuse, Environment. Bookmark the permalink.