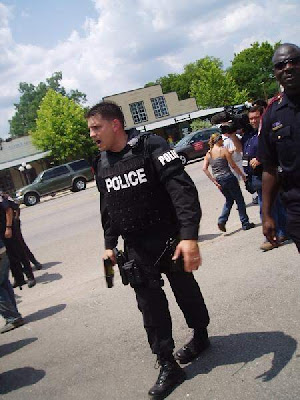 The Houston Police Department has found no wrongdoing in some 1,700 incidents in which its officers intentionally fired a Taser, despite investigating about 70 complaints — including one officer who shocked his own stepson and another who discharged his stun gun on a 59-year-old woman during a dispute over laundry.

Over the last four years, only five officers have been disciplined for misusing their Tasers, although not one of the five actually shocked a suspect, according to records obtained by the Houston Chronicle. Instead, HPD reprimanded officers for threatening people with their stun guns, repeatedly discharging them while off duty and brandishing the weapon in a dispute in an elementary school carpool line.

“If that is how they deal with family problems, how are they dealing with the public?” asked Shirley Baker, whose grandson was shocked by his officer stepfather.

Use of Tasers, sold as an alternative to the deadly force of firearms, has been controversial since HPD first purchased hundreds of them late in 2004. The weapon quickly triggered public criticism with findings that officers often used them on unarmed people who committed no crime and that the vast majority were black.

Houston Mayor Bill White in November 2006 called for an independent analysis, overseen by Controller Annise Parker’s office, which is expected to be made public Sept. 8. Parker has been publicly critical, saying last year that HPD’s system for tracking Taser use is insufficient and despite claims that each deployment is reviewed, it “can’t (be proven) with a paper trail.”

Police officials maintain the Taser is a useful tool that has reduced injuries to both officers and suspects. Each incident, they say, is closely scrutinized.

“To have (69) complaints and only a few sustained — that is reflective of successful use,” said Assistant Chief Brian Lumpkin, who oversees the HPD internal affairs division. “The numbers show that we have used Tasers responsibly.”

HPD officers deployed their Tasers 1,724 times between December 2004 and May 2008, triggering 69 internal affairs investigations. More than half began after citizens filed complaints. Five probes remain open, but investigators found no wrongdoing in 56 others.

Among the people who filed complaints were Thoang Do, 59, a woman shocked during an altercation at her laundromat.

Do and her husband, Van Chau, 72, crossed paths with officer Troy Triplett on April 19, 2007, after a customer, attempting to pick up clothes without a ticket, summoned police. An effort to sort out the confusion escalated into a struggle between Triplett and the 5-foot-4-inch Chau, according to witness statements obtained by the family’s attorney, Michael Nguyen.

The store’s glass door shattered. Chau lay on his stomach in jagged glass and blood. He would later require 28 stitches. Triplett, with a knee on Chau’s back, attempted to restrain him.

“His wife ran outside screaming ‘Nooo, Nooooo,’ seeing her husband bleeding and rolling in the glass as the officer continued to manhandle him,” a customer, Aaron Greenlee, said in a statement.

Triplett told Do to back away and, when she continued to reach out, he used his Taser.

Prosecutors charged Chau with felony assault of a public servant and Do with misdemeanor resisting arrest. A grand jury declined to indict Chau; Do’s case was dismissed.

The couple filed a formal complaint with HPD’s internal affairs division but no discipline has followed. Triplett directed questions to HPD’s media relations officials, who did not comment.

“It makes me wonder whether they really looked at what happened,” said the couple’s daughter Linh Chau, 29. “If they had, how could they do nothing?”

It is not uncommon for people shocked with Tasers to face no criminal charges.

A Houston Chronicle analysis of the first 900 incidents in which officers deployed their Tasers, published in January 2007, found that more than one-third of the people whom officers shocked faced no charges. In about 50 other cases, charges were filed but dropped by prosecutors or dismissed by judges and juries.

The Chronicle found that the majority of Taser incidents escalated from common police calls including traffic stops, nuisance calls and reports of suspicious people.

HPD officials have said they do not track those criminal cases and that their outcomes do not affect whether officers’ actions are ruled justified. None of the five Taser incidents in which Chief Harold Hurtt called for disciplinary action involve an officer shocking a suspect.

Hurtt suspended officer Douglas Randall Boyer for discharging five-second “spark tests” of his Taser 30 times while off-duty at home or while working an extra job. Internal affairs investigators found Boyer violated HPD protocols, which require officers to test their Tasers in front of a supervisor before each shift.

For that, Boyer received a one-day suspension. But, investigators found no problem with Boyer’s actions in a December 2005 domestic dispute in which Boyer shocked his stepson.

Boyer, who has a long disciplinary history including a 10-day suspension after a domestic violence incident with his then-wife, was at home and off-duty when he got into an argument with his 17-year-old stepson. Tensions escalated and the 27-year veteran officer turned to his Taser and shocked the teen.

Officers from the Harris County Sheriff’s Department and HPD came to his home, reported Boyer’s action to internal affairs and took the boy to his grandmother’s home, according to HPD documents.

“I can’t believe that this is how they want officers to use their Taser,” the grandmother, Shirley Baker said. “At home, on their kids?”

Hurtt also authorized discipline against officer Nichole P. Medrano, accused of threatening to use her Taser during a dispute in front of her children’s elementary school.

Medrano was off-duty but wearing her uniform Jan. 26, 2006, waiting in her children’s carpool line, when she confronted a woman who the officer said drove recklessly as she pulled up to the school.

According to police records, Medrano confronted the woman, who got angry.

“Officer Medrano took the woman’s keys and returned to her (Medrano’s) car,” said Lumpkin, the assistant chief over internal affairs.

Medrano used her cell phone to call for police and, while waiting, the officer threatened the woman with her Taser and her firearm, Lumpkin said.

Dispatch tapes captured Medrano warning the woman that “I will shoot your ass.”

The officer received a written reprimand.

“At the time of the incident, (the woman) was unarmed, and you used unsound judgment by threatening to use deadly force without sufficient cause to believe you were in danger of serious bodily injury or death,” reads the disciplinary letter.

Medrano did not respond to queries for a comment.

Three other officers have been suspended over Taser use.

“Short of deadly force, Tasers are the most scrutinized tool in the department,” he said.