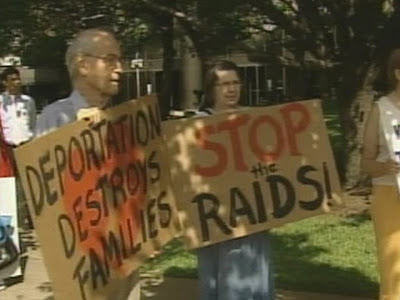 Immigration and Customs Enforcement officials said the raid at Action Rags USA Wednesday was a success. Some called the bust into question, claiming some of the workers panicked and were hurt.

Protesters outside Mickey Leland Federal Building in downtown Houston carried signs and chanted slogans. They said they were especially outraged because 60 to 70 percent of the people arrested were women.

As anxious relatives stood outside, van after van of mostly female undocumented workers were removed from a sweltering rag-sorting factory on Houston’s east side and whisked to an immigration processing facility.

The early morning raid Wednesday by Immigration and Customs Enforcement agents, while netting 166 undocumented workers, did not include arrests of company officials with Action Rags USA. But those charges may be on the way.

“The office of investigation is looking at allegations of the hiring of illegal aliens, which is a crime,” said Special Agent Bob Rutt, of the Houston ICE office. Arresting illegal immigrants was “a collateral part” of the investigation, he said. “Our focus, ICE’s overall focus, is targeting the employer.”

Rutt, however, referred inquiries about possible criminal charges in Wednesday’s raid case, as well as one at Shipley Do-Nuts in Houston, to federal prosecutors. There have been no arrests of Shipley managers or company officials.

“As it pertains to Shipley Do-Nuts, we cannot confirm or deny the existence of a criminal investigation,” said Angela Dodge, public affairs officer for the U.S. Attorney’s Office in Houston.

“Are we safer because they arrested immigrant women who are working?” asked Maria Jimenez, with the Center for Central American Resources in Houston. “I mean, 200 agents went to basically capture women who were contributing to the economy. What have we gained for society by removing mothers, wives and sisters from their family?”

“I think everybody recognizes that to get a handle on this, … you have to go after the employer,” said Steven Camarota, director of research with the Center for Immigration Studies, which advocates stricter immigration controls.

In fiscal 2007, ICE secured fines and forfeitures of more than $30 million in worksite enforcement cases, according to the agency’s annual report. ICE did not provide statistics on the number of employers criminally charged last year.

Employer prosecutions aren’t “the biggest bang for the buck, as far as the way ICE is thinking about it,” said Demetrios Papademetriou, president of the Migration Policy Institute, an immigration think tank based in Washington, D.C.

“It’s much easier and gets more headlines to arrest a lot of people,” Papademetriou said. “To make a case against an employer requires time and significant investments of investigative resources. Sometimes it takes half a year, or a year.”

ICE began investigating Action Rags USA a year ago after learning about hiring practices from a former employee.

The Wednesday raid, which involved 200 ICE agents, started shortly after work began at 7 a.m. at the sorting facility at 1225 Port Houston.

Late Wednesday, ICE officials said of the 166 workers they detained, 130 were females, including 10 who were pregnant. In all, 66 undocumented workers were released for humanitarian reasons, including pregnancy and child care issues, and were told to report to an immigration judge.

The workers who remain detained could be processed for removal from the U.S. The arrest tally included 135 from Mexico, 12 from Honduras, 10 from Guatemala, eight from El Salvador, and one whose nationality is unknown, ICE officials said.

The raid surprised many workers as they began a day of sorting bales of used clothing in the un-airconditioned facility. The clothing is shipped worldwide, according to a company Web site, or processed into rags for industry.

A woman who identified herself as a company supervisor said many of the workers initially didn’t believe a raid was under way, noting false reports of raids in the past year.

“But when I came out to look, the agents were at the doors, and they had surrounded the warehouse,” said Brenda, who gave only her first name. “They started yelling for us to sit down. They started searching us to see if we had knives or weapons.”

Brenda said workers who ran from federal agents or tried to hide were handcuffed “and treated like criminals.”

“When I left I was crying, because we all got along well,” she said. “We were like a family.”

ICE officials said four workers were taken to area hospitals due to anxiety attacks and heat-related illness; one woman fell 20 feet from a stack of pallets in which she was hiding.

Repeated attempts to contact company officials at the facility Wednesday were unsuccessful.

Action Rags lost its corporate status in July 2007 due to a tax forfeiture, according to Texas Secretary of State records. The records listed Mubarik Kahlon as the company’s registered agent and director.

Secretary of State spokesman Scott Haywood confirmed that Action Rags is no longer a registered LLC in Texas, but said he could not comment on any potential legal implications.

A woman who answered the door at Kahlon’s home in Humble said he was not there.

As ICE continues its investigation, pro-immigrant activists blasted the raid as a waste of taxpayer money which will have hurt Houston’s economy and workers’ families.

“Are we safer because they arrested immigrant women who are working?” asked Maria Jimenez, with the Center for Central American Resources in Houston. “I mean, 200 agents went to basically capture women who were contributing to the economy. What have we gained for society by removing mothers, wives and sisters from their family?”

Men were also detained, including the husband of Juana Ramirez, who acknowledged her spouse is not in the country legally.

“All he does is go to work, comes home and takes care of the kids when I go to work,” said an angry Ramirez, who works at a fast-food restaurant and is expecting the couple’s third child. “He doesn’t drink or do drugs. It’s not good at all.”

Papademetriou called raids like Wednesday’s the “low-hanging fruit” of operations.

“They don’t require an enormous amount of investment on the part of ICE. They make headlines. The numbers look substantial,” he said.

According to ICE statistics for the 2007 fiscal year, ICE made 863 criminal arrests and 4,077 administrative arrests as a result of worksite enforcement efforts nationally.

Camarota said even though the number of arrests is small in relation to the millions of illegal immigrants in the U.S., the raids have a significant impact.

“If you’re on a highway and thousands of people were speeding and one person gets pulled over, compliance with the law shoots up dramatically. Any law enforcement action has a much greater effect than just on the individuals who are subject to it,” he said.

“What they’re hoping to do is be able to use these stepped-up raids to force employers to reconsider their employment verification policies,” said Lashus, who is now a member of the Tindall & Foster immigration law firm in Austin. “They’re trying to scare the hell out of them — their intent is to force employers to police themselves.”

This entry was posted in RagBlog and tagged Houston, Immigration, Protest, Texas. Bookmark the permalink.