How Did Political Campaigns Get So Corrupted?

The Disease and Corruption of American Society Started After Kennedy’s Assassination
By Diane Stirling-Stevens / The Rag Blog / September 20, 2008

I have to wonder what kind of corruption and manipulation of local and state government goes on in Alaska. I also wonder about a federal judge who would dismiss all of this when in business and industry there are CLEAR guidelines as to what are grounds for termination from a job, and not ‘for whatever reasons’ a person wants to. Possibly it’s different in government, but that really disturbs me if that really is fact.

Today I read dumb-nuts McCain has suggested deregulating the health care industry; guess he wants to see the same collapse and bail-out as we’ve just gone through this past week.

It’s clear there is so much miscarriage of power in our federal and state government; lack of integrity and accomplishment in our senate and congress, it’s caused me to really lose my trust in this so-called Democracy.

Maybe we should remember that America was occupied by the native (Indian). That it was a bunch of upset English who didn’t want to pay taxes and were probably considered rebels (and might even be called ‘trailer trash’ today). Those that became ‘pilgrims’ to this ‘new world’, didn’t waste much time taking over the land; setting up this country as ‘their land’, and ultimately shoving the Indian to a reservation. They didn’t think twice about negotiating with the African slave owner who was willing to sell HIS OWN KIND, into slavery and ship them to this ‘new world known as America.

Clearly the likes of Sarah Palin; John McCain – GWB and the myriad of rich aristocrats who have brought this ‘ruin and depression’ to our country, think the common folk are dispensable and unworthy. They’ve dumbed down our youth; thrown distractions such as movies, television, and video games at them to make sure they have ‘no clue’ as to what’s going on in this nation.

Just as we often toss a few toys to our dog or cat to keep them occupied because we’re too busy to spend time with them (and we don’t want them chewing up our sofa and shoes), it’s been the same type of strategy the ‘rich and powerful’ have used to insure we have worker-bees standing in the wings when they need another bean counter or Gardner.

As a mother and grand-parent who has worked very hard to keep educating my family when the school system and teachers dropped the ball years ago, I’m thankful I could keep the memory of what decency and democracy was supposed to stand for. I think those who are e-mailing and blogging with urgency, are feeling the same way I am – we’re trying to keep freedom alive, and are truly concerned it is slipping fast away from us.

When I saw our president assassinated in 1963, I felt something change. In those next 5 years with the violence directed toward those who were trying to insure the future freedoms for our children, it seems to me that is when the disease and corruption started to move aggressively. 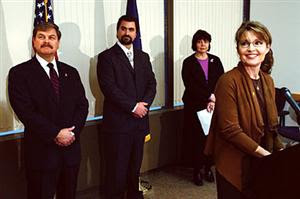 Eleven years before the current investigation into her dismissal of Alaska’s top cop, Sarah Palin was embroiled in a similar dispute over another personnel issue: her firing of the police chief in her hometown of Wasilla. Palin’s decision to terminate Irl Stambaugh, months after she was elected mayor in 1996, created a ruckus. It also led to a bitter and protracted lawsuit charging that she fired Stambaugh out of pique—in part because he’d crossed the interests of influential backers, including bar owners and gun enthusiasts who’d contributed significantly to Palin’s campaign, according to court and state records reviewed by NEWSWEEK. Palin denied these allegations under oath, and ultimately prevailed, after a federal judge concluded that the mayor had the right to fire any department head she wanted. Palin “made the decision … because the people of Wasilla had elected her to reform Wasilla’s government and he actively worked to frustrate those efforts,” says Taylor Griffin, a spokesman for the McCain-Palin campaign.

But the dispute is now getting renewed scrutiny in light of a number of other controversial personnel moves by the GOP veep nominee, including her firing of the Wasilla librarian (she was later reinstated) and Alaska Public Safety Commissioner Walt Monegan, whose dismissal last summer prompted the investigation, dubbed “Troopergate,” by Alaska’s legislature. (Monegan alleged he was fired because he resisted pressure from Palin and aides to can a state trooper involved in a messy custody battle with Palin’s sister. A state panel last week voted to subpoena 13 members of Palin’s administration in the probe, as well as her husband.)

Stambaugh, a former Anchorage police captain who once supervised Monegan, was hired as Wasilla’s first police chief in 1993 and created the town’s small police force, says former Wasilla mayor John Stein. But weeks after Palin beat Stein in 1996, she expressed displeasure with the chief. One big issue, Stambaugh said, was that he and other police chiefs had opposed a state-legislature bill to permit concealed weapons in schools and bars, which Stambaugh called “craziness.” But Palin, elected with backing from the National Rifle Association, which lobbied for the bill, told him she was “not happy” with his position, and that the NRA wanted him fired, says Stambaugh. Palin told him he “shouldn’t have done that,” Stambaugh told NEWSWEEK. (Palin denied in a deposition that the NRA contacted her about the weapons bill.)

An even bigger clash involved a proposed city ordinance backed by Stambaugh to close the town bars at 2 a.m. instead of 5. Stambaugh says he believed this would help curb late-night drunken driving at a time when, according to Stein, the former mayor, “people were driving out from Anchorage to the valley for more alcohol and crashing.” But Palin, as a council member, had voted against the measure—making her the favored candidate among bar owners, one of whom held a fund-raiser for her. Records obtained by NEWSWEEK show that Wasilla bar owners contributed $1,250 to her mayoral campaign—more than 10 percent of all the money she raised in 1996. Griffin did not respond to requests for comment on those contributions.

Stambaugh says it was only after clashing with Palin on these and another issue, involving efforts to restrain a “poker run” game enjoyed by snowmobile drivers where they play a hand at each bar, that he was fired. John Cramer, the city administrator hired by Palin, acknowledges that personal and political antagonisms may have played a role. Stambaugh, who backed Stein openly in the 1996 race, showed the new mayor little deference. At one meeting of town officials, Cramer says he heard him tell Palin: “Little lady, if you think you have our respect, you don’t. You have to earn it.” (Stambaugh denies making the comment.) Stambaugh filed suit, alleging breach of contract and civil-rights violations. In the course of the lawsuit, Palin filed an affidavit complaining that Wasilla cops had done an unauthorized state police check on her and her husband—which appears to have foreshadowed her later uneasy relationship with law enforcement. (Earlier this year, Palin told aides she no longer wanted the standard detail of six troopers assigned to protect Alaskan governors.) A federal judge ultimately tossed the case, on legal grounds, and ordered Stambaugh to pay $22,000 of Palin’s legal fees—proof, according to Griffin, that the case was “frivolous.” Stambaugh says his dispute should be looked at in the context of others involving Palin. “It’s not just me,” he says. “It’s Monegan, it’s the librarian. The list goes on and on. She believes she can fire people for whatever reasons she wants.” In Stambaugh’s case, a judge ruled she could do just that.

1 Response to How Did Political Campaigns Get So Corrupted?