This actually comes as quite a surprise, since we’re dealing with the Bush administration and the myriad declarations of immunity that Jerry Bremer left behind in Baghdad. I won’t be holding my breath expecting these men to serve any prison time, that’s for sure. 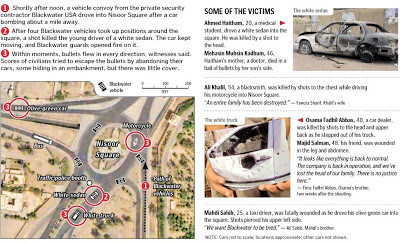 WASHINGTON — Five Blackwater Worldwide security guards have been indicted and a sixth was negotiating a plea with prosecutors for a 2007 shooting that left 17 Iraqis dead and became an anti-American rallying cry for insurgents, people close to the case said Friday.

Prosecutors obtained the indictment late Thursday and had it put under seal until it is made public, perhaps as early as Monday. All who discussed the case did so on condition of anonymity because the matters remain sealed.

Six guards have been under investigation since a convoy of heavily armed Blackwater contractors opened fire in a crowded Baghdad intersection on Sept. 16, 2007. Witnesses say the shooting was unprovoked but Blackwater, hired by the State Department to guard U.S. diplomats, says its guards were ambushed by insurgents while responding to a car bombing.

Young children were among the victims and the shooting strained relations between the U.S. and Iraq. Following the shooting, Blackwater became the subject of congressional hearings in Washington and insurgent propaganda videos in Iraq.

The exact charges in the indictment were unclear, but the Justice Department has been considering manslaughter and assault charges against the guards for weeks. Prosecutors have also been considering bringing charges under a law, passed as part of a 1988 drug bill, that carries a mandatory 30-year prison sentence for using a machine gun in a crime of violence.

The Justice Department has ordered five of the six guards to surrender Monday to the FBI, but details of where and precisely what time were still being worked out Friday, according to those people close to the case.

The remaining guard has been negotiating to reduce the charges against him in return for cooperation. If completed, such a deal could provide prosecutors with a key witness against the other five. Others in the convoy have already testified before a federal grand jury about the shooting.

Blackwater spokeswoman Anne Tyrrell said, “We’ve consistently said that we do not believe the guards acted unlawfully. If it is determined they did, we would support holding them accountable.”

Regardless of the charges they bring, prosecutors will have a tough fight. The law is unclear on whether contractors can be charged in the U.S., or anywhere, for crimes committed overseas. The indictment sends the message that the Justice Department believes contractors do not operate with legal impunity in war zones.

Based at a sprawling compound in Moyock, N.C., Blackwater itself is not a target of the FBI investigation. Company officials have cooperated with the investigation.

To prosecute, authorities must argue that the guards can be charged under a law meant to cover soldiers and military contractors. Since Blackwater works for the State Department, not the military, it’s unclear whether that law applies to its guards.

Further complicating the case, the State Department granted all the Blackwater guards limited immunity in exchange for their sworn statements shortly after the shooting. Prosecutors will need to show that they did not rely on those statements in building their case.

The State Department declined to comment and referred questions to the Justice Department.