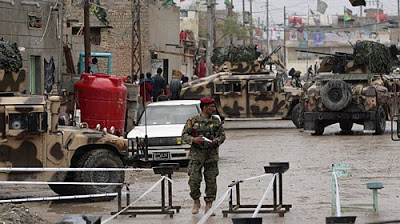 There is a curfew on cars in cities, and Baghdad’s airport is shut as officials prepare for Saturday’s vote, which many hope will redress sectarian grievances by giving Sunni Arabs seats on councils.

Late Friday, vehicular curfews took effect in cities, Baghdad’s airport was closed and borders were sealed, signs of security concerns that remain high despite a major drop in violence in recent months. Polling stations were ringed with razor wire and under 24-hour police guard. At one site, police Lt. Dhia Khadim bragged that voters had to undergo six searches before casting their ballots.

“It’s essential,” Khadim said as a rooster crowed nearby and wind sent dust swirling about the courtyard of the school serving as polling place.

Saad Hassan was the first in line to vote at a polling station in east Baghdad’s Sadr City, the Shiite stronghold of anti-U.S. cleric Muqtada Sadr. He woke up at 6 a.m., prayed, and brought his family with him, walking in the dim and dusty light of the early morning through an area that less than a year ago was engulfed in fighting between Shiite militiamen and U.S. and Iraqi security forces.

“We are sick of the religious figures, which brought only chaos to our country,” Hassan said after voting for a secular party.

Koudir Oudah Kahdum voted at the same station, but for the Islamic Dawa Party of Prime Minister Nouri Maliki. As with many Iraqis, memories of Saddam Hussein’s dictatorship swayed his decision. “It was Maliki who implemented his execution,” Kahdum said, referring to Hussein’s hanging in 2006. Maliki “is a brave man and our hero,” he said. “He deserves that we vote for him again and again.”

At stake are 440 seats on 14 provincial councils, the equivalent of U.S. state legislatures.

The current councils are dominated by Shiites and ethnic Kurds, even in areas where Sunni Arabs dominate, a result of a boycott of the 2005 elections by Sunni Arab parties. The lopsided councils and Sunnis’ lack of power served to exacerbate sectarian and ethnic tensions that had boiled over into violence and have continued to hinder political progress.

The elections are seen as a barometer of Iraq’s ability to remain relatively calm as U.S. military forces scale back their presence. A smooth process could also boost President Obama’s desire to accelerate the U.S. troop withdrawal, something he has said he wants to achieve within 16 months. That places U.S. military commanders in Iraq in a delicate situation. They are eager to highlight Iraq’s improved security and point to the elections as a milestone, but they also warn against a hasty withdrawal of the 140,000 American troops here.

“I think over-focus on a single event is always dangerous, be it positive or negative,” said Army Brig. Gen. Daniel B. Allyn, one of the top U.S. commanders in Iraq, speaking of the elections as a measure of Iraq’s future stability.

“Iraq is on a journey. It’s on a journey toward sovereign nationhood,” he said, noting that with nearly 14,500 candidates vying for council seats, most would lose. “That’s a lot of disappointed people, like about 14,000 of them.”

U.N. Special Envoy Staffan De Mistura said he was confident that there would not be a return to violence as occurred after the 2005 elections, because this time Sunni Arab parties are taking part. In addition, he said, Iraq has overcome what he called the Samarra syndrome — the eruption of sectarian violence after a major attack, such as the 2006 bombing of a Shiite shrine in Samarra. The attack led to a steep rise in Shiite-Sunni violence that displaced hundreds of thousands of people and left the capital carved into sectarian-based neighborhoods.

For that reason, Abu Walid Jabouri said Friday, he did not trust any of the more than 300 parties in the fray to overcome the perils of sectarianism.

“I will go to the poll, but I will not write anything. I will just draw a line across the ballot,” said Jabouri, out for an afternoon stroll with his wife and young daughter.

In 2005, Mohammed Hussein supported the Iraqi National Accord, a secular party headed by former Prime Minister Iyad Allawi. With security his main concern now, Hussein wasn’t sure which way to vote. He planned to decide at the last minute, at the booth.

“We want whoever rules us to be secular, but we also want security,” he said, acknowledging that Maliki had impressed him with his crackdown on Shiite militias.

Maliki is hoping the crackdown will help seal a Dawa victory in Baghdad and the southern provinces, where the rival Supreme Islamic Iraqi Council holds sway. Strong showings would help Maliki consolidate power across the country before national elections this year that will determine whether he remains prime minister.

[Times staff writers Ned Parker in Najaf and Monte Morin in Baghdad and a special correspondent in Baghdad contributed to this report.]

This entry was posted in RagBlog and tagged Free Elections, Iraq, Iraq Occupation. Bookmark the permalink.