Iraq Sucked. Now Get On With It. 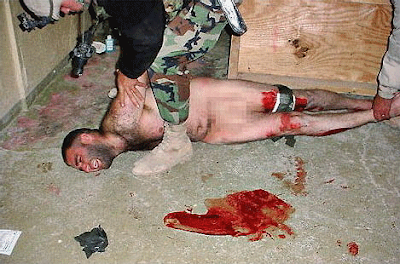 The prisons in Iraq stink. Ask any guard or interrogator and they’ll tell you it’s a smell they’ll never forget: sweat, fear and rot. On the base where Ben Allbright served from May to September 2003, a small outfit named Tiger in western Iraq, water was especially scarce; Ben would rig a hose to a water bottle in a feeble attempt to shower. He and the other Army reservists tried mopping the floors, but the cheap solvents only added a chemical note to the stench. During the day, when the temperature was in the triple digits, the smell fermented.

It got even hotter in the Conex container, the kind you see on top of 18-wheelers, where Ben kept his prisoners. Not uncommonly the thermometer inside read 135, even 145 degrees. The Conex box was the first stop for all prisoners brought to the base, most of them Iraqis swept up during mass raids. Ben kept them blindfolded, their hands bound behind their backs with plastic zip ties, without food or sleep, for up to 48 hours at a time. He made them stand in awkward positions, so that they could not rest their heads against the wall. Sometimes he blared loud music, such as Ozzy or AC/DC, blew air horns, banged on the container, or shouted. “Whatever it took to make sure they’d stay awake,” he explains.

Ben was not a “bad apple,” and he didn’t make up these treatments. He was following standard operating procedure as ordered by military intelligence officers. The MI guys didn’t make up the techniques either; they have a long international history as effective torture methods. Though generally referred to by circumlocutions such as “harsh techniques,” “softening up,” and “enhanced interrogation,” they have been medically shown to have the same effects as other forms of torture. Forced standing, for example, causes ankles to swell to twice their size within 24 hours, making walking excruciating and potentially causing kidney failure.

Ben says he never saw anything like that. The detainees didn’t faint or go insane, as people have been known to do under similar conditions, but they also “weren’t exactly lucid.” And, he notes, “I was hardly getting any sleep myself.”

When I first set off to interview the rank-and-file guards and interrogators tasked with implementing the administration’s torture guidelines, I thought they’d never talk openly. They would be embarrassed, wracked by guilt, living in silent shame in communities that would ostracize them if they knew of their histories. What I found instead were young men hiding their regrets from neighbors who wanted to celebrate them as war heroes. They seemed relieved to talk with me about things no one else wanted to hear — not just about the acts themselves, but also about the guilt, pain and anger they felt along with pride and righteousness about their service. They struggled with these things, wanted to make sense of them — even as the nation seemed determined to dismiss the whole matter and move on.

This, perhaps, is the real scandal of Abu Ghraib: In survey after survey, as many as two-thirds of Americans say torture is justified when it’s used to get information from terrorists. In an ABC/Washington Post poll in the wake of the 2004 scandal, 60 percent of respondents classified what happened at Abu Ghraib as mere abuse, not torture. And as recently as last year, 68 percent of Americans told Pew Research pollsters that they consider torture an acceptable option when dealing with terrorists.

Critics of the administration’s interrogation policies warn that the ramifications will be felt across the globe, including by Americans unlucky enough to be imprisoned abroad. Foreign policy scholars fear the fallout from Abu Ghraib has already weakened the U.S. military’s anti-terrorism capabilities. Lawyers warn about war crime tribunals. But hardly anyone is discussing the repercussions already being felt here at home. It’s the soldiers tying the sandbags around Iraqis’ necks and blaring the foghorns through the night who are experiencing the effects most acutely. And the communities they’re returning to are reeling as a result.

When I went to visit Ben in Little Rock, Ark., I wanted to know why this charming, intelligent, and overly polite 27-year-old had done what he’d done. For 10 days we rode around in his beat-up maroon 1970s Mercedes — running errands, picking up job applications, meeting his girlfriend for lunch. Ben wore pink shirts, hipster blazers and color-coordinated Campers; he used hair products, which to his friends meant being a metrosexual; he listened to indie rock, watched “The Daily Show” and wrote attitude-filled blogs on veterans’ rights, which meant being a liberal. He refereed football games, worshipped novelist Dave Eggers and placed special orders at McDonald’s so his meals would be fresh.

He was unemployed, fired from his latest job as a bank teller the day before I arrived. Ben had worked there for four months — the longest he’d held down a full-time job since coming home from Iraq. He’d tried tutoring high schoolers, bagging groceries and doing IT support for Best Buy. Part of the problem, he said, was the lack of good jobs in the area, part of it his own “flailing and procrastinating.” He had toyed with the idea of law school and scored a near-perfect 178 on the LSAT entrance test, but then turned down offers from schools such as NYU. While I was in town he picked up an application for a job at his corner liquor store. In high school he was one of two students voted most likely to become famous. “The other kid became a doctor,” Ben confessed, “and I, well, yeah …”

After Ben came home in March 2004, he was treated warmly. “I was at Applebee’s one night and a guy overheard that I had just come back from Iraq,” he recalls, “so he bought me a Jack and Coke.” He was offered discounts on cell phones and cars. “I finally felt appreciated after feeling used for so long.”

But the welcomes couldn’t silence the questions that kept him up at night. Ben loves to debate, perhaps because he usually wins, but now he was endlessly, fruitlessly arguing with himself. “Every human being instinctively knows right from wrong. There is never a justification for torture.” But then again, “Is softening people up wrong on some levels? I don’t know. It wasn’t beneficial to them, but it was presented as necessary.” He had seen a side of himself he didn’t know existed, and now he had to live with that. “In combat you question your mortality,” he told me. “In these prisons you question your morality.”

I asked Ben point-blank if he considered himself a torturer. It was a hard question to ask, a harder one to answer. He said he didn’t know. He asked me how other soldiers in his situation had responded. Most, I told him, didn’t even brook use of the word “torture” instead of “harsh interrogation.” He finally said he guessed he didn’t want to have to think of himself that way, and that it was time to go meet his girlfriend.

When he first got back from Iraq, Ben had nightmares and couldn’t remember things; this was infuriating, since he’d always prided himself on his perfect memory. A psychiatrist diagnosed him with PTSD, but he refused medication. Instead he blew $14,000 on bar tabs his first four months home. “I drank every night. I’d wake up next to a stranger at around 4 p.m. and head off to the strip club again.” He traveled some, because “you can reinvent yourself when you’re out of town.” He also re-enlisted; he’ll be on active duty until 2013, which means that once a month he has to cut his perfectly messy hair and show up at the local base. He thinks the military needs people like him, “people who can see both sides of things.”

Read all of this sad story here.

This entry was posted in RagBlog and tagged Iraq, Torture. Bookmark the permalink.