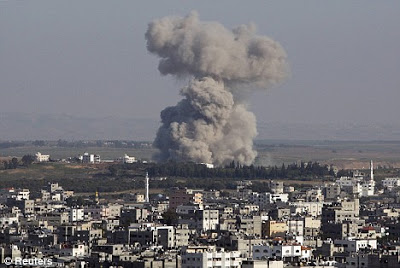 See the latest news, Below:

Israeli forces have dropped dozens of leaflets over the Gaza Strip warning civilians it is set to ‘escalate’ its military offensive. . .

The Israeli threat to launch a ‘new phase’ in its two-week-old offensive that has already killed more than 800 Palestinians came in defiance of international calls for a cease-fire. . .

JERUSALEM — A United Nations report released Friday said that earlier this week Israeli forces repeatedly shelled a home to which the UN had evacuated about 110 Palestinians in the Zeitoun area of Gaza City, killing around 30 people.

The Israeli military said it had no immediate comment.

‘We received eyewitness accounts from several survivors,’ said Allegrea Pacheco, the deputy head of the UN Office for the Coordination of Humanitarian Affairs (OCHA).

The UN report, based on the testimonies, said that Israeli ground troops evacuated the Palestinians into a single-residence home on Sunday and warned them ‘to stay indoors.’

About half of the Palestinians were children.

Israeli forces then ‘shelled the home repeatedly’ the next morning, the UN official said.

‘It took several days until ambulances could reach the area,’ said Pacheco, explaining that the wounded and dead were stuck together in the same cramped rubble the entire time.

The International Red Cross had said that it was unable until Wednesday to access the area, where it found severely weakened people, including children, and corpses. It condemned Israel for violating international law by denying medical teams access to the area.

The UN said at least 257 of the over 781 Palestinians killed in Operation Cast Lead, were children. Since Israel began its ground operation on January 3 ‘the number of children fatalities has increased by 250 percent.’

‘There is no safe place in Gaza,’ said Pacheco, adding that civilians needed to be protected in times of war.

OCHA said the ongoing Israeli offensive in Gaza, now in its 14th day, has ‘resulted in the largest number of forcibly displaced Palestinians since 1967.’ 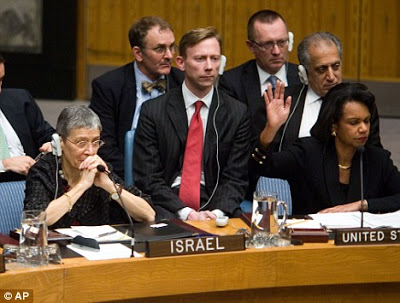 ‘The IDF (Israeli Defense Forces) will escalate the operation in the Gaza Strip,’ the leaflets said in Arabic.

‘The IDF is not working against the people of Gaza but against Hamas and the terrorists only. Stay safe by following our orders.’

Meanwhile flames and smoke rose over Gaza City today amid more heavy fighting, with Israeli tanks advancing and Hamas militants firing rockets at Israel, despite international efforts to put a stop to the conflict.

The Israeli military said more than 15 militants were killed in overnight fighting.

In the day’s bloodiest incident, an Israeli tank shell killed nine people in a garden outside a home in the northern Gaza town of Jebaliya.

Separately, a woman was killed by tank fire in the nearby town of Beit Lahiya.

The Israeli army denied carrying out any attacks in the area.

The deaths, including those of several Palestinian gunmen, raised the Palestinian toll to at least 821, according to the Hamas-run Health Ministry in Gaza.

Thirteen Israelis have been killed: 10 soldiers and three civilians hit in rocket fire.

The fighting continued even during a three-hour ceasefire window Israel has established in recent days to allow aid into Gaza to sustain the 1.5 million people living there.

Palestinian Authority president Mahmoud Abbas said all parties would be responsible for continued violence, if they did not accept an Egypt-brokered truce.

Mr Abbas, who was in Cairo for talks on how to halt the conflict, which is in its 15th day, called for an international force in Gaza.

Israel has come under international criticism for the rising number of civilian casualties.

Israeli troops were accused yesterday of evacuating Palestinian civilians to a house in Gaza and then shelling it 24 hours later.

At least 30 died and dozens were injured in the incident which could prompt a war crimes investigation.

The United Nations said about half the dead were children. Witnesses told staff that 110 civilians had taken shelter in the building when it was hit last Sunday.

Hopes of a truce were dashed with Israel rejecting a UN Security Council resolution calling for an ‘immediate and fully respected ceasefire’.

Hamas gave its answer by continuing to fire rockets into Israeli towns – about a dozen rockets were fired today.

The U.N. said it was hoping to resume full aid distribution today after receiving Israeli assurances that its staff would not be harmed.

The allegations surrounding the death of the 30 civilians are the most serious so far in Israel’s assault on Gaza.

The Red Cross vented its fury at Israel after the strike, saying it had found four starving children at the house clinging to the corpses of their dead mothers.

‘This is a shocking incident,’ said Pierre Wettach, Red Cross regional head. ‘The Israeli military must have been aware of the situation but did not assist the wounded.’

The Israeli Defence Force today released a map showing the rocket range into Israel from Gaza. The IDF claims one million people in Israel are within striking range of Gaza rockets

One survivor, Ahmed Ibrahim Samouni, 13, said from hospital: ‘We were asleep when the tanks and the planes struck, we all slept in one room. One shell hit our house.

‘We ran out and saw 15 men, they landed from helicopters on rooftops of buildings.’

Another report yesterday claimed U.S. President-elect Barack Obama was set to open up low-level talks with Hamas when he takes over the presidency.

With agreement growing in Washington that the Bush policy of excluding Hamas is counter-productive, the Guardian cited transition sources who claimed the President-elect is being advised to open clandestine talks with the Islamist organisation – possibly through European channels.

Palestinian children who fled from their homes following an Israeli air strike sit at a United Nations aid centre based in a local school. The UN has accused Israel of killing 30 more civilians in shelling in Gaza.
.
Meanwhile the Bush administration, which abstained in the U.N. vote calling for an end to fighting, has offered further support for Israel’s military goals.

Israel’s Prime Minister Ehud Olmert said the UN resolution calling for a ceasefire ‘cannot work’ and declared: ‘The firing of rockets this morning only goes to show that the UN decision is unworkable and will not be adhered to by the murderous Palestinian organisations.’