Israel’s Olmert Is Finished and Tarnished

We just posted about this. It seems to have finally yielded a result. It would be outstanding to see this change yield a meaningful dialogue for peace with Palestine. And even more outstanding if BushCo could keep its nose out of the discussion. 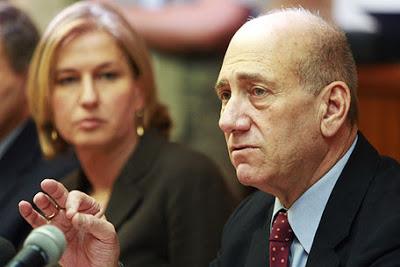 Livni, who has gained respect for favoring peace deals with the Palestinians and Syria while distancing herself from the unpopular Olmert, would become Israel’s second female prime minister after Golda Meir, who served from 1969-1974.

A former lawyer and one-time agent in the Mossad spy agency, Livni has 42 days to form a government.

Olmert remains in office until a new government is approved by the parliament, and he has pledged to press ahead with peace efforts as long as he is premier. That in itself might push reluctant Israeli politicians to deal quickly with Livni.

Olmert’s dismal approval ratings approach single figures, and both those who favor an accord with the Palestinians and those who oppose it don’t want him to be the one who presents an agreement to the people.

She met leaders from the pivotal Shas Party Thursday, hours after she won a primary election to succeed Olmert as head of their Kadima Party. Over the weekend, she sat with leaders of several other factions, and later Sunday, she scheduled a meeting with Defense Minister Ehud Barak, head of the Labor Party, Olmert’s main partner.
Formal steps were overtaken by events, and the two unfolded in parallel universes.

Olmert told his Cabinet on Sunday morning that he would resign and followed that with a visit to the official Jerusalem residence of President Shimon Peres — both formalities in a process that began in late July, when Olmert caved under the pressure of multiple corruption probes and announced he would step down after the Kadima primary election.

“This decision was not easy, it was not simple, and it was not taken in an offhanded way,” Olmert said before the start of the Sunday Cabinet meeting. He pledged to help Livni, a longtime rival, form a new government.

“Prime Minister Ehud Olmert presented to me this evening his resignation as head of the government,” Peres said after the two met. Peres thanked him for his service. Olmert did not talk to reporters.

At stake is political stability in Israel as the clock winds down on a January target date for a peace accord with the Palestinians, set by Olmert and Palestinian President Mahmoud Abbas at a U.S.-sponsored peace conference last November.

Livni favors negotiations and making concessions to forge a peace agreement, but if she fails to form a coalition, elections would be called, and Israel might not have a new government until next spring. That could freeze peace efforts for months.

Olmert succeeded the popular and respected Ariel Sharon, who was felled by a stroke, and weeks later Olmert led Israel into a war with Hezbollah guerrillas in Lebanon. The decision to go to war and its inconclusive outcome, along with the damage wrought by almost 4,000 rockets fired at Israel by Hezbollah, decimated Olmert’s popular support.

Then old corruption allegations caught up with him. Police began pressing their investigations, and a key witness testified in a “trial” against Olmert though no charges had been filed. That led Olmert to step down, setting the search for a new leader in motion.

On Sunday, Peres consulted with the parties over who should join the new government. Peres faced a shorter deadline than the week allotted him by law — he was due to leave for the United Nations on Monday to address the General Assembly session the next day. Peres said he would announce his decision before leaving for New York.
It was a foregone conclusion that Livni would be his choice, so even before receiving the formal title of prime minister-designate, Livni was sounding out the parties about their demands for remaining on or joining her team.

Livni won the Kadima primary by a small margin over hawkish former Defense Minister Shaul Mofaz, who announced he would not serve in her government. With Kadima already holding only 29 seats in the 120-member parliament, a split in her party could doom her efforts to forge a majority coalition.

Barak’s Labor is in a difficult position. On the one hand, Labor does not want to continue in its subordinate position as a junior partner to Kadima. But polls show that if an election were held now, Labor would win only a dozen or so seats, a drastic comedown for the party that ruled Israel practically unchallenged for its first three decades.

Analysts believe that after an initial show of reluctance, Labor will join along with Shas and the Pensioners party, the other member of the outgoing government. Livni would like to add others to the team to increase its stability.

The main opposition leader, Benjamin Netanyahu of the hawkish Likud, is calling for new elections. Likud stalwarts are ridiculing Kadima, Livni and Olmert, saying they have failed the country and must all be replaced. Polls show Kadima and Likud virtually tied if an election were held now.

This entry was posted in RagBlog and tagged Israel, Political Corruption. Bookmark the permalink.