Jack A. Smith : The U.S. and Irreversible Climate Change 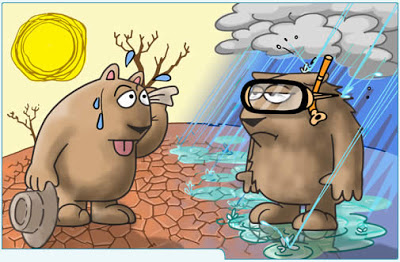 The Obama Administration has largely remained passive about the critical imperative to reduce greenhouse gases to limit catastrophic global warming.

Washington continues to insist upon exercising world leadership in all key global endeavors, including the environment, but has failed dramatically in terms of climate change.

In fact, the White House is greatly expanding U.S. access to fossil fuel energy sources even as scientific and environmental organizations are intensifying their warnings about the need to immediately reduce greenhouse gas carbon emissions that are warming the planet.

Although the U.S. recently has ranked second to China in fossil fuel burning, it is by far the greatest polluter of the atmosphere in the last century and a half. Given the differences in population, America still uses three times more per capita than China.

While increasing the development and use of global warming fuels, President Obama is advancing no significant program to replace high carbon emitting fossil fuels with renewable non-carbon solar and wind power.

The U.S. government is subsidizing some major “green” corporations, providing them with nearly no-risk guarantees for developing solar and wind, but this remains a relatively minor enterprise. Progress made so far is being stalled by the unexpected abundance (and thus cheaper price) of domestic natural gas secreted in shale, more secure oil reserves than anticipated, and the probability of reduced federal and state subsidies.

In a major statement from London November 9, the International Energy Agency (IEA) called for a “bold change of policy direction toward the use of low-carbon fuels within the next five years. If the major industrial states do not do so quickly, the world will lock itself into an insecure, inefficient and high-carbon energy system,” which is precisely what the Obama Administration is doing.

This recommendation seeks to prevent the rise in global temperatures in this century from exceeding 2 degrees Celsius, which is based upon keeping carbon emissions in the atmosphere below 450 parts per million (ppm). Anything above the target standards will cause irreparable damage to life on Earth.

According to many scientists and environmental groups these standards are inadequate, and that 350 ppm is the maximum amount that can be accommodated without causing a disaster. Atmospheric carbon, which occurs naturally, has reached dangerous levels due to industrialization. It has increased from 280 ppm at the beginning of the industrial era to approximately 392 ppm today, which is why it is said warming is well underway and its effects are being felt throughout the world.

The Environment News Service reports that the “agency’s warning comes at a critical time in international climate change negotiations, as governments prepare for the annual UN climate summit in Durban, South Africa, November 28-December 9. ‘If we do not have an international agreement whose effect is put in place by 2017, then the door will be closed forever,’ IEA chief economist Fatih Birol warned.'” (The main goal of the 17th climate summit is to agree on a resolution to replace the Kyoto Protocols, which will expire next year.)

The IEA describes itself as “an autonomous organization which works to ensure reliable, affordable and clean energy for its 28 member countries and beyond.” Its members represent the world’s leading capitalist countries. Greenpeace and some other environmental groups are critical of the group’s approval of tar sands oil, lower carbon fuels and nuclear energy. The BRICS countries (Brazil, Russia, India, China, and South Africa) are not IEA members.

Giving new life to fossil fuels is a devil’s bargain, probably making solutions to climate change, and the development of renewable energy, even more difficult. Not only are you extending the fossil fuels era, but you are moving into fossil fuels that are dirtier and release more carbon pollution in the process of extracting and using them.

The Obama Administration has been leaning toward approving a $7 billion investment in a pipeline to transport Canadian tar sands oil to Texas but encountered a fusillade of activist opposition from the environmental movement in recent months. Michael Brune, executive director of the Sierra Club, has declared that “Tar sands oil is the dirtiest oil on Earth.” Dr. James Hansen, NASA’s top climate scientist, says that fully developing the tar sands in Canada would mean “essentially game over” for the climate.

Environmental movement criticisms have been compounded by objections from residents of Nebraska with concerns that pipeline spills might pollute the irreplaceable Ogallala aquifer, which occupies 10,000 square miles north to south from South Dakota to Texas and is a major source of water for the High Plains.

In August and September, 1,200 anti-tar sands activists were arrested for offering civil disobedience in front of the White House. On November 6, 12,000 people surrounded the presidential mansion demanding an end to construction of the 1,700-mile Keystone XL pipeline from Canada to Texas.

Four days later, President Obama announced that his final decision would now be postponed until months after next year’s elections, implying that the pipeline route might have to circumnavigate the immense aquifer.

Some environmental groups have interpreted Obama’s delay as a victory, suggesting that the project is being abandoned, but this view is too optimistic. The White House seeks abundant and stable supplies of oil for the next several decades from sources other than (or in addition to) the volatile Middle East, and tar sands oil from nearby friendly Canada is a most attractive alternative. Canadian oil has been entering the U.S. for many years in existing pipelines, and this is continuing. In all probability, some version of Keystone will greatly increase the supply. 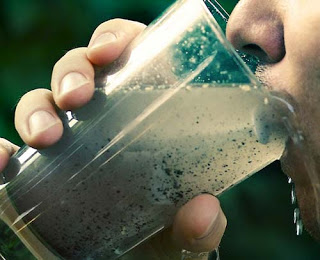 Does fracking affect the water supply? Graphic from Desmogblog.
Environmentally-concerned Americans have also launched campaigns against fracking, mainly because of the danger to water supplies inherent in an extraction method that requires the high pressure injection of deadly chemicals deep underground.

The Obama Administration is so intent upon vastly increasing natural gas production that it has been brushing objections aside, as have state governors — such as New York State’s Andrew Cuomo — who argue that what really matters are the additional jobs and tax revenue from massive fracking operations.

Advocates of natural gas argue that burning gas for electricity emits 30% less carbon dioxide than oil, and about 45% less than coal. But recent studies have shown that the process of fracking releases sufficient stores of methane into the atmosphere to compensate for any reduction in carbon from natural gas. Methane creates a greenhouse heat trap about 20 times greater than carbon dioxide. The gas industry maintains that the reduction in emissions from natural gas “outweighs” the detrimental effects of methane.

The New York Times article points out that

“Temporary or permanent fracking bans have been put in place in New York, New Jersey and Maryland. Other states are toughening drilling regulations, and the industry is responding with tighter wastewater management, while the Environmental Protection Agency is expected to complete a study on fracking next year. Nevertheless, gas shale drilling appears likely to continue at a fast pace in the most important gas-producing states.

The rest of the world is watching. Moratoriums have been put in place in parts of France, Germany, South Africa and the Canadian province of Quebec; Britain, Ukraine and other countries are moving cautiously forward. Still, the Energy Department projects that gas from shale could account for 14% of global supplies by 2030, with as many as 32 countries having production potential.

If world countries, led by the U.S., continue to disregard environmental objections to fracking, enhanced natural gas production combined with a major increase in oil production by the U.S. will further subvert incentives toward ending use of fossil fuels. So far, shale gas extraction in the U.S. has increased 500% in the last five years, and that’s just the beginning.

Quoting Ivan Sandrea, president of the Energy Intelligence Group, the Times concluded its article with these words: “The fossil fuel age will be extended for decades. Unconventional oil and gas are at the beginning of a technological cycle that can last 60 years. They are really in their infancy.”

It has been five months since Democratic former Vice President Al Gore stuck his neck out in an article he wrote for Rolling Stone by publicly criticizing Democrat Obama for inaction on reducing America’s addiction to fossil fuels. So far, Obama has done nothing but live up to Gore’s critique:

has thus far failed to use the bully pulpit to make the case for bold action on climate change… The president made concessions to oil and coal companies without asking for anything in return. He has also called for a massive expansion of oil drilling in the United States, apparently in an effort to defuse criticism from those who argue speciously that “drill, baby, drill” [a conservative slogan] is the answer to our growing dependence on foreign oil.

Washington’s refusal to take more than token steps to alleviate global warming would be relatively inconsequential were the U.S. a much smaller player on the world stage. But American governments have insisted for decades — based on economic strength and unparalleled military power — on being recognized as the world’s dominant and irreplaceable hegemonic state.

Uncle Sam’s leadership is enormously influential, especially in the industrialized world, and America’s sluggish response toward global warming is a global disincentive toward taking speedy, responsible and united action.

U.S. financial institutions, corporations, and the wealthiest proportion of its population are “deeply invested in an energy sector dominated by fossil fuels, and actively hostile to alternatives,” economist Paul Krugman noted recently. These powerful elements are not prepared to accept the economic and political rearrangements required to transform America into an environmentally sound society of minimal carbon usage and many other ecological safeguards.

Such a transformation involves greater government investments, potentially smaller profits for many years, strategic alterations in the country’s disproportionate consumption of resources and products, and substantial changes beyond today’s gridlocked and essentially conservative political process.

In effect — given its disinclination to interfere in the workings of America’s neoliberal capitalist economy, even to protect all life on Earth — Washington’s continuing unipolar leadership is guiding the world toward irreversible climate change.

The U.S. may change its ways, but economic and political realities suggest an alteration of this magnitude is hardly on the foreseeable agenda. Climate change, however, is taking place now. At issue are two necessities: (1) strengthening of the environmental and social change movements in the U.S., and (2) a dramatic initiative by other powerful countries and regional blocs to take significant concerted global action to save the Earth regardless of Washington’s dithering.

[Jack A. Smith was editor of the Guardian — for decades the nation’s preeminent leftist newsweekly — that closed shop in 1992. Smith now edits the Hudson Valley Activist Newsletter, where this article also appears. Read more articles by Jack A. Smith on The Rag Blog.

1 Response to Jack A. Smith : The U.S. and Irreversible Climate Change