James Howard Kunstler : A Blue Christmas with Avatar and Tiger 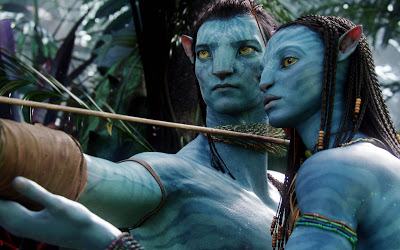 What is most amazing about Mr. Cameron’s holiday blockbuster is the explicit message that America is a society that deserves to be punished (and humiliated!) by others who manage their own relations with reality better than we do.

As the end-credits rolled for James Cameron’s new movie, Avatar, the audience burst into rowdy applause. It seemed to me that they were applauding the sheer computerized dazzlement of the show — but in the story itself they had just watched the U.S. suffers a humiliating defeat on a distant planet. In the final frames, American soldiers and the corporate executives they had failed to protect were shown lined up as prisoners-of-war about to embark on a death march.

More to the point, the depiction of our national character through the whole course of the film was of a thuggish, cruel, cynical, stupid, detestable, and totally corrupt people bent on the complete destruction of nature. Nice. And the final irony was that Cameron had used theatrical technology of the latest and greatest kind to depict America’s broader techno-grandiosity — as the army’s brute robotic warriors fell to the spears and arrows of the simple blue space aliens.

Altogether, it was a weird moment in entertainment history, and perhaps in the American experience per se. No doubt audiences overseas will go wild with delight, too, but perhaps with a clearer notion of what they are clapping for than the enthralled masses of zombie Americans.

The infatuation with technology, and the disgusting cockiness that goes with it (so well-captured in Avatar), is but one facet of the psychosis gripping the nation — and by that I mean the profound detachment from reality. We have no idea what is happening to us and, naturally, no idea of what we are going to do.

I sat in a bar Friday evening with a financial reporter from a national newspaper, trying to explain the peak oil situation and what it implied for our economy. He had never heard it before. The relationship between energy resources and massive debt was new to him. (It also came up in conversation that he could not tell me what the Monroe Doctrine was about, despite a history degree from Yale.) There you have a nice snapshot of the mainstream media in this land.

This year, America can look for a nice lump of coal in its Christmas stocking. That lump will be called “the recovery.” This recovery consists of a massive self-deception, made up of accounting tricks and falsified statistics, with a sugar-coating on top of sheer disbelief that the outcome could be anything but a particular happy ending — namely, the continued levitation of the unsustainable.

What is most amazing about Mr. Cameron’s holiday blockbuster is the explicit message that America is a society that deserves to be punished (and humiliated!) by others who manage their own relations with reality better than we do. I wonder how much that will secretly account for its popularity. I wonder what the leaders of China will make of it.

Is it not also amusing that golf is even taken seriously as an athletic pursuit? I mean, why not pancake-flipping? Or dice? Or shooting rats at the landfill? This is the kind of knucklehead culture we have become after six decades of the softest life imaginable. Anyway, I’m not shedding any tears for Tiger. Even if all his endorsements dry up and his ex-wife takes him to the cleaners for a hundred million or so, he’ll still be left with enough cash to pay for porn stars and lobster tails until the end of time, especially if he keeps his tipping policy at its current level.

1 Response to James Howard Kunstler : A Blue Christmas with Avatar and Tiger