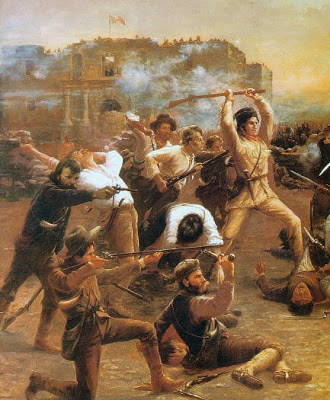 “Fall of the Alamo.” Painting by Robert Onderdonk / Friends of the Governor’s Mansion.
Barbarians at the gates:
The Alamo election

Our national 2010 midterm elections demonstrated that many citizens of the United States now suffer a siege mentality: against the Islamic world and other perceived barbarians at our gates; against socialists, homosexuals, minorities, and recent immigrants, documented or not. That turns out to be the majority of the Earth’s humans, many of whom reside among us. We are a house divided against itself.

Whites of European ancestry professing heterosexual Christianity have run the show in the USA since before the country’s independence. They are now feeling surrounded and outnumbered as the United States more accurately reflects the proportional population of the planet.

The paranoia of the powerful old guard goads them to tweak the Constitution: “Freedom of religion? Great — except for Islam. Freedom of speech? Certainly — as long as it doesn’t affront our majoritarian values. A presumption of innocence? Everyone’s entitled to that except terrorists of course, whom it’s okay to torture and lock up indefinitely.”

Members of the straight, white majority feel themselves slipping into minority status in our multi-cultural society. Their nativist rage and increasingly vocal intolerance reflects their fear of losing a power based less on achievement than on skin color and inherited privilege. They have taken to hiding behind hate speech and ever-higher walls of gated communities. While such fears may be understandable, they are not acceptable.

If our society is to meet the many daunting challenges ahead of us, it’s counterproductive to refight battles for racial and religious and cultural tolerance that we won more than 200 years ago. We can not afford to be squabbling over who is “more American” as the world burns. We have to move on.

Several years ago I published a book tracing the profound influence of Texas values on U.S. political policies of the past 200 years. The creation myth of Texas warrior culture is the battle of the Alamo in 1836. The Alamo myth — still taught in Texas public schools — conjures a small band of 180-odd freedom fighters battling for independence against a much larger Mexican force bent on suppressing their rights.

But it was a borrowed revolution. The only native Texans in the Alamo were those of Mexican descent. Whites who died there — of Scots-Irish ancestry — came from Tennessee, South Carolina, and elsewhere. Driven by violent race hatred, these men killed Native Americans with impunity and enslaved Blacks, before rising against the Mexican authorities largely because they despised their skin color, language, and religion.

After they died in the Alamo their martyrdom ignited racist outrage and a thirst for vengeance that remains unslaked almost 200 years later.

The astonishing rate of execution in Texas — which accounts for more than a third of all U.S. executions — is only one vestige of the retributive “take no prisoners” Alamo attitude. Minorities are disproportionately represented on death row in Texas, as they are in the general prison population nationwide. Texas — like many candidates for public office in the 2010 elections — makes a show of circling the wagons to keep “them” (outsiders) at bay.

Such primitive behavior is not logical. But logic is not the point. When right-wing extremists opine that Barack Obama holds a “Kenyan, anti-colonial world view” it sounds nonsensical. It’s a code phrase meant to signify that Obama is not one of “us” (right-thinking traditional Americans, white and Christian).

The right tried to make the election about the non-Caucasian, perhaps socialistic, Islamic sympathizer, Barack Obama. He represents many nativist fears of change. His attempts to conciliate his enemies cannot succeed because their hatred of him is not logical, or based on any policies. It is visceral and beyond rational discourse.

Rush Limbaugh has said of the president, “I hope he fails.” Senate Republican leader Mitch McConnell said, “Our goal must be to make Obama a one-term president.” Not a single positive policy suggestion sullies the agenda of Obama’s enemies. All they want, the country’s welfare be damned, is to wrest control of the agenda for their corporate masters.

The very hope Obama’s election offered the rest of the world, that the United States might rejoin the global community of nations for the common good, is what worries conservatives most. The problem and paradox is that the harder and dirtier Obama’s political enemies fight to exclude Obama and his ilk and maintain “purity,” the less of the republic there is to save.

We must not allow the American democratic experiment to end in suicidal bigoted imperial rage. Those who would recreate the Alamo will share its fate.

[James McEnteer is the author of Deep in the Heart: the Texas Tendency in American Politics (Praeger 2004) and other books. He lives in South Africa.]