James McEnteer :
The devil went down to Georgia 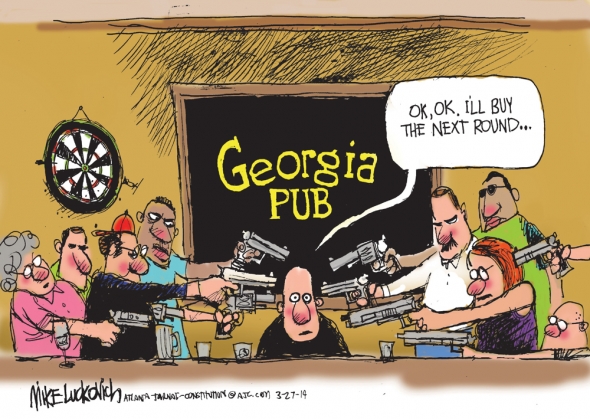 “Some say the world will end in fire, some say in ice. From what I’ve tasted of desire, I hold with those who favor fire.” – Robert Frost 1920

“And it’s not surprising then they get bitter, they cling to guns or religion or antipathy toward people who aren’t like them or anti-immigrant sentiment or anti-trade sentiment as a way to explain their frustrations.” – Barack Obama 2008

Euphemistically called the “Safe Carry Protection Act,” the new law lifts restrictions on individuals convicted of certain misdemeanors from obtaining a gun permit. Gun dealers are no longer required to keep sales records. A stand-your-ground law will expand and police will not have the right to ask armed citizens whether they have a license.

For those shocked by the massacre of young Connecticut school children in 2012, or uncountable shootings in American offices, movie theaters, streets, and homes, Georgia’s decision to invite more guns into more places with fewer restrictions might seem counter-intuitive or even insane. But part of the point of this legislation seems to be to give the finger to rational “liberal” expectations.

And radically relaxed gun controls may only be an interim step. Last year the town of Nelson, Georgia, passed an ordinance requiring mandatory gun ownership for its citizens. In Nelson, you do not have the right NOT to bear arms, a proscription of freedom that stands the Second Amendment on its head.

We can already predict certain outcomes of Georgia’s legislation.

We can already predict certain outcomes of Georgia’s legislation. More children will shoot themselves or others with firearms they happen upon in their homes. Rick Santorum says “A well-armed family is a safe family.” Of course, the opposite is true. More arguments will turn fatal as shouting matches and fist fights escalate into impulsive, opportunistic gun homicides before folks have a chance to cool off and stand back, simply because the guns are at hand.

One proponent of the new Georgia law claims it will “restore our right to carry and be allowed to protect ourselves anywhere we go. Bad guys are all over the place, in case you haven’t been reading the paper or watching TV. If you disarm me to where I can’t protect myself or defend myself, all you’re doing is empowering the bad guys.”

The person who shot and killed a man in a Florida movie theater for texting on his cell phone was a retired police officer. Good guy or bad guy? That’s a false distinction. Was the new bride who shot and killed her niece in an argument over who should be the designated driver a good person until possessed by demon rum? Do we let the courts decide? That’s a little late for the victim.

Bad guys are in the news. Television news especially shows us a mad, dangerous world. As do cop shows and violent movies. But who are the bad guys? Foreigners? Most of our murderers are homegrown. What about Muslims? Non-Muslim killers outnumber them overwhelmingly in the USA. Racial minorities? Political terrorists? The United States kills many civilians with drones in various countries. Targeting bad guys while murdering good guys, women and children.

In our modern, militarized society we live with obscene euphemisms such as “collateral damage” and “friendly fire,” to obscure the violent horror and death our foreign policy inflicts on human beings around the world. We have officially chosen “enhanced interrogation” — aka torture — as acceptable national policy. Violence begets violence. Capital punishment is state murder, enhancing the climate of violence. The murder rate is highest in states which execute people.

We respect the sovereignty of no nation other than our own. We plant our military bases wherever we want and invade countries as we will. Millions around the world fear our trigger-happy ways. To them, we are the bad guys.

Road rage, hair-trigger arguments over sporting events or parking spaces, politics or religion, drunk or sober, may spark the violent anger that resides just under the skin of many Americans, waiting any excuse, however trivial, to ignite. Easy access to firearms converts this incipient anger into a potentially fatal incident. We are afraid of the bad guys in one another. We are afraid of ourselves.

We know who we are. Our people took the lands they wanted by force. That is our heritage. We killed or enslaved anyone of any race who opposed us. We tamed the American frontier with a rifle in one hand and a Bible in the other. The Bible rationalized our superiority over others of different hues and views. The rifle enforced it.

We are the inheritors of that Manifest Destiny, turning our kill-or-be-killed values on one another as our patrimony slips away and exporting those values around the world. Thus we forfeit our moral leadership in the community of nations. We have lost our way and we know it.

In our fear and our anger we lash out at one another, cursing immigrants, infidels, minorities, the government, or those of different political persuasions. Does it take a gun to restore our sense of potency?

Death by Paranoia. That is how and why we will go down. Our demise as a culture and perhaps a species is avoidable but probably inevitable. We are dinosaurs by choice, refusing evolution not only for our ancestors but for ourselves. Nothing like bullets for cutting through complexity. Even as we fire them at one another.

1 Response to James McEnteer :
The devil went down to Georgia