Fidel Castro and the Castration of U.S. Latin American policy. 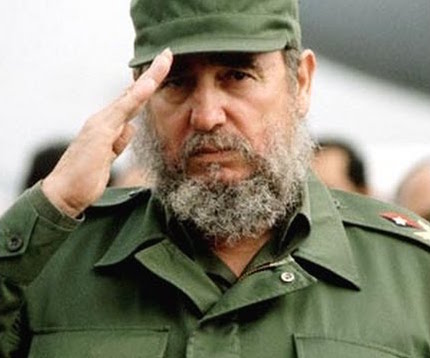 When Fidel Castro died in his sleep at 90 on November 25 in Havana, American news consumers might have been forgiven for thinking he was slain in battle.

“Today, the world marks the passing of a brutal dictator who oppressed his own people for nearly six decades,” said Donald Trump, according to CNN.

“Fidel Castro’s legacy is one of firing squads, theft, unimaginable suffering, poverty and the denial of fundamental human rights. While Cuba remains a totalitarian island, it is my hope that today marks a move away from the horrors endured for too long…” Trump promised to join with the Miami Cubans toward a future in which “the Cuban people can finally begin their journey toward prosperity and liberty.”

That should make the Cubans afraid. Very afraid.

The Daily Beast’s John Avlon excoriates Castro as ‘a bully and a thug.’

As jingos jeered and cheered, even journalists you thought must know better leapt upon the burning bier. In an article entitled, “Fidel Castro Finally Dies,” The Daily Beast’s John Avlon excoriates Castro as “a bully and a thug: the latest in a long line of self-interested opportunists who rule through fear and pretend that it is love.”

Avlon condemns everyone who swallowed the myth of Castro as a revolutionary hero:

One of the most prevalent forms of moral myopia on western campuses and their downstream affiliates is a tendency to excuse whatever oppressive totalitarian violence is committed in the name of the left.

… And when the full story of Castro’s personal enrichment and paranoid hold on power for more than a half-century at the expense of individual rights and individual life becomes better understood, those folks who fell for the combination of political myth and personal charisma, the late night conversations over drinks and cigars, will have been exposed as enablers to his tropical tyranny.

Is Avlon jostling for a position with the Trump Regime?

Not only does Avlon try to drive a silver stake through Castro’s black heart, he despises and demonizes anyone ever naïve enough to think Castro was anything but a selfish tyrannical dictator. It’s the idiom of Trumpian bombast, not reasoned discourse.

Avlon condemns Castro’s politics and methods but ignores his tactical genius, his immense courage, his decades-long political survival balancing act, and his many educational advances in the face of a cruel and stupid U.S. blockade that began decades ago and continues today. That blockade imposed hardship and suffering on the Cuban people, but never threatened the Castro regime.

Before Fidel Castro took power in 1959, Cuba suffered under generations of U.S.-backed dictatorships that kept 60 to 70 percent of Cubans in poverty. The island was a U.S. tourist vassalage and sugar plantation, starting in 1898 when the Americans drove out the Spanish. Congress passed the Platt Amendment in 1901, giving it license to meddle in Cuban affairs. And meddle it did, discarding inconvenient rulers and installing complaisant puppets at will.

The consummate marionette was an Army sergeant named Fulgencio Batista, who led a military coup in 1933. He enriched himself and suspended civil liberties and when his popularity waned he brought in the U.S. Mob to open casinos and help run interference with his own people. U.S. corporations loved him but Cubans hated him. Batista stayed in power by ever more drastic measures. When he lost a presidential election, he staged another coup. But many Cubans were fed up with the prostitution and gambling that sustained him.

For most Cuban people, who led impoverished lives under Batista, Castro was a blessing.

Batista was still in power in 1959 when Fidel Castro and a few dissidents invented a guerrilla war that became a revolution. For most Cuban people, who led impoverished lives under the rapacious Batista, Castro was a blessing. He gave them literacy and self-respect. He took them seriously and they loved it.

Castro encouraged education on all fronts. Cuba became a medical pioneer and treatment center, turning out doctors and making medical advancements despite the intransigent U.S. blockade. Cuba has long exported medical help and training to many poor nations in Latin America and Africa, who have no other resources. Treating patients who never saw a doctor before, Cuba has become beloved in many dark corners of this planet where U.S. aid has never been seen.

Castro’s example electrified Latin America. From his small island he had faced down the almighty gringos and made them blink first. That was his greatest threat to the United States. Castro inspired many people in various countries living under U.S.-supported despotic regimes — who until then considered their situations inevitable and intractable — to rise up against inequality and injustice

Fidel was the godfather of Latin America’s leftist turn: in Nicaragua, Honduras, Venezuela, Bolivia, Ecuador, Argentina and Brazil. The populist spirit has always been embattled in Latin America. Fidel proved it could triumph. He survived the regimes of 10 U.S. presidents, each of whom figured to crush him and none of whom could.

Fidel Castro was no saint. But he was not the corrupt, bloodthirsty despot Trump and Avlon make him out to be. He was a perspicacious fellow who knew the political score at an early age and took action. That makes him a hero. Many see the wrongs of this world but very few move to right them. Castro did.

Their quixotic action was the spark that ignited an incipient rage for justice.

It is worthwhile finding out in detail about how he organized his “invasion” of Cuba from Mexico. With a few dozen men, Fidel Castro crash-landed a leaky boat in the middle of nowhere and took to the hills to oppose the entrenched, oppressive U.S.-backed Batista government. The odds were never in their favor. But their quixotic action was the spark that ignited an incipient rage for justice, in Cuba and beyond.

Fidel Castro was the Road Runner to the USA’s Wile E. Coyote. He withstood decades of intrigue against him by the United States, including assassination attempts, a naval blockade and military invasion. He played the Cold War superpowers off against each other in a high-stakes gamble for his nation’s survival. Trump and Avlon’s defamatory anger bespeaks their frustration with a smarter, braver political opponent. Millions around the world loved the show.

Fidel Castro was a rare symbol of hope and independence among darker, militaristic spheres of influence, a political giant of the twentieth century.