Jay D. Jurie : Vietnam and the Historic Struggle Against ROTC 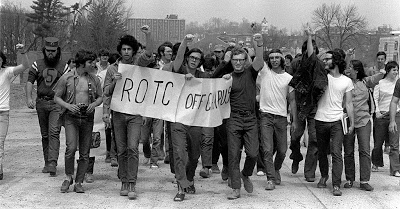 Marchers in 1970 want ROTC removed from the campus of Ohio University. Image from Cape Girardeau History and Photos.

Part I: ROTC and the anti-war movement

They held regular drills on an open field approximately two blocks from the heart of campus. It was viewed as an affront that ROTC paraded so openly while the carnage mounted in Vietnam.

[This is the first of a two-part series on ROTC (Reserve Officer Training Corps) — dealing with the militant opposition to ROTC during the Vietnam War era, and with the program’s recent resurgence on college campuses. The author was at Boulder and participated in the demonstrations he describes. Similar actions occurred at campuses throughout the country.]

Carrying an upside-down U.S. flag tacked onto a short wooden stake, a student at the head of a column of anti-Vietnam war students marching onto a University of Colorado practice field was tackled by several pro-war student athletes.

As the protest column continued to press onto the field the “jocks” and police struggled to bring it to a halt. They were unsuccessful and the protestors made their way through the ranks of parading cadets, turning the drill into a melee. This April 30, 1970 event was not the first time such a drill had been disrupted on the Boulder campus.

Early in the fall of 1969, members of the Student Peace Union (SPU) approached their counterparts in the Students for a Democratic Society (SDS) with a proposal.

SPU had decided the Reserve Officer Training Corps (ROTC, pronounced “rotsee” by friend and foe alike) was the most visible manifestation of the Vietnam War on campus. While SDS elsewhere had devoted some attention to ROTC, this had not particularly filtered down to the Boulder chapter as an “action item.” SPU’s proposal was that SDS partner in demonstrating against ROTC.

At that time, ROTC held regular drills on an open field approximately two blocks from the heart of campus. SDS readily agreed with the SPU proposal, not only because of the high profile, but because it was viewed as an affront that ROTC paraded so openly while the carnage mounted in Vietnam.

It was agreed that the target of the protest would not be the individual cadets enrolled in ROTC, but the program itself and its relation to the University, the military, and the war. SDS put out a very simple flyer that read only:

When the day of protest came, the two organizations, along with their supporters, met at the student union fountain area and marched to the field where the ROTC drill was already under way. Proceeding onto the field protestors marched to and fro through the ranks of parading cadets and confusion reigned. There was no violence, but the drill was disrupted. ROTC instructors sized up the situation and called off the exercise.

At the next ROTC parade, the protest was repeated. Though they again marched from the fountain area together, relations between SPU and SDS were cool. From the outset it was clear there was a tactical dispute. SPU wanted to be a visible presence and make a statement in opposition to the war and ROTC on campus, while SDS wanted to do everything in its power to “stop the war machine” and end the killing.

Nearing arrival at the field, the column of protestors split into two, with SPU heading to the side of the field, and SDS marching toward the drill. This time, campus police were better prepared. They formed a cordon along the edge of the parade ground to prevent the SDS contingent from reaching the drill. However, SDS moved quickly and did an end run around the police line. As before, protestors managed to run through the ranks of drilling cadets and chaos ensued. There was no violence, but the drill was again disrupted.

Apparently the police realized that if they chased the protestors across the field they would only contribute to the disruption. Again, ROTC instructors called off the drill. SDS was elated, believing the system had been beaten twice and one small corner of the war machine had been shut down, at least temporarily. 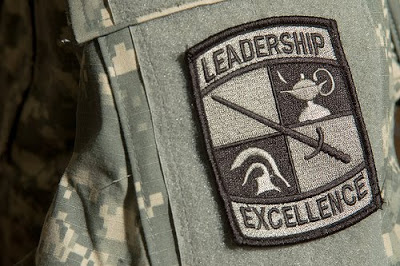 There was one more “ROTC smash” that fall, but by this time, in disagreement with SDS tactics, SPU had dropped out of the partnership. SDS figured the police would be too well prepared for a third successful march onto the field. Instead, when the marchers neared the field, they abruptly veered off and headed toward the stadium, where ROTC had its offices. Campus police rapidly redeployed and kept pace with the SDS march.

Outside the ROTC offices, a couple of SDS leaders were making the usual anti-war speeches when the campus police chief noticed smoke billowing from the area where the ROTC parade was underway. He quickly realized they’d been duped. Several police officers stayed with the rally to keep an eye on the demonstrators and ensure the ROTC offices were protected, while the main force ran back to the field.

At that point, the protestors had a good laugh and dispersed. In the planning for the event some SDS members had volunteered to throw smoke bombs onto the field. This was not done in such a way as to cause any harm, but to make a symbolic point about the bombing of Vietnam, and to sow confusion and hopefully yet again cause disruption. In this respect the action was a success, as were all the ROTC “smashes” that fall. No one was injured, and remarkably, no one was kicked out of school and there were no arrests.

By the spring of 1970 both the SPU and SDS chapters were defunct. Filling the void of campus anti-war activism at the University of Colorado was the Student Mobilization Committee (SMC), a front group for the Young Socialist Alliance (YSA), the youth affiliate of the Trotskyite Socialist Workers Party (SWP). Meanwhile, the depredations of the Nixon-Kissinger regime in Southeast Asia had intensified. Campus awareness and activism across the country, and at the University of Colorado, reached its zenith that spring.

Students who were more militant, including many previously affiliated with SDS, became the very uneasy left-wing “junior partner” under the SMC umbrella. The dominant YSA faction, strategically if not ideologically, fulfilled the role played by SPU the previous fall. While a variety of anti-war actions took place early in the year, including an occupation of the first floor of the administration building, ROTC was not forgotten. 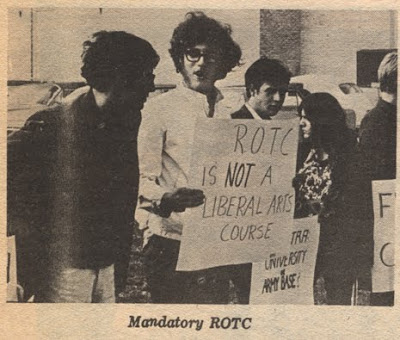 It was decided by late April that ROTC would once again be a “smash” target. This time, it was understood well in advance by all in SMC that there would be a divergence over tactics. As before, marchers gathered at the fountain area and set off for the ROTC drill field. This time the protest was larger, with 300-500 participating. When the field was reached, the larger YSA-affliated contingent peeled off and, in keeping with their strategy of mass rallies, like SPU the preceding fall, assumed positions along the sidelines.

Campus police turned out in full force, accompanying the march all the way to the field, where they formed a much larger cordon than before and were more fully equipped for a riot. Determined they were not going to be stopped, the more militant faction of SMC marched directly toward the line of police. Aligned with the police was a contingent of about 30 “jocks.”

As the two sides converged, the previously described scuffle broke out. Police chased demonstrators on and off the field. Police parked in cruisers adjacent to the field pursued some who fled across campus. Some students were handcuffed to a nearby chain link fence as the arresting officers returned to the fray. A student who thoughtfully came equipped with a handcuff key surreptitiously set them free.

On this occasion, a number of people were tackled, knocked down, shoved, punched, or grabbed. While there was violence, there were no serious injuries. Most of the violence was initiated by the jocks, a fact which the police ignored, and no jocks were arrested. It was widely believed by protestors that an understanding had been reached between the police and jocks beforehand.

Since some of those arrested had stayed on the sidelines, it was abundantly clear the University strategy was to target and get rid of those they identified as leaders of the campus anti-war movement. Nine of the anti-war students were arrested at the scene and nine more were subsequently charged with violating Colorado’s newly-enacted “Campus Disorder Act.”

As it turned out, no one was ever tried for the Boulder “ROTC smashes” of 1969-70, though after the 1970 protest several were suspended from school for varying lengths of time. Eventually, the case of the “Boulder 18” wound up in front of the Colorado Supreme Court, which ruled the statute unconstitutionally vague, threw it out, and quashed the charges.

Not knowing this would be the final “smash,” the University moved all ROTC drills inside the football stadium, where they could control access. For their part, Boulder’s anti-war protestors won at least a minor victory by visibly exposing University complicity with the military and the war. While ROTC was not forced off campus, the protests resulted in some change of “business as usual.”

Part II will cover the history of the ROTC program, the issue of discrimination against gays, and the recent return of ROTC to a number of U.S. campuses.