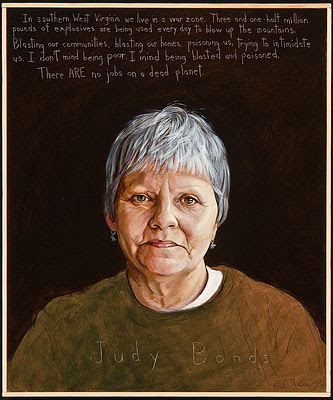 She has been to the mountaintop, and now we must fight harder to save it.

She was a tireless, funny, and inspiring orator, and a savvy and brilliant community organizer. She was fearless in the face of threats. As the godmother of the anti-mountaintop removal movement, she gave birth to a new generation of clean energy and human rights activists across the nation. In a year of mining disasters and climate change setbacks, she challenged activists to redouble their efforts.

As one of the great visionaries to emerge out of the coalfields, Julia “Judy” Bonds reminded the nation that her beloved Appalachians had been to the mountaintop — and in her passing last night, thousands of anti-mountaintop removal mining and New Power activists from around the country are reminding the Obama administration and the country’s environmental justice movement of Bonds’ powerful legacy and parting words to “don’t let up, fight harder and finish off” the outlaw ranks of Big Coal and end the egregious crime of mountaintop removal.

In a special email message last night, Coal River Mountain Watch director Vernon Haltom announced the passing of Bonds, the Goldman Prize winner and Executive Director of Coal River Mountain Watch. Bonds, 58, had battled advanced stage cancer over the past several months. “One of Judy’s last acts was to go on a speaking trip, even though she was not feeling well, shortly before her diagnosis,” Haltom wrote.

“I believe, as others do, that Judy’s years in Marfork holler, where she remained in her ancestral home as long as she could, subjected her to Massey Energy’s airborne toxic dust and led to the cancer that wasted no time in taking its toll. Judy will be missed by all in this movement, as an icon, a leader, an inspiration, and a friend.”

Here’s a clip from a special tribute to Judy by On Coal River filmmakers Adams Wood and Francine Cavanaugh:

A little more than a decade ago, sitting on the coal dust-swept front porch with her grandson — the ninth generation of their family to reside in Marfork Hollow in West Virginia — Bonds was outraged to hear her 7-year-old grandson describe an escape route should a nearby massive coal waste dam break and flood their valley. “I knew in my heart there was really no escape,” Bonds told an interviewer in 2003. “How do you tell a child that his life is a sacrifice for corporate greed? You can’t tell him that, you don’t tell him that, but of course he understands that now.”

Forced by an encroaching strip mine to move from her family’s ancestral land, Bonds spent the next decade as a full-time crusader (and coal miner’s daughter) to bring her grandson’s message of central Appalachia’s role as a national sacrifice zone from the devastating impact of mountaintop removal strip mining to millions of Americans across the country. 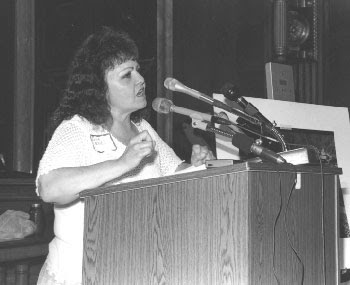 Judy Bonds delivering a speech in Washington, D.C. 2002
calling for the end to mountaintop removal. Photo by Deana Steiner Smith / Living on Earth.
For fellow activist Bo Webb, who went to jail and organized side-by-side with Bonds for years in the Coal River Valley, Judy was one of the better angels of our nature:

Judy was one of God’s most loyal and dedicated Angels in the battle of good vs. evil. I will miss her, we will all miss her. After much suffering, she now stands before God, without doubt holding a very special place in His heart. May God bless and comfort those that love and adore Judy. May God bless and comfort her wonderful family, and may God give us the unity and conviction to fight on in her honor and His name.

“Judy Bonds was our Hillbilly Moses,” added Bob Kincaid, president of the Coal River Mountain Watch board. “She knew better than anyone that we WILL make it to the Promised Land: out of the poisonous bondage of coal companies. She will not cross over with us on that great day, but her spirit will join us, and inform the freedom that sings from our hearts. Mother Jones, meet Judy. Judy, Mother.”

In a special Living on Earth radio interview with Jeff Young in 2003, Bonds recalled her grandson holding a handul of dead fish contaminated by coal waste. “And I looked around him and there were dead fish laying all over the stream. And that was a slap in the face.”

From the United Nations to the halls of Congress, and at universities and conferences from Maine to California, Bonds testified to the ravages of strip mining on her community’s waterways, economy and culture. Her riveting speeches galvanized activists from the hollers to the urban neighborhoods, and among national environmental organizations.

“Judy was a strong, powerful voice that always sang wisdom, inspiration, passion and determination to my soul,” wrote Chris Hill, the National Field Organizer for the Hip Hop Caucus in Washington, DC. “She was a voice that will forever speak volumes to the reasons why I fight for justice from the mountains to the inner cities.”

“During an E.P.A. action last March, I saw her beaming with a big smile and much excitement as we worked together to make mountaintop removal a national issue and take the fight to end it out of the hills and hollers of Appalachia into offices of the power-holders in Washington D.C.”

“She inspired thousands in the movement to end mountaintop removal and was a driving force in making it what it has become,” Haltom wrote in his email message to national activists.

“I can’t count the number of times someone told me they got involved because they heard Judy speak, either at their university, at a rally, or in a documentary. Judy endured much personal suffering for her leadership. While people of lesser courage would candy-coat their words or simply shut up and sit down, Judy called it as she saw it. She endured physical assault, verbal abuse, and death threats because she stood up for justice for her community.”

“One of the happiest days of my life was when we announced the funding for a new school to replace Marsh Fork Elementary,” said filmmaker and activist Jerry Cope, who worked with Coal River Valley residents to move a school imperiled by coal dust and a dangerous coal slurry impoundment. “Without Judy’s inspiration, I would have never become involved and she will forever be a source of inspiration to me.”

In a special tribute to Judy by filmmakers Jordan Freeman and Mari-Lynn Evans, Judy asked for the right to go home. “I miss my home,” she pleaded. “I want to go home.”

Like generations before her, Judy Bonds has finally gone home to her Marfolk Holler.

And thousands of coalfield residents, activists and leaders will continue the battle to ensure that Coal River Mountain — the last mountain — remains in her view, and mountaintop removal is abolished once and for all.

[Jeff Biggers is an award-winning journalist and cultural historian. He is the author of Reckoning at Eagle Creek: The Secret Legacy of Coal in the Heartland, winner of the 2010 David Brower Award for Environmental Reporting and the Delta Award for Literature. This article was published and distributed by CommonDreams.]