Jim Simons : Sargent Shriver and the Forgotten War Against Poverty 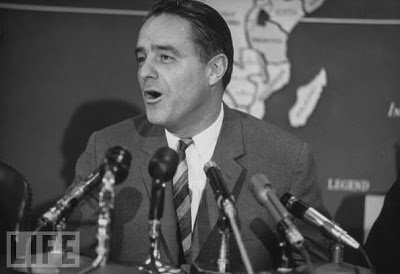 R. Sargent Shriver, the exuberant public servant and Kennedy in-law whose career included directing the Peace Corps, fighting the War on Poverty, ambassador to France and, less successfully, running for office, died Tuesday [January 18, 2011]. He was 95. Shriver, who announced in 2003 that he had Alzheimer’s disease, had been hospitalized for several days. [….]

The handsome Shriver was often known first as an in-law — brother-in-law of President John F. Kennedy and, late in life, father-in-law of actor-former California Gov. Arnold Schwarzenegger. But his achievements were historic in their own right and changed millions of lives. [….] President Barack Obama called Shriver “one of the brightest lights of the greatest generation…”

Poverty in America:
Sargent Shriver and the forgotten war

I heard a recording the other night of the telephone conversation between LBJ and Sargent Shriver when Shriver was appointed to head the War on Poverty. Johnson said something like, “I want to get on with it and end poverty in America.” He said this as one might say, “I want you to bring me the newspaper,” as though it could and would be done.

Shriver became the Director of the Office of Economic Opportunity (OEO) when it started. There could have been no better person for the job. The legislation (yes, it actually passed Congress) was inspired, so the story went, by Michael Harrington’s milestone book The Other America. There was significant poverty in the world’s richest country at the midpoint of the 20th century and it was inexcusable. It was that simple.

No one lambasted Johnson for being taken in by a socialist. Indeed, Harrington was a democratic socialist as well as being an intellectual and social critic with strong publishing credits. If anyone did yell “socialism,” no one paid any attention. How times have changed.

The War on Poverty initiated a panoply of wide-ranging programs designed to eradicate poverty — Head Start, Legal Services, VISTA, and the big one, the Community Action Program (CAP). CAP put hundreds of local Saul Alinsky’s in the poor communities nationwide, organizing and mobilizing the poor to make fundamental changes designed to bring the people up out of poverty. 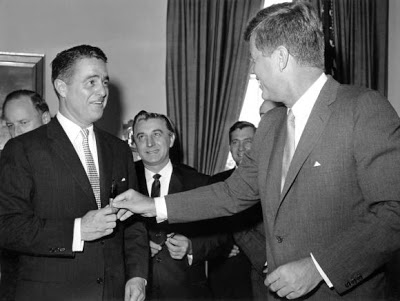 President John F. Kennedy with brother-in-law, Sargent Shriver, then director of the Peace Corps, after signing a bill giving the Peace Corps permanent status, Sept. 22, 1961. Photo from UPI.
Well, that was the theory. Oddly enough it was working to do just that when, finally, the predictable backlash came. Members of the establishment everywhere became riled up about the upset to the social order of their communities. If CAP had not been so effective we might never have heard from these representatives of the local power structures.

As it happened, newspapers editorialized and Congressional hearings were set in motion. Now came the chant of “socialism” and “communism.” OEO and the foment it swelled was every bit as big as the civil rights legislation of the same period. And it was working until backlash shut it down. Whenever there was a confrontation between the organized poor and the power structure, guess who prevailed.

Sargent Shriver died this week and I remembered that I had worked for him at OEO in 1966-1967. I met him once in Washington, D.C. and I believed in his commitment and ability to win the war on poverty. In the summer of 1966 he, or his deputy director, Edgar May, sent Peter Spruance of the OEO Office of Inspection (which May headed) to Austin where the Southwest Regional Office of OEO was. They wanted to find a suitable person to occupy the local Office of Inspection in the regional office.

Spruance, who was a lawyer from California, called Ronnie Dugger, editor of the (then) crusading liberal paper, The Texas Observer. I was working as Assistant City Attorney of Pasadena, the Houston suburb, and hating the job and the town. At this very time I was in Austin trying to find a job or some practice situation so I could live in Austin. I happened to call my friend Dugger and that is when he put me in touch with Spruance who interviewed me. As it is said, the rest was history.

So I was in a unique place and time to witness the winning of early skirmishes by the people and the ultimate losing of the war. The former was thrilling beyond words and I have never felt better about the work I was doing. The latter was among the saddest defeats I’ve ever been dealt, defeats for all of us as the ship went down. 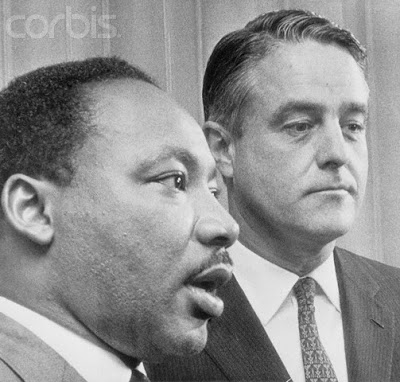 Sargent Shriver, then director of the Office of Economic Opportunity, shown with Dr. Martin Luther King, Oct. 24, 1966. Photo from Bettman / Corbis.
Over my two years at OEO the war in Vietnam was radicalizing me, to be sure. But the demise of the war on poverty set in motion in those years contributed to the process and probably had as much to do with my personal radicalization as did the war in Southeast Asia. They were interrelated wars. After that, I opted to open a basement law office to represent the peace and justice movement that had been waked in the country in the ‘60s. And that too was history.

But I have never forgotten the experience of the war on poverty, or for that matter, Sargent Shriver. I’ve always had immense respect for him. The times conspired to keep him from attaining high political office. I fear we will not see that caliber of person in politics unless the country changes more than now seems possible.

It is a big loss. But what strikes me as saddest of all is that the poor in America have been totally forgotten. No one talks of a war on poverty anymore. Supposedly progressive politicians speak of the middle class, not the poor. Everyone acts as if they don’t exist. There are more people in poverty now than in 1966 and it is getting worse all the time as the elite and the middle-class jockey for position in electoral politics.

When will we face again the challenge of ending poverty in America?

[Jim Simons practiced law in Austin for 40 years, representing many movement activists, including anti-war GIs. Jim served as a counsel for members of the American Indian Movement who were arrested at Wounded Knee in 1974. After he retired he published his memoir Molly Chronicles in 2007].

4 Responses to Jim Simons : Sargent Shriver and the Forgotten War Against Poverty