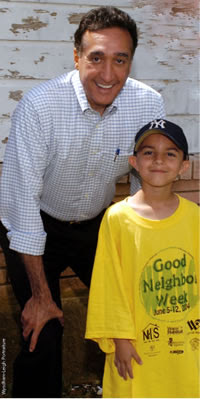 Henry Cisneros and friend: In the day.
San Antonio’s Cisneros ‘was on his way to becoming the Latino Obama before he cheated on his saintly wife’
By Melinda Henneberger / August 10, 2008

John Edwards is reminding me more and more of poor Henry Cisneros, who was on his way to becoming the Latino Obama before he cheated on his saintly wife, Mary Alice, while she was pregnant with their third child, a son born with no spleen and a malformed heart and stomach. Bill Clinton asked Cisneros to serve as his housing secretary anyway, a few years later, and by then, the affair was such old news that it never even came up during his confirmation hearings. Yet in the course of his background check for the cabinet post, Cisneros lied to the FBI – not about whether he was supporting his former mistress, but about the amount he paid her — and as a result, was subjected to a four-year investigation by a special prosecutor, a probe that cost taxpayers $9 million.

Heck of a public servant, Henry, so big-hearted and capable; watching him work a crowd in San Antonio back in the day, you’d have sworn you were looking at the future. But at some point after he stopped paying Linda Medlar, she started taping their phone calls, and triggered the investigation. When the judge who presided over his trial finally asked Cisneros why he’d lied in the first place, he explained that while he wasn’t positive himself about the amount he’d paid Medlar, he was positive he didn’t want his wife to know how high that figure was. He pled guilty to a misdemeanor, and when he left public life, we all lost out. So, what’s the relevance?

First, it’s that scary as we wives can be, federal investigators are scarier, and if any of the $15,000 a month that’s being paid to Edwards’ ex-girlfriend came from campaign funds, I cannot overemphasize how seldom fudging the facts with the Feds works out. Second, what do Monica Lewinsky, Linda Medlar and Rielle Hunter have in common? All were employees, and world-class blabbermouths. (You never really hear about the guys who get involved with the quiet types, do you?) It’s silly to say we don’t care if politicians fool around as long as they don’t lie about it; how is that supposed to work? And until we figure it out, we’re stuck pretending these people are perfect and then, we when find out otherwise, pretending we’re surprised.

As it is, we’re so perplexed about how to treat this stuff I can’t even tell what this first-person Newsweek piece is trying to say. In it, reporter Jonathan Darman tells about his own adventures with Rielle Hunter, a woman so fascinating that after meeting her on a trip to Iowa with Edwards in 2006, Darman spends weeks trying to track her down and months getting to know her. After concluding she’s an unreliable source, he keeps in touch anyway: “I continued to see her…I liked Rielle” and “let her do my astrological chart.” From the way he describes their first, boozy lunch, I can’t tell if he suspected she and Edwards were carrying on or not: Is the tone confessional because he missed the story, because he had the story and sat on it, or because he fell for the “I can tell you’re an old soul” hoodoo himself? (The last guy I knew who talked like that wound up blowing town with the life savings of several women who each thought they were going to marry him and start an ashram.) Hunter told Darman that in this incarnation, she wanted to help Edwards become a transformational figure on a par with Gandhi or MLK; better luck next time?