John McCain: His Own Best Caricature 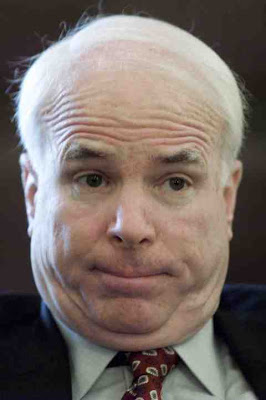 In what is labeled as discussion of Bob Dole blasting Scott McClellan (not altogether wrongly!) as a johnny-come-lately “miserable creature” motivated solely by profit to make his belated “revelations” about Bush & Co’s misdeeds, is this seeming non sequitur, which I pass along in honor of the real Memorial Day, May 31.

Reasons why Veterans, active duty personnel, and anyone who cares about them should not vote for McCain:

*AWOL for May 22nd vote on GI Bill. Expressed opposition to bill saying “it was too generous to Veterans”.

*Voted against Bill in September that would have mandated adequate rest for troops between combat deployments.

*Voted No on $1.5-billion increase for Veteran Medical services (money would have come from closing corporate tax loophole).

*Voted No on establishing a trust fund to bolster underfunded Veteran Hospitals.

*Voted No in May 2006 against $20-billion allotment for expanding Veteran Medical Facilities.

*Voted No in April 2006 to increase Veteran Outpatient care.

Bottom line, McCain is more interested in taking care of big business then the men and women he wrongly sent to fight in Iraq.”

This entry was posted in RagBlog and tagged McCain, Military, Presidential Campaign. Bookmark the permalink.