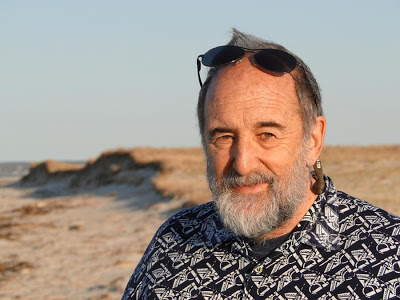 Allen Young, 2009. Photo by Diane Keijzer.
In and out of the closets:
An interview with journalist Allen Young

A week before Allen Young celebrated his 70th birthday, New York Governor Andrew Cuomo signed a bill legalizing same sex-marriage. The sexual revolution that had begun in the 1960s reached a crescendo, and there was much to celebrate at Young’s birthday bash.

Born in Liberty, New York six months before the bombing of Pearl Harbor, he’s been a life-long advocate of personal and political liberty, and all his life he’s been opposed to war. Since 1970, Young has been active in gay liberation and has written extensively about the oppression and the liberation of gay men and lesbian women.

In addition to books such as Gays Under the Cuban Revolution and anthologies he has edited with Karla Jay, such as Out of the Closets, he has written about his own region in Make Hay While the Sun Shines.

Once a reporter for The Washington Post, and, at the height of the cultural revolution of the 1960s, a mainstay at Liberation News Service (LNS), where he was a colleague of Rag Blog editor Thorne Dreyer, Young lives now in Massachusetts, writes a regular column for the Athol Daily News, and is an active citizen in his community.

In this interview with long-time Rag Blog contributor Jonah Raskin, he looks back at his life in journalism, the New Left, and Gay Liberation, and offers his reflections on the United States today: the mass media, right-wing politicians, and small towns.

Jonah Raskin: You’ve been a journalist most of your life. What’s the single most important change you’ve seen in your lifetime?

Allen Young: When I was growing up, the word homosexual rarely appeared in print. I never saw anything in print about gay people that was positive. That’s changed. There’s an often-repeated joke now that “the love that dare not speak its name won’t shut up.”

If there’s one story you’re proudest of writing what story is it?

It took courage to write about the persecution of gay men and lesbians in “revolutionary” Cuba. I’m particularly proud because I did not make excuses for this persecution, as others did, by blaming it on machismo and the Roman Catholic heritage in Cuba. Rather, I focused on the fact that this was ideology imported by Cuba from the international communist movement, going back to Stalinism, and enforced by a police state.

Although leadership was starting to become a dirty word in the late 1960s, often a synonym for elitism, I played a leadership role at Liberation News Service (LNS). I helped to mold the organization in the late 1960s into a well-organized collective with a stipend for its staff and a commitment to sending out news reliably.

Do you feel oppressed as a gay man in American society today?

I have great joy in my life, being partnered for 31 years, and with many supportive friends both gay and straight. But feelings of oppression linger because millions of Americans still regard people like me as inhuman, immoral, disgusting, and even monstrous. What also weighs heavily on me is the oppression experienced by gays and lesbians in nations around the world, especially Africa, Eastern Europe, and the Middle East.

Despite many outward signs of personal success, such as winning scholarships, becoming editor-in-chief of my college’s daily newspaper, having articles published in The New York Times, and later becoming respected in the New Left, I lived daily with a powerful feeling that I could never tell anyone who loved me (much less strangers) about my true nature. That kind of self-loathing and hiding is indeed hellish.

What would you say changed for you most of all after the arrival of gay liberation?

I could feel good about myself and I could be honest. That was huge. Leftwing ideology did nothing to liberate me as a gay person and this realization led me first to question dogma and then to reject it and all forms of zealotry.

When you see gay men these days who don’t know their history what might you say to them?

Don’t take for granted the freedoms you have and be aware that many people, even those around you, are living in fear. The lives of gay people were very restricted in the past, and a political movement was needed to bring about change. In more than half the states in the U.S., it’s still legal for employers to fire gay workers just because they are gay, for example. A movement is still needed.

Who would you say are the unsung heroes of gay liberation?

The Stonewall Rebellion took place in 1969. There were no more than 1,000 gay men and lesbians (as well as bisexuals and transgendered people) active nationwide in the post-Stonewall gay movement. In New York, there were only a few dozen people who attended meetings of the Gay Liberation Front and the Gay Activists Alliance and who demonstrated against the police, the media, and psychiatrists. To name a few names of heroes from those days: Ron Auerbacher, Bob Bland, Pat Maxwell, Step May, Roni Schnitzer, Ron Ballard, Jerry Hoose, Dana Gillespie, Marty Steffens, Suzanne Bevier, Mark Silber.

You’ve lived in rural Massachusetts for decades? What do you like about rural life?

The challenge of finding a way to relate to people with different worldviews and experiences. In urban environments, and in college towns, it’s too easy to conform and relate exclusively to people who agree with you. Life here is more “real.” 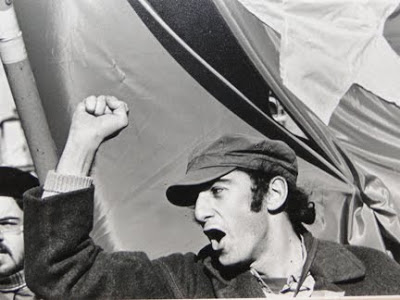 Allen Young, then with LNS, at an anti-war rally in Washington, D.C. in 1969. Photo by David Fenton.

Every decade of my life shaped me. I think of myself as an aging hippie and a Sixties person. I feel a special affinity with the many people who drastically altered their lives in the 1960s to combat the Vietnam War and “the establishment,” and who enjoyed marijuana and LSD, but much of this continued into the 1970s.

What do you miss about urban life?

What were the worst aspects of the New Left?

I have negative feeling, even shame, about the fascination with and glamorizing of armed struggle that was common in the New Left. I feel particularly bad about our insistence on displaying the flag of the National Liberation Front of South Vietnam. While opposing the war, we might have acknowledged that the NLF’s vision for Vietnam did not include civil liberties and democracy. New Leftists did a good job of expanding the ranks, but we did not do a great job of communicating with the rest of America.

And what about the best aspects?

The New Left emerged from the repressive McCarthy era and rejected the rigid and often dishonest dogma of the Old Left. Influenced by the beatniks, New Leftists challenged repressive American culture, including repressive drug laws, while celebrating the joyous and mind-expanding aspects of cannabis and psychedelics. The New Left presented a vision that would end racism, militarism, jingoism, and the exploitation of workers. There were hints of a loving community, though male chauvinism was a barrier.

What has surprised you the most about American life in, say, the last decade or so?

The widespread support for right-wing media, especially Fox News and stars such as Glenn Beck and Rush Limbaugh. I’m also surprised at the extent to which people have embraced political figures I find extremely unattractive and witless such as George W. Bush and Sarah Palin. I’m surprised how few people are outraged about the excesses of the rich and powerful.

What if anything would you do differently if you could go back and redo your own life?

I would have come out as gay in my teenage years so I could have enjoyable sex and romance in my life when I was my most youthful. Fortunately, I did have an important and exciting physical and emotional relationship with a college classmate, but it was characterized by a lot of fear and I could not make it endure despite efforts to do so.

Are you hopeful about the future and if so why?

I have mixed feelings about the future. I’m hopeful because I see many young people acquiring an interest in sustainable agriculture. I’m pessimistic because I see powerful forces throughout the world promoting violent solutions to problems and doing nothing to stop global warning and environmental degradation.

What do you look forward to in your own life?

I look forward to remaining active and healthy and enjoying the companionship of my long-term partner, and facing death with dignity. I hope that I won’t suffer from a debilitating disease and die a slow death. I would like to have physician-assisted suicide available to me if I need it.

You have friends and neighbors in your neck of the woods. What do you like most about them?

They make me laugh and appreciate my sense of humor. They share my appreciation of small-town life, the concept of community and respect and love for the natural world. It’s rare, around here, to find people motivated by greed or hatred, or who use violence to solve problems.

The small towns in New England, at least the ones I know best, accept nonconformity and have a strong sense of community. I like the quiet of country living and the opportunity to grow my own food.