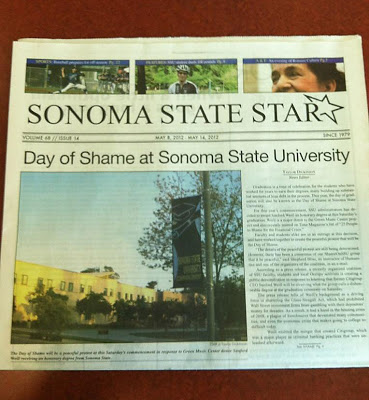 Everyone in the crowd seemed relieved that no one had shouted, thrown a pie in Weill’s face, or staged a sit-in on stage.

ROHNERT PARK, California — Sometimes, as Chairman Mao Zedong observed, a single spark can start a prairie fire. And sometimes the spark fizzles and the prairie lies there peacefully without a blaze.

For a really effective protest, activists apparently need more than a single spark. It helps to have several essential ingredients: an obvious issue or cause; a slogan that resonates; a dynamic leader or spokesperson; and brave souls prepared to risk failure, arrest, or rebuke from more cautious citizens.

Indeed, the May 2012 commencement ceremony at the normally sleepy Sonoma State University (SSU), one of the 24 campuses in the gigantic California State University system, had the potential to turn into a rowdy protest.

Protest 101 at SSU gained momentum in part because it was fueled by the Occupy Wall Street movement. The protesters had an obvious villain in Sanford Weill, the Wall Street billionaire responsible for the big financial meltdown of 2008 who would be on hand to receive an honorary degree. Not one but three strikes were against him. Largely responsible for the repeal of the Glass-Steagall Act that made it possible for bankers like him to turn into modern-day pirates, he looted the economy, and ran Citigroup into the ground.

Veteran reporter, Robert Scheer, helped to ramp-up local discontent in a column in The Nation, in which he called the billionaire a “jolly good Scoundrel” and claimed that he was “laughing all the way to the bank.”

To the outraged organizers of the protest, it was clear that Weill had bought his honorary degree with a $12 million dollar check he’d written to the University. On the speaker’s platform, he’d have nowhere to hide, though, of course, he’d be surrounded by administrators and faculty members. A crowd composed of thousands of students, many of them in debt, along with their families, also in debt, would observe every move that he’d make.

The week of graduation, the student newspaper, The Star, primed readers for the protest with a banner headline that echoed the slogan coined by campus activists: “Day of Shame on Sonoma State University.” Just days before graduation, employees loyal to the university were observed gathering copies of the newspaper. They claimed to be “cleaning the campus.”

The protest quickly expanded into a First Amendment issue. SSU seemed on the verge of an explosion. The organizers wouldn’t have to do much at all, except sit back and watch the University self-destruct.

Then, reality kicked in. Graduating seniors insisted that commencement wasn’t a “day of shame” for them but rather a “day of pride.” Sandy Weill didn’t spark their ire. The university harnessed its public relations team and pointed out that Mr. and Mrs. Weill were generous philanthropists who gave millions of dollars to the arts and who earned their honorary degrees.

Then, too, the faculty divided among predictable lines, with old school radicals forming a small, core group and the majority of professors opting to remain seated while others stood and turned their backs to the podium.

Temperatures soared on the Saturday afternoon in May scheduled for commencement. Protesters distributed thousands of leaflets, and campus police, expecting the worst, were out in force. I was on hand to observe the drama. A professor emeritus at Sonoma State, where I taught for 30 years, I sat with the students, and stood out in the black cap-and-gown crowd because I wore a red shirt and a black baseball hat.

Four different police officers on four separate occasions approached me and asked for identification, though I didn’t have to produce papers. “He’s our professor,” students shouted. “He’s okay.”

When the critical moment arrived, Ruben Arminana, the president of the University, awarded the Weills their degrees. Half-a-dozen or so faculty members turned their backs on the podium and about 50 or so students did the same. Sandy Weill smiled, thanked the University, kissed his wife and sat down. 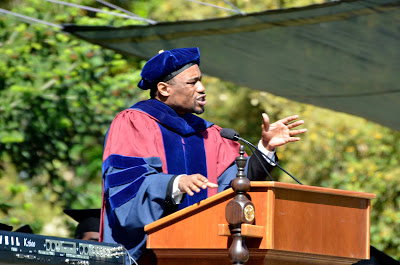 Marc Lamont Hill gives the commencement speech as Sonoma State. Inset below: Sandy Weill, Joan Weill and SSU President Arminana at commencement exercises. Photos by Sandy Destiny / The Rag Blog.
Everyone in the crowd seemed relieved that no one had shouted, thrown a pie in Weill’s face, or staged a sit-in on stage. Surprisingly, the best was yet to come. Marc Lamont Hill, the commencement speaker, took the podium and delivered an oration that in 1968 would have been described as “militant.”

By the standards of 2012, even by those of Occupy Wall Street protesters, it was as Maoist a talk as any heard on the campus. An African-American professor at Columbia University, and a regular commentator on CNN and MSNBC, Hill denounced Wall Street greed, the war in Afghanistan, and social injustice. With a big booming, impassioned voice, he invited graduating seniors not to conform, not to accept the big lies of the society, but rather to be brave and to oppose the political and economic system.

Students and faculty members stood and applauded him at the end of his speech. From where I sat and from what I saw and heard, Hill’s oration was the highlight of the day.

That evening at a party for faculty I talked to professors who had not taken part in the protest. “Every day is a day of shame in our capitalist society,” one woman told me. “Today was no different.” Another told me, “All universities give out honorary degrees to millionaires and billionaires these days.”

David Walls, a former dean at SSU, a veteran of the Free Speech movement at Berkeley in the 1960s, and an organizer with MoveOn.org, stayed away from the event. He said he was out-of-town. “Most of the commentary on Weill had little humor,” he told me. “The protest was mostly a venting of outrage, with no achievable goal in view. I imagine the issue of the honorary degree will disappear as quickly as it arose. Questions around campus finances will probably remain, but it is difficult to imagine that they will preoccupy Occupy.”

Shepherd Bliss, a former U.S. soldier who demonstrated against the war in Vietnam, was ecstatic about the protest against Weill. “We were highly successful for many reasons,” he explained. “We distributed thousands of flyers documenting Weill’s crimes. We mobilized students, faculty, alumna, and community members in a direct action against his criminal behavior.”

The role I chose for myself was to moderate the rhetoric of the radicals. One friend sent a letter to the local weekly in which he expressed his “extremely negative feelings toward robber baron Sandy Weill who never should have had his $12 million in green washing money accepted by Sonoma State University or anybody in this county.”

He went on to say, “If the powers-that-be were not above such temptation, they first should have exposed each county citizen to the fetid corpse and stench of the murder he perpetrated on Wall Street and our nation. As to Sonoma State University, ‘Shame, Shame, Shame'”

Phrases like “fetid corpse and stench of murder” didn’t help the cause. Shaming didn’t help, either. I also discovered that the simple act of wearing a red shirt in a crowd in which everyone else was wearing black made a strong statement and engendered discussion. Sometimes simple understatement works better than bravado.

I asked SSU’s president, Ruben Arminana, to answer a single multi-choice question. Do you feel, I asked, if you:
a. came out smelling like roses
b. dodged a bullet
c. made the best of a bad situation
d. all the above?
His answer was: “d. — all the above.”

As for the protests at SSU, I’d assign them a C. Marc Lamont Hill deserves an A+.

[Jonah Raskin is the author of For the Hell of It: The Life and Times of Abbie Hoffman. A former Yippie, he is a a regular contributor to The Rag Blog. Read more articles by Jonah Raskin on The Rag Blog.]