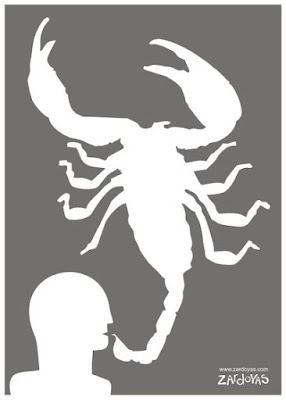 Cartoon by Ramiro Zardoya / Cartoon Movement.
And it’s not written in stone:
The First Amendment sucks

Once upon a time, I never would have said this. But I am saying it now: we have to watch what we say if we are to live at peace with one another.

In the wake of the murders of four Americans in Libya, including U.S. Ambassador J. Christopher Stevens, media pundits have come back again and again to the First Amendment as though it was sacrosanct and inviolable, and as though the First Amendment protects the rights of Americans to say anything they want to say about the prophet Mohammed.

In point of fact, the First Amendment never was, isn’t now, and never will be sacrosanct and inviolable. There has never been absolute freedom of speech and the press in the United States, though some, like Chief Justice William O. Douglas, insisted on it from the sanctity of the Supreme Court.

But did anyone ever stand up before the nine judges, point a finger at Douglas or any of his fellow jurists, and call him a “pimp for the American plutocracy” and a “dirty old man.” I don’t think so. I think he would have bounced them right out of the courtroom.

The founding fathers who drafted the First Amendment, which says that Congress can’t abridge freedom of speech, freedom of the press, and the right to gather peacefully and demand change, never intended those freedoms to be enjoyed by everyone. To a man, the founding fathers were white and wealthy and didn’t want African Americans, women, or white men without property to enjoy the same rights that they enjoyed.

They were hypocrites, dear old Tom Jefferson, James Madison, and President John Adams who jailed newspaper editors who criticized him. Jefferson went after journalists, too, once he got into power. It’s all there in the history books — some of them anyway, the ones that haven’t whitewashed our past.

For more than 100 years, Americans who were against chattel slavery, who denounced the subordination of women, and who condemned the system of wage slavery, were blatantly silenced, censored, arrested, jailed, deported, ostracized, and punished every which way.

All through the nineteenth and for much of the twentieth century, Americans took their lives in their hands when they spoke freely. If they were socialists, communists, or civil rights activists, they were spat-on, clubbed, bloodied, bombed, shot, even killed.

Beginning around the time of World War II, it was widely recognized that an individual couldn’t sue and collect damages if he got in the face of someone else and called him or her a fascist, or a mother——, and was punched. The legal concept came to be known as “Fighting Words” and for decades “Fighting Words” were not protected speech.

All of which brings me to words and images that express contempt for the culture, the religion, and the ethnicity of human beings. They are not protected speech, either. They are words that are tantamount to a physical attack.

For decades, too, we’ve had something called “Hate Speech” in the United States and that’s not protected, either. Call a Chinese woman, or a Congolese man a racial epithet and then beat him or her to a pulp and you’ll be charged not only with assault but with “Hate Speech” and find yourself in prison for a long time.

For too long, members of the dominant culture in the United States felt that they could call members of so-called minority groups whatever names they wanted to call them, such as n—–, as a way to keep them down, keep them in place, and give themselves a sense of superiority, however superficial.

Not surprisingly, members of those minority groups, whether they were Irish or Jews, African Americans or Japanese, didn’t like being called those derogatory names, because names hurt. They hurt more than sticks and stones.

Images hurt just as much if not more than names, and in today’s global world what we say and how we express ourselves travels as quickly as a guided missile all around the world. Images that originate in America have sped thousands of miles and have outraged people in Turkey, Iran, Iraq, Afghanistan, and elsewhere.

This has been going on for decades now. To a large extent the mass media has demonized Moslems, Arabs, and whole populations that live in the Middle East. Is that accidental? It’s probably not.

The First Amendment, as I see it, ought to protect citizens against government censorship. I’m against censorship of all kinds including self-censorship, which is especially pernicious because citizens silence themselves. The state doesn’t have to do it to them.

But our words and our images have real consequences.

Once upon a time, I never would have said this. But I am saying it now: we have to watch what we say if we are to live at peace with one another and not incite violent attacks. Everyone deserves the right not to be assaulted by demeaning words and images and if that means that the First Amendment — which has often been a fake anyway — takes a back seat, so be it.

I used to teach a law class at Sonoma State University and one of the things I would say is that whether to speak or not, and what to say, is something that has to be decided and chosen almost day by day. One day, silence might be appropriate, the next day shouting, the day after that guerilla theater.

After more than 200 years of First Amendment history it’s definitely a thorny issue. It’s not static and never has been. It has evolved, changed directions, come to mean different things to different people. The answer to dangerous speech is not to blot it out, but to have more speech and to thoroughly discuss the issues.

That’s difficult in the United States today because on the major television networks and on a lot of cable stations the dialogue is very limited and very safe and rarely wide open, robust, and uninhibited. It looks to me like there are a lot of stations owned by a few major corporations and the stations don’t criticize or look critically at the American political and economic system.

Does any major station really come out and tell the truth about the war on terrorism, or the banks, or the lies of the major parties and their financial donors? I don’t think so. We have a society that gives lip service to the First Amendment and at the same time engages in First Amendment activities in superficial ways.

Yes, the First Amendment is already more than 200 years old, but it’s still in its infancy, learning to walk, and yes, learning to talk. It might help if we don’t think of it as something that’s written in stone, but rather something that needs to be reconsidered and perhaps rewritten.

Americans need to learn about the media, the laws, and the ethics in much the same way that they are learning about fat and sugar and diet and health. If we don’t allow bodies to be poisoned with chemicals, why should we allow minds to be poisoned by toxic messages?