JONAH RASKIN :
BOOKS | Hilton Obenzinger bears witness to the times that have tried our souls 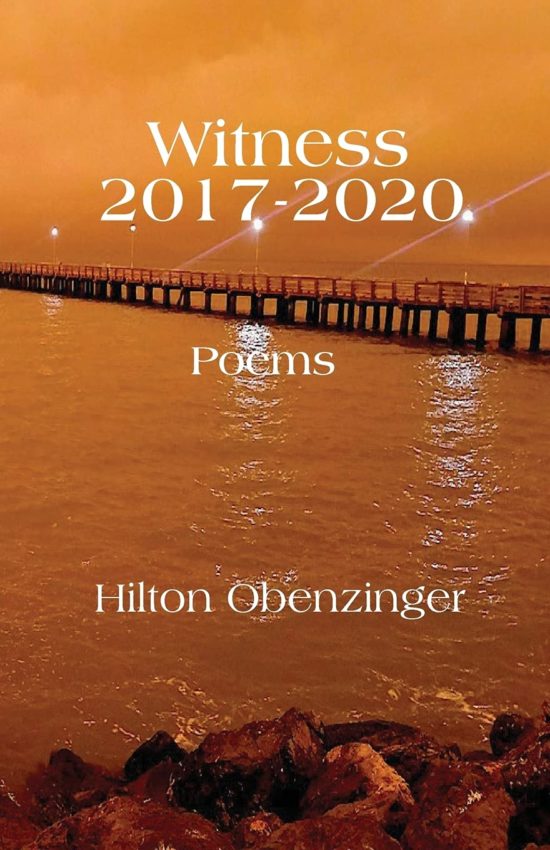 Ezra Pound, the twentieth-century American poet, once said, “Make it new,” and “Literature is news that stays news.” He would probably read Hilton Obenzinger’s new book of poems, Witness 2017-2020 (Irene Weinberger Books; $16.95), and observe that they are timely and topical and that they also go beyond the present historical moment and aim for something called universal.

As the title suggests, Obenzinger’s poems derive from his own observations and lived experiences in the four years from 2017 to 2020, when Donald Trump cracked a whip and when many, though not all Americans, jumped.

Obenzinger didn’t jump, but he heard the crack of the whip, and in “Fear Itself,” which is dated April 28, 2020, he writes “I’m afraid of Trump.” With good reason.

As Margaret Randall observes, ‘These poems
tell it like it is.’

Witness is the fifteenth book that Obenzinger has written and published over the past several decades. I don’t know if it is his best book. I haven’t studied all of his work, but it is certainly among his best, and well worth reading. As Margaret Randall observes, “These poems tell it like it is.”

Unlike Pound and his contemporary T. S. Eliot, Obenzinger never became an expat. Like William Carlos Williams, the New Jersey-born poet and doctor, he explores and maps his own native land, at the same time that he tackles the global, as in the poems, “Inscribe the Planet,” and “The Planet on September 26, 2084,” both from September 2019.

Obenzinger is well suited to bear witness to the ordinary and the epical, the quotidian and the cosmic. Born in Brooklyn, New York, a member of Columbia SDS, he taught at the Yurok Reservation in California, belonged to Ink Works, a printing press collective in San Francisco, and served as the associate director of Stanford University’s Chinese Railroad workers in North America Project. He also taught writing, literature, and American studies at Stanford.

The Rag Blog published an interview with Obenzinger on March 7, 2013, in which he observed, “American Jews have been suckered into supporting Israel in uncritical ways. This has been changing, but not enough Jews are yelling and screaming to stop Israel’s colonial expansion.”

He has paid his dues, honed his craft,
sharpened his antaean.

Obenzinger has been around. He has paid his dues, honed his craft, sharpened his antaean, and found the precise words to describe the world he has observed and imagined, as in the playfully sacrilegious poem, “God Picks His Nose,” that bounces whimsically from UFOs to Vietnam and to Charlie Chaplin. He’s also whimsical in “The Grand Canyon of San Francisco,” in which he writes, “I had a dream I was walking through beautiful woods with Moses. Not Charlton Heston but more like the old graybeard Walt Whitman.”

Obenzinger channels Whitman, Allen Ginsberg, Lawrence Ferlinghetti, and Diane di Prima, the author Loba and Revolutionary Letters and probably the greatest of the twentieth-century women poets who belonged to the Beat Generation. This book is dedicated to her, and to Les Gottesman and Corky Lee.

The author also acknowledges Edith Piaf, Emily Dickinson, the infamous “rebel girl” Elizabeth Gurley Flynn, the stoned stars of Up In Smoke, Anne Frank, the Beatles, Muhammad Ali, Lenny Bruce, Bruce Lee, George Floyd, Ruth Bader Ginsberg, aka RBG, but oddly enough no one from the Sixties, except Alan Senauke, a friend and comrade from Columbia who is now a vice-abbot of the Berkeley Zen Center. A photo by Senauke graces the cover of this book.

Still, I think it’s fair to say that the poems in Witness were written by an American lefty with a keen consciousness born of the beauty and the strife of the Sixties.

Sometimes, Obenzinger is apocalyptic as in
‘Inscribe the Planet.’

Witness is divided into three main parts: “Facial Recognition,” “Corona Chronicles,” and “Testimony.” I especially like the energy in part one and part two. Part three feels less exuberant, as though the author has run out of the steam that fuels the first two parts. I also like Obenzinger’s poems in which the language takes me by surprise and isn’t predictable, as in “All Regrets,” where he writes “Life on earth has its wonders/ Flowers and doughnuts.”

I don’t normally link flowers and doughnuts. The combination of the two makes me think, whereas some of the lines seems flat as in “The Planet on September 26, 2084,” in which he writes, “Las Vegas is nonstop hot blowtorch/ And all bets are off/ Phoenix is nowhere/ The bird has yet to rise from the ashes.”

Still, Obenzinger is wise enough not to get too obscure and lose readers.

In part two he chronicles the pandemic.

In part two, which contains work from March 13, 2020, to October 31, 2020, he chronicles the pandemic: social distancing, sheltering in place, flattening the curve and many of Trump’s shenanigans.

Readers of The Rag Blog will not have exactly the same memories of the pandemic as Obenzinger, but his memories will likely jog your memories and invite you to remember your journey through the year Obenzinger calls “miserable,” and that reminds him of the plague in the Old Testament, Pharaoh and the Exodus of the Jews.

The poems in Witness call for reader participation. In stunning ways, they offer a surrealist take on the news, and invite readers to make some news of their own.

They’re also a kind of incantation meant to exorcise the unholy ghost of Donald Trump, whose name appears more than a dozen times in these pages — more than one might want— and to usher in a new era where all lives matter, where we all age with dignity and we all go into the future, no matter what it might bring.

One doesn’t expect any the less from veterans of the Sixties who have gone on dreaming the dream and who have gone into the streets over and over again over the past five-decades.