Legal action comes with increased scrutiny from the federal government over the conduct of the New Orleans Police Department.

NEW ORLEANS — Eve is a transgender woman living in rural southern Louisiana. She was molested as a child and left home as a teenager. Homeless and alone, she was forced to trade sex for survival. While still a teenager, she was arrested and charged with a Crime Against Nature, an archaic Louisiana law originally designed to penalize sex acts associated with gays and lesbians.

Now Eve is one of nine plaintiffs fighting the law in a federal civil rights complaint that advocates hope will finally put this official discrimination to an end.

This legal action comes in the context of increased scrutiny from the federal government over the conduct of the New Orleans Police Department. A U.S. Justice Department investigation of the NOPD, released last week, found “reasonable cause to believe that patterns and practices of unconstitutional conduct and/or violations of federal law occurred in several areas,” including “racial and ethnic profiling and lesbian, gay, bi-sexual, and transgender (LGBT) discrimination.”

The report specifically mentioned Louisiana’s Crime Against Nature law, calling it “a statute whose history reflects anti-LGBT sentiment.” The report also concluded that investigators “found reasonable cause to believe that NOPD practices lead to discriminatory treatment of LGBT individuals.”

Eve, who asked that her real name and age remain confidential, spent two years in prison. During her time behind bars she was raped and contracted HIV. Upon release, she was forced to register in the state’s sex offender database. The words “sex offender” now appear on her driver’s license.

“I have tried desperately to change my life,” she says, but her status on the database stands in the way of housing and other programs. “When I present my ID for anything,” she says, “the assumption is that you’re a child molester or a rapist. The discrimination is just ongoing and ongoing.”

Eve was penalized under Louisiana’s 205-year-old Crime Against Nature statute, a blatantly discriminatory law that legislators have maneuvered to keep on the state’s books for the purpose of turning sex workers into felons.

In 2003, the Supreme Court outlawed sodomy laws with its decision in Lawrence v. Texas. That ruling should have invalidated Louisiana’s law entirely. Instead, the state has chosen to only enforce the portion of the law that concerns “solicitation” of a crime against nature. The decision on whether to charge accused sex workers with a felony instead of Louisiana’s misdemeanor prostitution law is left entirely in the hands of police and prosecutors.

A media-fueled national panic about child molesters has brought sex offender registries to every state. But advocates warn that, across the U.S., these registries have been used disproportionately against African Americans and other communities of color, and are often used for purposes outside of their original intent.

Louisiana, however, is the only state in the U.S. that requires people who have been convicted of crimes that do not involve minors or sexual violence to register as sex offenders.

In 1994, Congress passed Megan’s Law, also known as the Wetterling Act, which mandated that states create systems for registering sex offenders. The act was amended in 1996 to require public disclosure of the names on the registries and again in 2006 to require that sex offenders stay in the public registry for at least 15 years.

Megan’s Law was clearly not targeted at prostitution. However, Louisiana lawmakers opted to apply the registry to the crimes against nature statute as well, and at that moment started down the path to a new level of punishment for sex work. “This archaic law is being used to mark people with a modern day scarlet letter,” says attorney Alexis Agathocleus of the Center for Constitutional Rights, another party to the lawsuit.

People convicted under the Louisiana law must carry a state ID with the words “sex offender” printed below their name. If they have to evacuate because of a hurricane, they must stay in a special shelter for sex offenders that has no separate facilities for men and women.

They have to pay a $60 annual registration fee, in addition to $250 to $750 to print and mail postcards to their neighbors every time they move. The postcards must show their names and addresses, and often they are required to include a photo. Failing to register and pay the fees, a separate crime, can carry penalties of up to 10 years in prison.

Women and men on the registry will also find their names, addresses, and convictions printed in the newspaper and published in an online sex offender database. The same information is also displayed at public sites like schools and community centers. Women — including one mother of three — have complained that because of their appearance on the registry, they have had men come to their homes demanding sex. A plaintiff in the suit had rocks thrown at her by neighbors. “This has forced me to live in poverty, be on food stamps and welfare,” explains a man who was on the list. “I’ve never done that before.”

Seventy-five percent of those on the database for Crime Against Nature are women, and 80 percent are African American. Evidence gathered by advocates suggests a majority are poor or indigent.

Legal advocates credit on-the-ground organizing and the advocacy of the group Women With A Vision (WWAV) for making them aware of this discriminatory law. WWAV, a 20-year-old New Orleans-based organization, provides health care and other services to women involved in survival sex work.

“Many of these women are survivors of rape and domestic violence themselves,” says WWAV executive director Deon Haywood. “Yet they are being treated as predators.” 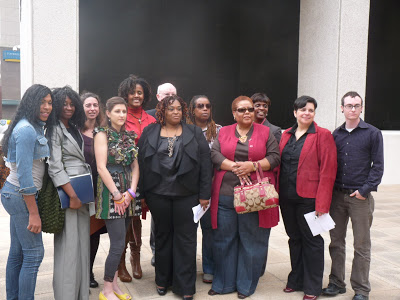 Ian, another plaintiff in the legal challenge to the Crime Against Nature statute, was homeless from the age of 13, and began trading sex for survival. When an undercover officer approached him and asked him for sex, Ian asked for money. “All I said was $50,” he says, “And they put me away for four years.”

In prison, Ian was raped by a correction officer and by other prisoners, and like Eve, he contracted HIV. Now, he says, potential employers see the words “sex offender” written on his ID and no one will hire him. “Do I deserve to be punished any more than I’ve already been punished?” he asks. “I was 13 years old. That’s the only way I knew how to survive.”

Hiroke, a New Orleans resident and another plaintiff in the suit, spoke on a call set up by advocates. “I had just graduated from high school and was just coming out as transgender,” she says. Hiroke was arrested and convicted while still a teenager.

As she began to describe her experience, Hiroke’s voice began to shake. “I was being held with men in jail at the time…” she began. Then there was silence on the line. Holding back tears, she then apologized for being unable to continue.

The Louisiana legislature recently passed a reform of the Crime Against Nature statute, but for the vast majority of those affected, the change makes little to no difference. Although the new law takes away the registration component for a first conviction, a second conviction requires 15 years on the registry, and up to five years imprisonment. A third conviction mandates a lifetime on the registry.

The legal challenge to the Crime Against Nature law, called Doe v. Jindal, has been filed in Louisiana’s U.S. District Court Eastern District on behalf of nine anonymous plaintiffs. It was filed by the Center for Constitutional Rights, attorney Andrea J. Ritchie, and the Law Clinic at Loyola University New Orleans College of Law.

The anonymous plaintiffs include a grandmother, a mother of four, three transgender women, and a man, all of whom have been required to register as sex offenders from 15 years to life as a result of their convictions for the solicitation of oral sex for money.

[Jordan Flaherty is a journalist and staffer with the Louisiana Justice Institute. His award-winning reporting from the Gulf Coast has been featured in a range of outlets including The New York Times, Mother Jones, and Argentina’s Clarin newspaper. His new book is FLOODLINES: Community and Resistance from Katrina to the Jena Six. He can be reached at neworleans@leftturn.org, and more information about Floodlines can be found at floodlines.org. This article was also posted at The Louisiana Justice Institute version of this article originally appeared at ColorLines.com.]