Harvey Wasserman : End Nuclear Power Before It Ends Us 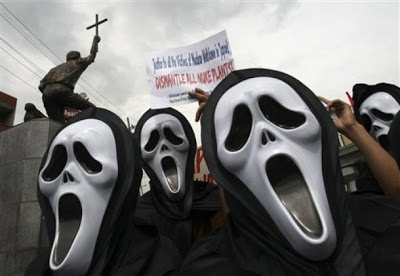 Environmental activists, wearing ghost masks to symbolize victims of a nuclear meltdown, demonstrate near the Presidential Palace in Manila, Philippines, Tuesday March 15, 2011. Photo from AP.
End nuclear power before it ends us

For 25 years the nuclear industry has told us Chernobyl wasn’t relevant because it was Soviet technology. Such an accident ‘could not happen here.’

The Japanese people are now paying a horrific price for the impossible dream of the “Peaceful Atom.” For a half-century they have been told that what’s happening now at Fukushima would never occur.

Our hearts and souls must first and foremost go out to them. As fellow humans, we must do everything in our power to ease their wounds, their terrible losses and their unimaginable grief.

We are also obliged — for all our sakes — to make sure this never happens again.

In 1980, I reported from central Pennsylvania on what happened to people there after the accident at Three Mile Island a year before.

I interviewed scores of conservative middle Americans who were suffering and dying from a wide range of radiation-related diseases. Lives and families were destroyed in an awful plague of unimaginable cruelty. The phrase “no one died at Three Mile Island” is one of the worst lies human beings have ever told.

In 1996, 10 years after Chernobyl, I attended a conference in Kiev commemorating the tenth anniversary of that disaster. Now, another 15 years later, a definitive study has been published indicating a death toll as high as 985,000… so far.

Today we are in the midst of a disaster with no end in sight. At least four reactors are on fire. The utility has pulled all workers from the site, but may now be sending some back in.

The workers who do this are incomparably brave. They remind us, tragically, of some 800,000 Chernobyl “Liquidators.” These were Soviet draftees who were sent into that seething ruin for 60 or 90 seconds each to quickly perform some menial task and then run out.

When I first read that number — 800,000 — I thought it was a typographical error. But after attending that 1996 conference in Kiev, I spoke in the Russian city of Kaliningrad and met with dozens of these Chernobyl veterans. They tearfully assured me it was accurate. They were angry beyond all measure. They had been promised they would not encounter health problems. But now they were dying in droves.

How many will die at Fukushima we will never know. Never have we faced the prospect of multiple meltdowns, four or more, each with its own potential for gargantuan emissions beyond measure.

If this were happening at just one reactor, it would be cause for worldwide alarm.

One of the units has been powered by Mixed Oxide Fuel. This MOX brew has been heralded as a “swords into ploughshares” breakthrough. It took radioactive materials from old nuclear bombs and turned them into “peaceful” fuel.

It seemed like a neat idea. The benefits to the industry’s image were obvious. But they were warned repeatedly that this would introduce plutonium into the burn chain, with a wide range of serious repercussions.

Among them was the fact that an accident would spew the deadliest substance ever known into the atmosphere. If breathed in, the tiniest unseen, untasted particle of plutonium can cause a lethal case of lung cancer.

But like so many other warnings, the industry ignored its grassroots critics. Now we all pay the price.

For 25 years the nuclear industry has told us Chernobyl wasn’t relevant because it was Soviet technology. Such an accident “could not happen here.”

But today it’s the Japanese. If anything, they are better at operating nuclear reactors than the Americans. Japanese companies own the Westinghouse nuclear division, whose basic design is in place throughout France. Japanese companies also own the GE nuclear division. Among others, 23 of their U.S. reactors are extremely close or virtually identical in design to Fukushima I, now on fire.

Jeffrey Immelt, head of GE, is one of the many heavy corporate hitters now advising Barack Obama. Obama says (so far) that he has no intention of changing course in nuclear policy. That apparently includes a $36 billion new reactor loan guarantee giveaway in the 2012 budget. Energy Secretary Steven Chu has made clear he considers the situation at U.S. reactors very different from those in Japan. Essentially, he says, “it can’t happen here.”

Chu and others keep saying that our choice is between nukes and coal, that atomic energy somehow mitigates global warming. This is an important sticking point for millions of concerned citizens, and an important and righteous legion of great activists, who see climate chaos as the ultimate threat.

But especially in light of what’s happening now, it’s based on a non-choice. Nukes are slow to build, soaring in cost, and clearly have their own emissions, waste, and safety problems. The ancillary costs of coal and oil are soaring out of reach in terms of environmental, health, and other negative economic impacts. The “bridging fuel” of gas also faces ever-higher hurdles, especially when it comes to fracking and other unsustainable extraction technologies.

The real choice we face is between all fossil and nuclear fuels, which must be done away with, as opposed to a true green mix of clean alternatives. These safe, sustainable technologies now, in fact, occupy the mainstream.

By all serious calculation, solar is demonstrably cheaper, cleaner, quicker to build, and infinitely safer than nukes. Wind, tidal, ocean thermal, geothermal, wave, sustainable biofuels (NOT from corn or soy), increased efficiency, revived mass transit — all have their drawbacks here and there. But as a carefully engineered whole, they promise the balanced Solartopian supply we need to move into a future that can be both prosperous and appropriate to our survival on this planet.

As we see now all too clearly, atomic technology is at war with our Earth’s ecosystems. Its centralized, heavily capitalized corporate nature puts democracy itself on the brink. In the long run, it contradicts the human imperative to survive.

Today we have four reactors on the coast of California that could easily have been ripped apart by a 9.0 Richter earthquake. Had this last seismic hit been taken on this side of the Pacific, we would be watching nightly reports about the horrific death toll in San Luis Obispo and the catastrophic loss of the irreplaceable food supply from the Central Valley, and learned calculations about the forced evacuations of Los Angeles and San Diego.

There are nearly 450 atomic reactors worldwide. There are 104 here in the U.S.

Faced with enormous public demonstrations, the Prime Minister of Germany has ordered their older reactors shut. At the very least this administration should follow suit.

The Chinese and Indians, the biggest potential buyers of new reactors, are said to be “rethinking” their energy choices.

As a species, we are crying in agony, to the depths of our souls, from compassion and from fear.

But above all, the most devastating thing about the catastrophe at Fukushima is not what’s happening there now.

It’s that until all the world’s reactors are shut, even worse is virtually certain to happen again. All too soon.

[Harvey Wasserman edits the NukeFree.org website, and is author of Solartopia! Our Green-Powered Earth. This article was also posted to BuzzFlash at Truthout.]

9 Responses to Harvey Wasserman : End Nuclear Power Before It Ends Us