Jorge Rivas and Jamilah King : SOPA and the Internet Blackout 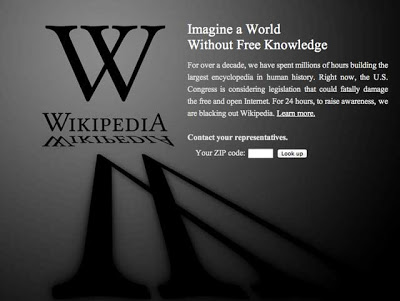 What is SOPA?
Here are five things you need to know

Wikipedia was among several websites to shut down Wednesday in protest of anti-piracy bills now in Congress that critics say could amount to censorship.

Instead of the usual encyclopedia articles, visitors to Wikipedia’s English-language site were greeted by a message about the decision to black out its Web page for an entire day.

“Imagine a World Without Free Knowledge,” said the stark message in white letters on a black and gray background.

“For over a decade, we have spent millions of hours building the largest encyclopedia in human history. Right now, the U.S. Congress is considering legislation that could fatally damage the free and open Internet. For 24 hours, to raise awareness, we are blacking out Wikipedia.” — CNN

The Stop Online Piracy Act (SOPA) has the entire Internet up in arms today. Media justice advocates say the bill is anathema to basic functioning of the Internet; for a system that’s based on relative freedom and connectivity, SOPA would work as the online world’s stingy gatekeeper, giving government the power to shutdown websites altogether.

Today, hundreds of websites are joining in a day of action to SOPA’s threat to freedom of expression on the Internet. Several civil rights and racial justice organizations are joining in what’s been called an “Internet strike,” by closing their websites from 8 a.m. to 8 p.m. eastern time. Colorlines.com’s Jamilah King, who covers media policy, explains why:

The Internet’s been an important space for communities of color to tell their own stories and advocate for issues they don’t often see in film or on television. SOPA puts that independence in jeopardy. It’ll add yet another barrier to how and what we can communicate.

So, here are the basics on what you need to know.

What’s the justification for SOPA? Supporters of the bill claim that it’ll help copyright holders (think big record labels) protect their content. Rep. Smith has criticized the bill’s opponents and explained that SOPA would only target foreign websites that put American businesses at risk.

But opponents argue that the definition of “foreign infringing sites” is too vague. As it’s written now, they argue, the bill will fundamentally alter the relative freedom with which the Internet currently operates. What’s certain is that it’ll add a level of supervision to the Internet that’s never existed before.

Who’s opposed to SOPA? Basically, every website that you visit regularly. Most notably, Wikipedia, Craigslist, and Reddit, along with at least 200 other websites, have chosen to go dark in opposition to the bill and to help educate users about its potential impact. But the list doesn’t stop there: Google [they’re putting a black bar across their logo today], Yahoo, YouTube, and Twitter have also publicly opposed the bill. The White House has also announced that, should the bill reach President Obama’s desk, he will veto it.

How would SOPA work? It allows the U.S. attorney general to seek a court order against the targeted offshore website that would, in turn, be served on Internet providers in an effort to make the target virtually disappear. It’s kind of an Internet death penalty.

More specifically, section 102 of SOPA says that, after being served with a removal order:

A service provider shall take technically feasible and reasonable measures designed to prevent access by its subscribers located within the United States to the foreign infringing site (or portion thereof) that is subject to the order… Such actions shall be taken as expeditiously as possible, but in any case within five days after being served with a copy of the order, or within such time as the court may order.

How would it impact me? If you create or consume content on the Internet, under SOPA the government would have the power to pull the plug on your website. If you’re a casual consumer, your favorite websites could be penalized and shut down if they seem to be illegally supporting copyrighted material.

This is especially important for human rights groups and advocates in communities of color, who could faced increased censorship if the bill is passed. The language of the bill makes it easy for the US Attorney General to go after websites it simply sees as a threat.

[Jorge Rivas is multimedia editor and pop culture blogger and Jamilah King is the news editor at Colorlines.com. This article was sourced from Colorlines and distributed by AlterNet.]

This entry was posted in RagBlog and tagged Freedom of Expression. Bookmark the permalink.

1 Response to Jorge Rivas and Jamilah King : SOPA and the Internet Blackout