JOURNALISM : Was I. F. Stone the World’s First Blogger? 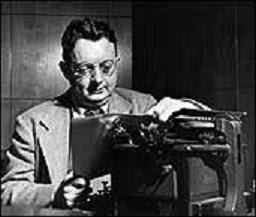 In the days before the Internet, one of the great voices of independent journalism was I.F. Stone, whose simple newsletter challenged the conventional thinking of the day. Media critic Jeff Cohen recalls Stone’s contributions to the cause of journalism.

It was nineteen years ago this week that I.F. (Izzy) Stone died. The legendary blogger was 81.
By Jeff Cohen

Confused? You say he died years before web blogs were invented?

Well, yeah, but when I think of today’s blunt, fact-based online hell-raisers, my mind quickly flashes on Izzy Stone. You may think of Josh Marshall or Glenn Greenwald or Arianna Huffington. I think of Izzy.

Before there was an Internet, Izzy Stone was doing the work we associate with today’s best bloggers.

Like them, he was obsessed with citing original documents and texts. But before search engines, Izzy had to consume ten newspapers per day – and physically visit government archives and press offices, and personally pore over thousands of words in the Congressional Record.

That’s how he repeatedly scooped the gullible, faux-objective MSM of his day in exposing government deceit, like that propelling the Vietnam War.

Izzy was the ultimate un-embedded reporter. His journalism was motivated by a simple maxim that resonates loudly in our era of Cheneys and Rumsfelds and WMD hoaxes: “All governments lie, but disaster lies in wait for countries whose officials smoke the same hashish they give out.”

Month after month from 1953 to 1969 I.F. Stone’s Weekly (biweekly through 1971) exposed deceptions as fast as governments could spin them. His timely and timeless dispatches are gathered in an exceptional paperback, The Best of I.F. Stone.

In real time in August 1964, Izzy was virtually alone in challenging the Gulf of Tonkin hoax, an imaginary “unprovoked attack” on U.S. warships used by the Johnson administration to send several hundred thousand American troops into Vietnam.

How did Izzy do it? By citing international law texts and finding nuggets of truth in the Congressional Record of the Senate debate (no C-SPAN then) and in contradictory reporting in mainstream publications.

Izzy’s expose began boldly: “The American government and the American press have kept the full truth about the Tonkin Bay incidents from the American public.” He fumed at the credulous MSM: “The process of brain-washing the public starts with off-the-record briefings for newspapermen.”

Only two senators, Oregon’s Wayne Morse and Alaska’s Ernest Gruening, had voted against the Tonkin Resolution; Izzy noted that the press had “dropped an Iron Curtain weeks ago on the antiwar speeches of Morse and Gruening.”

Like today’s online journalistic entrepreneurs, being his own editor and boss allowed Izzy the freedom and space to parse out the distortions of government in detail.

A year before the Tonkin hoax, he wrote: “In this age of corporation men, I am an independent capitalist, the owner of my own enterprise.” While most journalists “find their niche in some huge newspaper of magazine combine, I am a wholly independent newspaperman, standing alone.”

Bloggers battle today’s McCarthyites who smear Iraq War opponents as un-American abettors of our country’s enemies. Izzy battled the original Joe McCarthy, in issue after issue of his weekly.

Indeed, he launched his publication the same month – January 1953 – McCarthy became chair of the Senate Operations Committee, enhancing his powers of intimidation.

Izzy warned prophetically: “McCarthy is in a position to smear any government official who fails to do his bidding. With such daring and few scruples, McCarthy can make himself the most powerful single figure in Congress.”

Three months later, he wrote: “The most subversive force in America today is Joe McCarthy. No one is so effectively importing alien conceptions into American government. No one is doing so much to damage the country’s prestige abroad. . . .If ‘subversion’ is to be met by deportation, then it is time to deport McCarthy back to Wisconsin.”

Not until 11 months later did Edward R. Murrow air his first report on McCarthy.

Today, online media critics and bloggers expose the bigotry and fallacy gushing forth from Fox News and talk radio and the Rev. Moon-owned Washington Times, long-edited by Wes Pruden Jr. They blog about MSM being stenographers to rightwing extremists.

When racists in Little Rock were obstructing court-ordered school desegregation in 1958, Izzy was on the scene reporting: “A staff correspondent in Little Rock quoted the Reverend Wesley Pruden the segregationist leader, as saying, ‘The South will not accept this outrage, which a Communist-dominated government is trying to lay on us.’ This was my introduction to a regional journalism which prints such statements matter-of-factly.”

The Communist-dominated regime referred to by Pruden Sr. was headed by Eisenhower.

Izzy loved to tell the story of how he found – hiding in plain view in different editions of the New York Times – one-paragraph “shirrtail” wire stories indicating that our country’s first underground nuclear test in Nevada in 1957 was detected in Toronto, Rome and Tokyo.

Months later, just as hawks in Washington were preparing to attack a test ban treaty with the Soviets on the basis that nuclear tests could not be detected more than 200 miles away, Izzy found a seismologist in the Commerce Department who told him the test had also been detected as far away as Alaska and Arkansas.

Izzy’s reporting obstructed the government’s lie before it could get its shoes on.

Starting out in his teens, Izzy was a daily reporter, editor and columnist. After moving to D.C. in 1940 to become Washington editor of The Nation, he exposed U.S. corporations still doing business with Hitler’s Germany. He was one of the first to sound the alarm about the Nazi holocaust, referring in 1942 to “a murder of a people.”

An anti-racist, he battled the all-white National Press Club over exclusion of black journalists.

Izzy’s cantankerousness and “hound-dog tenacity” – in the words of his biographer– would make even the most stubborn blogger blush. Although he was a lifelong progressive, his journalistic hallmark was independence: “I felt that party affiliation was incompatible with independent journalism.”

His writings show deep admiration for Franklin Roosevelt, yet his article on FDR’s death criticized his “deplorable disrespect for the constitutional amenities” in resisting a reactionary Supreme Court that knocked down one New Deal bill after another.

He wrote books passionately supporting the birth of Israel, but strongly criticized it for mistreatment of Palestinians. He advocated peace and negotiations with the Soviet Union, while increasingly vocal in denouncing its rulers: “The worker [in Russia] is more exploited than in Western welfare states.”

He despised racists, but fought for their free speech rights, and everyone’s: “Once you put ifs and buts in the Bill of Rights, nobody’s civil liberties will be secure.”

That he marched to his own drummer can be seen in his dispatch from the 1963 March on Washington for civil rights, in which he criticized “respectables” for muting “Negro militancy” into support of JFK’s inadequate program, and referred to Martin Luther King as “a little too saccharine for my taste.”

Born of immigrant parents, Izzy was an American patriot who worshipped the Bill of Rights: “You may think I am a red Jew son-of-a-bitch, but I’m keeping Thomas Jefferson alive.”

And he worshipped our country’s tradition of press freedom: “There are few countries in which you can spit in the eye of the government and get away with it. It’s not possible in Moscow.”

But Izzy was never naïve about American traditions that threatened freedom, and he had a 5,000-page FBI spy file to prove it.

Today’s muckraking bloggers are often belittled for working from their homes, far removed from the corridors of power. Izzy worked out of his home. If he were alive, he’d be applauding the Josh Marshalls and other independents, urging: Keep your distance from power.

“I made no claim to inside stuff. . . I tried to dig the truth out of hearings, official transcripts and government documents, and to be as accurate as possible. . . I felt like a guerilla warrior, swooping down in surprise attack on a stuffy bureaucracy where it least expected independent inquiry.

“The reporter assigned to specific beats like the State Department or the Pentagon for a wire service or a big daily newspaper soon finds himself a captive. State and Pentagon have large press relations forces whose job it is to herd the press and shape the news. There are many ways to punish a reporter who gets out of line. . .

“But a reporter covering the whole capitol on his own – particularly if he is his own employer – is immune from these pressures.”

Imagine the obstacles Izzy faced – did I mention his impaired eyesight and hearing? – launching a weekly and finding an audience at the height of McCarthy’s witch hunts (even at $5 for an annual subscription).

Far fewer obstacles face today’s bloggers who seek to follow in Izzy’s footsteps – blessed as they are with relative freedom and this awesome research and outreach tool known as the Internet.

As these upstarts speak truth to power, I see Izzy Stone watching over them, from the heavens.

[Jeff Cohen is the director of the Park Center for Independent Media at Ithaca College. He first saw I.F. Stone’s Bi-Weekly at a D.C. peace march in 1969. Soon after Cohen launched the media watch group FAIR in 1986, Izzy Stone signed on to its first formal protest, a telegram to ABC News on the exclusion of progressive voices. This article was posted on July 16, 2008.]