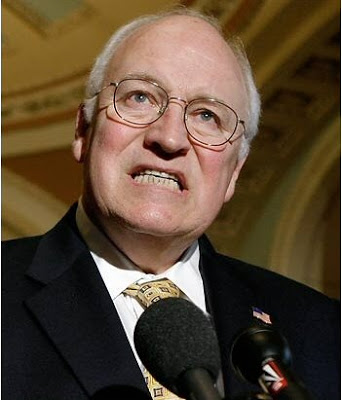 Photo: Mark Wilson/Getty Images.
Cheney Worries about Wasting the Sacrifices made in Iraq on behalf of Big Oil
By Juan Cole / July 2, 2009

Dick Cheney reacted to the cessation of unilateral US patrols of major cities in Iraq, saying that he had concerns that the “insurgents” might launch more attacks and that “I would not want to see the U.S. waste all the tremendous sacrifice that has gotten us to this point.”

First of all, Cheney didn’t make any sacrifices in Iraq. He deferred his own military service five times because he ‘had other things to do.’ The ‘sacrifices’ were caused because he purveyed falsehoods to the US public in order to get up that war, hinting around that Saddam was in bed with Usama Bin Laden and telling senators that Iraq was two years away from having a nuclear bomb. So the sacrifices were of other people’s children, and his role was merely that of an Aztec high priest cutting the heart out of the victims.

Second of all, from the dawn of time until 2003, there had never been a suicide bombing in Iraq. Iraqis are not essentially violent. Like all human beings, they deploy violence at some points to further political goals. Cheney launched a violent illegal war of aggression on Iraq. And Cheney created the “insurgency” by invidious policies that unfairly disadvantaged the Sunni Arabs in the new Iraq he helped midwife.

Third, Cheney’s own administration (it was Bush-Cheney, remember Dick?) that negotiated the Status of Forces agreement under which the cessation of stand-alone US patrols of major Iraqi cities was scheduled for this summer. Cheney is trying to imply that this policy is that of the Obama administration!

Fourth, Cheney kept talking about ‘liberating’ Iraq and democratizing the Middle East. The patrols are ceasing precisely because the elected Iraqi parliament insisted on it! Cheney only likes democracy when it functions as an elective dictatorship for him and his cronies.

Fifth, Jason Leopold reviews the documentary evidence that Dick Cheney combined his energy task force with planning for an overthrow of the Saddam Hussein regime in Iraq.

[An] April 2001 report, “Strategic Policy Challenges for the 21st Century,” was prepared by the James A. Baker Institute for Public Policy and the U.S. Council on Foreign Relations at the request of then-Vice President Dick Cheney. In retrospect, it appears that the report helped focus administration thinking on why it made geopolitical sense to oust Hussein, whose country sat on the world’s second largest oil reserves.

“Iraq remains a de-stabilizing influence to the flow of oil to international markets from the Middle East,” the report said.

“Saddam Hussein has also demonstrated a willingness to threaten to use the oil weapon and to use his own export program to manipulate oil markets . . . The advisory committee that helped prepare the report included Luis Giusti, a Shell Corp. non-executive director; John Manzoni, regional president of British Petroleum; and David O’Reilly, chief executive of ChevronTexaco. . . [the notorious crook] Ken Lay, then chairman of the energy-trading Enron Corp., also made recommendations that were included in the Baker report.

And then Leopold adds is this:

The New Yorker ‘s Jane Mayer later made another discovery: a secret NSC document dated Feb. 3, 2001 – only two weeks after Bush took office – instructing NSC officials to cooperate with Cheney’s task force, which was “melding” two previously unrelated areas of policy: “the review of operational policies towards rogue states” and “actions regarding the capture of new and existing oil and gas fields.” [The New Yorker, Feb. 16, 2004]

By March 2001, Cheney’s task force had prepared a set of documents with a map of Iraqi oilfields, pipelines, refineries and terminals, as well as two charts detailing Iraqi oil and gas projects, and a list titled “Foreign Suitors for Iraqi Oilfield Contracts,” according to information released in July 2003 under a Freedom of Information Act lawsuit filed by the conservative watchdog group, Judicial Watch.

In other words, what Cheney is really worried about is that a US military withdrawal from Iraq on the timetable his administration negotiated with the Iraqi parliament might lead to further instability of a sort that would keep the US oil majors from getting at Iraqi petroleum in a big way. His invocation of the ‘sacrifices’ made by other people’s children on the basis of his hateful manipulations is the ultimate desecration.

For my own account of Cheney, Iraq and Big Oil, see Engaging the Muslim World.