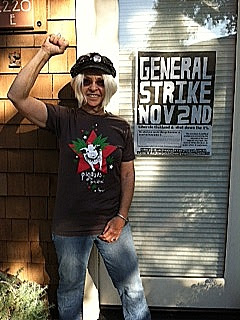 OAKLAND — I felt very much at home at Occupy Oakland’s General Strike yesterday after I heard a young rapper with butt-length dreds and saggy blue jeans remind the crowd that Oakland was the birthplace of the Black Panther Party. He pumped his fist in the air and yelled “Power to the People,” then, just like the Panthers did, admonished the cheering crowd to “watch out for provocateurs.”

I recognized a younger me in a group of women in red t-shirts who taught the crowd to stretch our arms in front of our bodies in a self-defense stance of “No!” Just as Wolfe Lowenthal taught karate in Lincoln Park that summer of 1968. Like Wolfe, the stance these women took was militant and gentle, unlike Wolfe, they complemented “No” with a new stance: “Yes!”

I saw Weathermen in the Black Bloc anarchists who broke away and trashed, and Summer of Love hippies in the beatitude of those who sat on straw mats meditating or practicing yoga. I smelled the ‘60s in the marijuana offered to me by a smiley young African-American teen who sat behind me.

Abbie Hoffman would have been delighted at the General Strike’s free store vibe where food, posters, clothes, and supplies were freely given with the attitude that everyone can share; we’re all in this together. To me, a 1960s radical and original Yippie, the slogan: “Occupy” is brilliant. It prompts you to take direct action, unlike asking those in power to “Stop the War.” 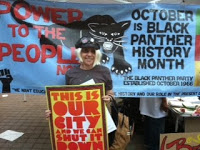 The male-dominated, media-seeking leadership of my day has been replaced by a gender neutral, democratic process of consensus that does not defer to celebrity. I’m delighted. Anyone can choose — or choose not — to speak to the crowd. Or to the media.

When someone speaks for attribution, they open with the caveat: I speak for myself, not for Occupy. Even Jean Quan, Mayor of Oakland, was not accorded the privilege of speaking — she arrived after the speaker’s list was full.

I wrote my Ph.D. thesis in the 1970s and came up with what I thought was a new concept. I got it from the Vietnamese. The best English translation was: “fecundated in a new context.” The verb may sound obscene, but fecundate translates as nourish or fertilize.

It’s been my experience that history is not a straight line. My generation of radicals should not and must not take credit for Occupy. What we did is plant seeds which have been fertilized and nourished by the massive social inequities of today. I felt those seeds flower at Occupy Oakland’s General Strike.

[Judy Gumbo Albert is an original Yippie, along with Abbie and Anita Hoffman, Jerry Rubin and Nancy Kurshan, Paul Krassner, and Judy’s late husband Stew Albert. Judy has remarried, lives in Berkeley, California, and is currently writing her memoir, Yippie Girl. She can be found at www.yippiegirl.com. Read more articles by Judy Gumbo Albert on The Rag Blog.]