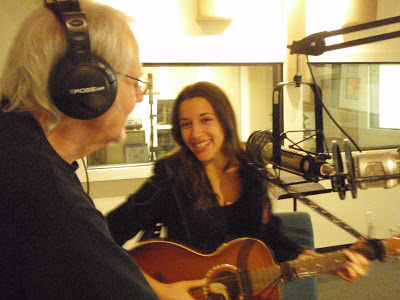 Charlie Faye also has become one of Austin’s most recognized music community organizers. A front-page story in the Austin American-Statesman outlined her efforts to save Wilson Street, a musicians’ enclave of cottages in South Austin. Charlie discusses with us the sense of community among musicians in Austin (a major factor in her decision to move to Austin in 2007), the importance of affordable housing for the Austin artistic community, and the unique role that the Wilson Street cottages have played.

(After the show was broadcast, Charlie forwarded to us, via Facebook, a 30-day “Notice of Lease Termination and Notice to Vacate” the properties at 2606 and 2610 Wilson Street; the lots are scheduled for redevelopment.)

Charlie’s history also includes touring as a sideman with Dan Zanes and Greg Garing, as well as playing alongside Natalie Merchant, Bettysoo, Will Sexton, and many others. On the show, we discuss her accomplishments and her adventures, and she performs live.

Rag Radio — hosted and produced by Rag Blog editor Thorne Dreyer — is broadcast every Friday from 2-3 p.m. (CDT) on KOOP 91.7-FM in Austin, and streamed live on the web. KOOP is an all-volunteer cooperatively-run community radio station in Austin, Texas.