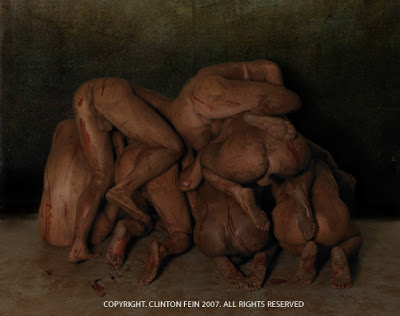 Clinton Fein’s latest exhibition, Torture, which opened at Toomey Tourell Gallery in San Francisco in January 2007 is a shocking and defiant exploration of America’s approach to torture under the Bush administration. A series of staged and digitally manipulated photographic images recreate the infamous torture scenes from Abu Ghraib prison in Iraq, transforming the diffuse, muted and low-resolution images into large-scale, vivid, powerful and frightening reproductions. Photo: ClintonFein.com.
How Many Americans Died Because of Bush’s Torture Program?
By Scott Horton / December 2, 2008

According to a special operations intelligence officer, the answer is a number north of three thousand–not counting the tens of thousands maimed or seriously wounded, the destruction of the nation’s reputation as a moral leader, or the damage done to our Constitution. In a stunning op-ed published in Sunday’s Washington Post, a special operations intelligence officer details his direct experience with torture practices put into effect in Iraq in 2006 — long after the Pentagon had forsworn them, but while Donald Rumsfeld was still running the shop.

Amid the chaos, four other Air Force criminal investigators and I joined an elite team of interrogators attempting to locate Zarqawi. What I soon discovered about our methods astonished me. The Army was still conducting interrogations according to the Guantanamo Bay model: Interrogators were nominally using the methods outlined in the U.S. Army Field Manual, the interrogators’ bible, but they were pushing in every way possible to bend the rules — and often break them. I don’t have to belabor the point; dozens of newspaper articles and books have been written about the misconduct that resulted. These interrogations were based on fear and control; they often resulted in torture and abuse.

The Pentagon’s claims that it had returned to interrogations based on the venerable Field Manual, was, it seems, conscious disinformation. But the officer offers an assessment. The torture techniques consistently failed to produce actionable intelligence, he said. But the old techniques — which rest on confidence building — consistently worked and gave the interrogators access to information that saved lives. Moreover, the strategies employed to effect later were used as a much broader tactic, accentuating differences between native Iraqi Sunnis and foreign fighters, in what came to be known as the “Sunni Awakening.”

But then we come to the most chilling part of the op-ed, which the writer discloses the Bush Administration struggled to suppress:

I learned in Iraq that the No. 1 reason foreign fighters flocked there to fight were the abuses carried out at Abu Ghraib and Guantanamo. Our policy of torture was directly and swiftly recruiting fighters for Al Qaeda in Iraq. The large majority of suicide bombings in Iraq are still carried out by these foreigners. They are also involved in most of the attacks on U.S. and coalition forces in Iraq. It’s no exaggeration to say that at least half of our losses and casualties in that country have come at the hands of foreigners who joined the fray because of our program of detainee abuse. The number of U.S. soldiers who have died because of our torture policy will never be definitively known, but it is fair to say that it is close to the number of lives lost on Sept. 11, 2001. How anyone can say that torture keeps Americans safe is beyond me–unless you don’t count American soldiers as Americans.

The torture techniques developed by the Bush torture team were the most effective recruitment tool we could ever have given terrorists. They cost thousands of American lives. And that’s a key element of the legacy of the forty-third president.

This entry was posted in RagBlog and tagged Criminal Justice, Torture, U.S. Military, War on Terror. Bookmark the permalink.