That is, Rove seems to think that preemptive war defines Bush’s legacy and that future Presidents will embrace it. How sick they all are. And here is a gentle reminder of just what we mean: 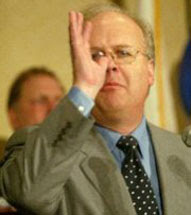 LITTLE ROCK, Ark., March 8 — In an interview this week in his windowless West Wing office, Karl Rove said that there is “very little” discussion about President Bush’s legacy at the White House these days, only a focus on developing good policy that might have a long-term impact. “The president’s attitude is, ‘History is going to write the legacy long after we are all dead or in no position to affect it — so why worry about it?’ ” Rove said.

Yet history is never far from Rove’s mind. While he has kept a low profile in Washington since the midterm election losses took some of the edge off his reputation as a political genius, Rove, a Bush senior adviser and deputy chief of staff, has begun trying to put his own distinctive spin on current events and the longer historical view.

He spoke last month to GOP partisans gathered for a Lincoln Day dinner in Springfield, Ill., where he argued that the midterm losses, while painful, were in keeping with historical patterns for the second term of a two-term president. Later, he gave an overview of the historical development of presidential communications before a group of students at Texas State University.

On Thursday, he came to an unlikely venue, a forum sponsored by the public service school started by former president Bill Clinton at the University of Arkansas. His topic was again historical: an appraisal of the debts that presidents owe their predecessors. He waxed at length about Harry S. Truman’s creation of the National Security Council and Clinton’s National Economic Council, and how both institutions have made the modern president stronger and more effective.

His point was that presidents often come to adopt institutions and policies created by their predecessors, and Rove clearly suggests that this will one day happen as well to the institutions and policies shaped by Bush. “Presidents set in motion certain things that their successors evaluate and decide by and large, particularly the structural ones, to adopt,” Rove said in the West Wing interview.

He said that the biggest Bush legacy will be what he terms the “Bush doctrine.” It “says if you train a terrorist, harbor a terrorist, feed a terrorist, you will be treated like a terrorist yourself. And then the corollary of that, which is that we will not wait until dangers fully materialize before taking action.”

Bush has spoken in similar terms. In public and private settings, he has discussed his desire to leave his successors stronger tools for dealing with the “war on terrorism,” the enterprise he sees as the central mission of his presidency. The inference is that while would-be presidents may criticize tactics such as his military tribunals and warrantless electronic surveillance, they will come to recognize the necessity of such policies in a protracted struggle against Islamic radicalism.

Despite Rove’s disclaimer, there’s plenty of evidence that the Bush legacy is of more than passing interest at 1600 Pennsylvania Avenue. Plans for the Bush library are taking shape, and there seems to be a loose White House campaign to try to define Bush’s tenure more favorably than the rough verdict now being rendered by the American public, largely over the Iraq war.