Just Another Day in Amman or Baghdad 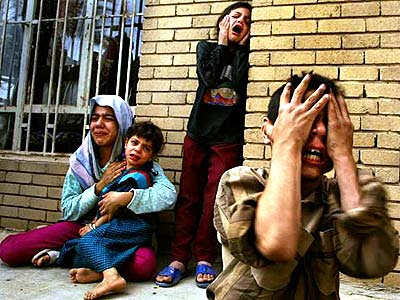 Over the past two years, here in Amman, Jordan, I’ve regularly visited the family of Umm Hamdi, an Iraqi woman forced out of her native Iraq four years ago by terrifying death threats after her husband, very likely prey to that same threatened violence, disappeared. Although often met with the proverbial “cold shoulder” when trying to improve conditions for her family, she persists,–in the daytime she does child care for another family and, in the evening, she knits, sews, and makes handicrafts to sell in a local market. Umm Hamdi is tough, strong and fiercely determined to provide for her children. Nevertheless, she’s wretchedly insecure as a single mother and one more refugee among thousands in a country where resources to cope with her anxious needs are very slim. And she is worried for her son who is still in Iraq.

Two nights ago, I turned up to her small bare apartment during an evening when her young daughters were out in the care of a local charity and she was home alone. I saw how worn out she was from working to support them – but more telling on her is the frustration and remorse she feels for Hamdi, her teenage son, who is barred from entering Jordan because he is a young man over 15 years of age, and whether for fear of spillover violence or from a wish to concentrate its taxed charitable resources among women and children, Jordan’s policy strictly bars him entry. In Iraq, Hamdi lives with a family that resents him for his unemployed status, (there are no jobs), and can barely spare the little support they offer him.

Umm Hamdi is stricken with remorse over separation from her son. In regular phone calls, he learns that his sisters are going to school, that one has completed a vocational training program, and that when the oldest daughter was recently married the family did everything they could to give her a traditional wedding. The anguish overwhelms her as she recounts their latest conversation: “You do everything for your daughters,” he had shouted, over the phone: “everything for them, but what about me? What about me? I am your son!” She clutches her hands over her eyes. Between sobs, she repeats, “My son, my son.”

Her son is one of many thousands in Iraq who are out of luck, out of work, undereducated, and lonely for parents and siblings lucky enough to escape to neighboring countries.

The International Organization for Migration (IOM) says that poverty is driving Iraq’s boys and young men, out of desperation, into the militias. A 2007 IOM report noted that “militant fighters sometimes buy the loyalty of displaced persons by providing them some of the things they need, such as food and shelter. More and more children are joining these armed groups, the militias and the insurgents,” said IOM officer Dana Graber Ladeck. “Sometimes they do it for money and sometimes for revenge, but we’re finding more and more child soldiers, so to speak.” (January 30, Voice of America interview) 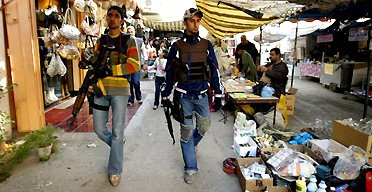 Some youngsters agree to carry guns and to man checkpoints for the strongest and most heavily armed militia in their country, the U.S. military. Reporting for Reuters, Adrian Croft recently wrote about a “ragtag band of men toting AK-47s at a checkpoint in Baghdad’s Sadr City,” some of 500 youngsters the US had recruited as part of a new plan to “strengthen the Iraqi army’s hold” in the backyard of U.S. rival Moqtada Sadr. (Jordan Times, June 27). New recruits risk their lives to earn $300 a month, guarding these checkpoints. It’s undoubtedly one of the best jobs in town. Will this option, will one like it, attract Umm Hamdi’s son?

Other Iraqi youngsters have been swept up by the U.S. military and sent to prisons, without charge, as a measure to prevent them from joining an Iraqi militia. On May 19, 2008, Fox News reported that the U.S. military is holding about 500 juveniles suspected of being “unlawful enemy combatants” in detention centers in Iraq. In August of 2007, in anticipation of the “troop surge,” CNN reported that the US had imprisoned, without charge, 800 Iraqi youngsters (or “security risks”) between the ages of 11 and 17, in a “prison school,” to prevent them from lending their bodies to militias as decoys or snipers. The CNN reporter said that, within the school, textbooks and classrooms were another “weapon” against terror. Commanding officer Lt. Glenn expressed his goal: “We ensure that when they are released that they don’t – they pick up a book instead of an AK-47 or laying an IED. And that’s what this really gets back to.” And when it gets back to young men like Hamdi, the message is perfectly clear: the U.S. will supply plenty of guns and explosives as long as the attacks are done in the name of protecting U.S. “security.”

Umm Hamdi doesn’t want her son to pick up a gun or lay an explosive device, for Iraq or for anyone. She would rather see him pick up a book. She cries herself to sleep at night wishing she could just see him. But she can’t bring her daughters back to the maelstrom of violence her native country has become with the U.S. invasion. And with Jordan straining to contain the refugees it has absorbed, she can’t bring her son out of Iraq.

Would it reassure her to think that Hamdi might find more secure shelter and achieve some educational goals if U.S. military jailers could imprison him for a year or so? Would it help if I told her that millions of impoverished parents in the U.S. worry that their sons might land in jail, and that many see the military as a better option?

I talked with her for a while longer. Her daughters returned from the event the charity had hosted for them, their faces sparkling with glitter and their arms colorful with painted designs. Umm Hamdi wiped away tears from a suddenly, forcedly, cheerful expression. She fetched a small ball of yarn – royal blue – and started rapid work to knit me a sweater, a parting gift I will take with me when I leave here. “It’s cold in Chicago, very cold!” she said, laying down the needles and yarn. She grabbed her shoulders to help me understand that she didn’t want me to have cold shoulders. “No, we don’t want you to be cold.”

This entry was posted in RagBlog and tagged Iraq, Iraq Occupation, Middle East. Bookmark the permalink.