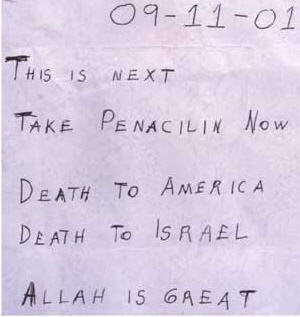 The FBI’s lead suspect in the September, 2001 anthrax attacks — Bruce E. Ivins — died Tuesday night, apparently by suicide, just as the Justice Department was about to charge him with responsibility for the attacks. For the last 18 years, Ivins was a top anthrax researcher at the U.S. Government’s biological weapons research laboratories at Ft. Detrick, Maryland, where he was one of the most elite government anthrax scientists on the research team at the U.S. Army Medical Research Institute of Infectious Disease (USAMRIID).

The 2001 anthrax attacks remain one of the great mysteries of the post-9/11 era. After 9/11 itself, the anthrax attacks were probably the most consequential event of the Bush presidency. One could make a persuasive case that they were actually more consequential. The 9/11 attacks were obviously traumatic for the country, but in the absence of the anthrax attacks, 9/11 could easily have been perceived as a single, isolated event. It was really the anthrax letters — with the first one sent on September 18, just one week after 9/11 — that severely ratcheted up the fear levels and created the climate that would dominate in this country for the next several years after. It was anthrax — sent directly into the heart of the country’s elite political and media institutions, to then-Senate Majority Leader Tom Daschle (D-SD), Sen. Pat Leahy (D-Vt), NBC News anchor Tom Brokaw, and other leading media outlets — that created the impression that social order itself was genuinely threatened by Islamic radicalism.

If the now-deceased Ivins really was the culprit behind the attacks, then that means that the anthrax came from a U.S. Government lab, sent by a top U.S. Army scientist at Ft. Detrick. Without resort to any speculation or inferences at all, it is hard to overstate the significance of that fact. From the beginning, there was a clear intent on the part of the anthrax attacker to create a link between the anthrax attacks and both Islamic radicals and the 9/11 attacks. [ … the letter sent to Brokaw is pictured above]

The letter sent to Leahy contained this message:

We have anthrax.
You die now.
Are you afraid?
Death to America.
Death to Israel.
Allah is great.

By design, those attacks put the American population into a state of intense fear of Islamic terrorism, far more than the 9/11 attacks alone could have accomplished.

Much more important than the general attempt to link the anthrax to Islamic terrorists, there was a specific intent — indispensably aided by ABC News — to link the anthrax attacks to Iraq and Saddam Hussein. In my view, and I’ve written about this several times and in great detail to no avail, the role played by ABC News in this episode is the single greatest, unresolved media scandal of this decade. News of Ivins’ suicide, which means (presumably) that the anthrax attacks originated from Ft. Detrick, adds critical new facts and heightens how scandalous ABC News’ conduct continues to be in this matter.

During the last week of October, 2001, ABC News, led by Brian Ross, continuously trumpeted the claim as their top news story that government tests conducted on the anthrax — tests conducted at Ft. Detrick — revealed that the anthrax sent to Daschele contained the chemical additive known as bentonite. ABC News, including Peter Jennings, repeatedly claimed that the presence of bentonite in the anthrax was compelling evidence that Iraq was responsible for the attacks, since — as ABC variously claimed — bentonite “is a trademark of Iraqi leader Saddam Hussein’s biological weapons program” and “only one country, Iraq, has used bentonite to produce biological weapons.”

ABC News’ claim — which they said came at first from “three well-placed but separate sources,” followed by “four well-placed and separate sources” — was completely false from the beginning. There never was any bentonite detected in the anthrax (a fact ABC News acknowledged for the first time in 2007 only as a result of my badgering them about this issue). It’s critical to note that it isn’t the case that preliminary tests really did detect bentonite and then subsequent tests found there was none. No tests ever found or even suggested the presence of bentonite. The claim was just concocted from the start. It just never happened.

This entry was posted in RagBlog and tagged Conspiracy, Corporate Media, Terrorism. Bookmark the permalink.