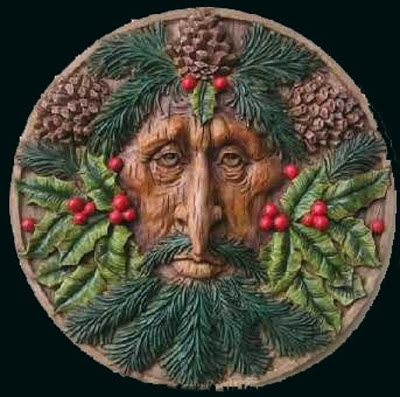 Commemorate change with items associated with the Holly King.
Celebrating Lord Sun’s rebirth and
capturing the energy of Yule 2010

Tuesday, December 21, 2010, is Yule. It is a Full Wishing Moon and a Lunar Eclipse. Eclipses are times of major changes; Full Moons are times of realizing intentions; Tuesday is Tyr’s day and this Norse god may be considered comparable to Mars as he is a warrior, the god of single combat. All in all, Yule 2010 is a time of Great Energy. The challenge is how to capture and use this energy in positive ways.

The emphasis of this celebration is Lord Sun’s rebirth, signaling the end of the Time That Is No Time. Decorations and themes associated with Yule involve symbolism reflecting change, evolution, the turning of the Wheel of Life, renewal, and light.

Use evergreens (real, if possible), sprigs of holly, mistletoe, 8-spoked wheels, and candles (red, white, green) in your decorations. One of the ways to commemorate changes is to use items associated with the Holly King and the Oak King.

The Holly King, God of the Waning Year, traditionally wears a sprig of holly in his hat, wears red clothing, and drives a sled pulled by 8 reindeer (representing the 8-spoked Wheel of Life). He will be supplanted by the Oak King, God of the Waxing Year, at the end of their ritual battle or dance. Similarly, the full lunar eclipse brings darkness from which light emerges.

I recommend you include activities representing change, rebalancing, and forward motion in your program for this celebration. Prepare to let go of whatever it is that you no longer need. Let the light of Lord Sun and a full Lady Moon pull you from the Past into the Now and on into the Future.

Serve your guests a robust feast including roast meat, apples, nuts, cider and/or Wassail. You will want to raise a toast to Lord Sun on this day welcoming his return and the prosperity associated with that return.

Let the mixture “cure” for a day or two before using. Drop the incense onto a heated charcoal tablet and use a feather to waft the smoke around you and your guests. Focus your energies on themes such as: Balance, Renewal, Positive Change.

[Kate Braun’s website is www.tarotbykatebraun.com. She can be reached at kate_braun2000@yahoo.com.]