The paper, which quickly became Detroit’s cutting-edge news source, is the longest-running underground newspaper from the Vietnam era. 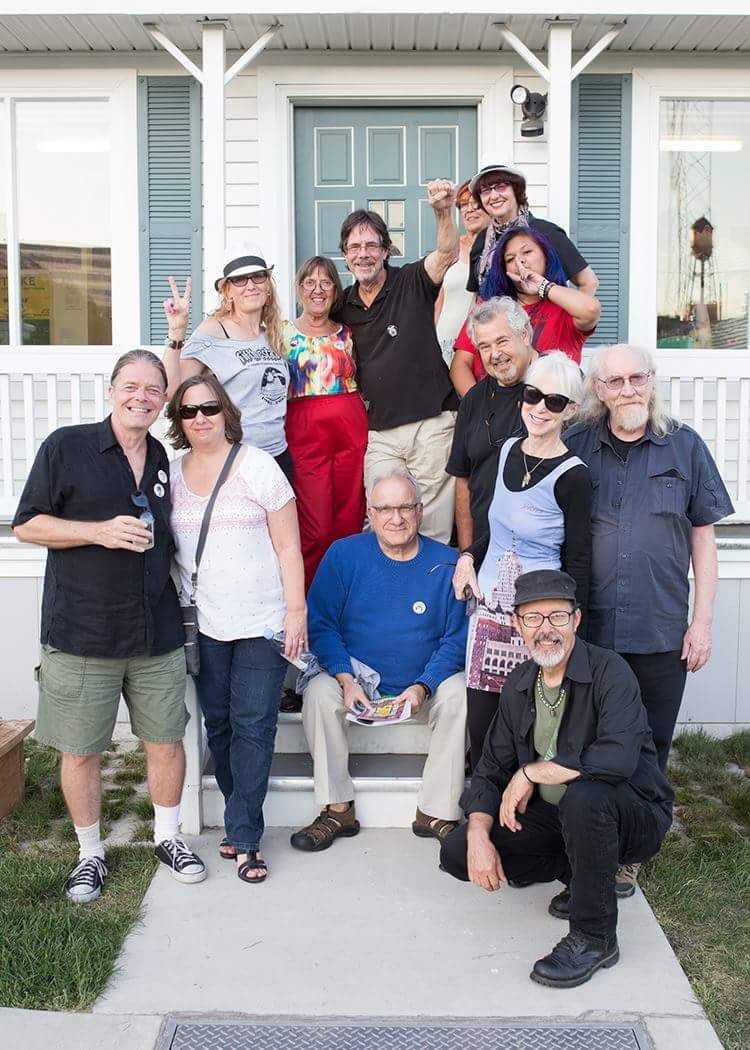 Former Fifth Estate staffers, supporters, and reunion organizers. In the back with raised fist is Peter Werbe; to his left is Leni Sinclair and to his right, Laura Grimshaw; and seated, in blue sweater, is the paper’s founder, Harvey Ovshinsky.

[This is the second of a three-part series written for The Rag Blog by underground press historian Ken Wachsberger. Part I was about the 50th reunion of the Berkeley Barb.]

It didn’t take long for the paper to become Detroit’s cutting-edge news source on issues surrounding the local antiwar and Civil Rights movements, feminist and LGBT issues, the emerging youth counterculture, and dissident GIs, all issues that the mainstream press was ignoring or relegating to insignificant locations of back pages.

The Fifth Estate transformed into an anti-authoritarian, anarchist paper in 1975.

Today, the Fifth Estate, named after the coffee house on Sunset Strip that provided office space for the Free Press, is still around, the longest-running underground newspaper from the Vietnam era, having transformed into an anti-authoritarian, anarchist paper in 1975, moved its base to Tennessee in 2002, and returned to Detroit in 2009.

Harvey left the paper in 1969 and was replaced by a three-person editorial group that included Peter Werbe. Peter, already a writer for the paper since 1966, is still a member of the paper’s staff collective, as well as being host of the longest-running phone-in talk show in radio history, Nightcall.

To what does Fifth Estate attribute its longevity? According to Peter, “The other underground papers collapsed because they were rooted in an era whose politics and culture collapsed. The FE found a new set of ideas, a movement with a philosophy, anarchism, that also located a new readership. Rather than being focused just in Detroit, the FE expanded its readership internationally.” 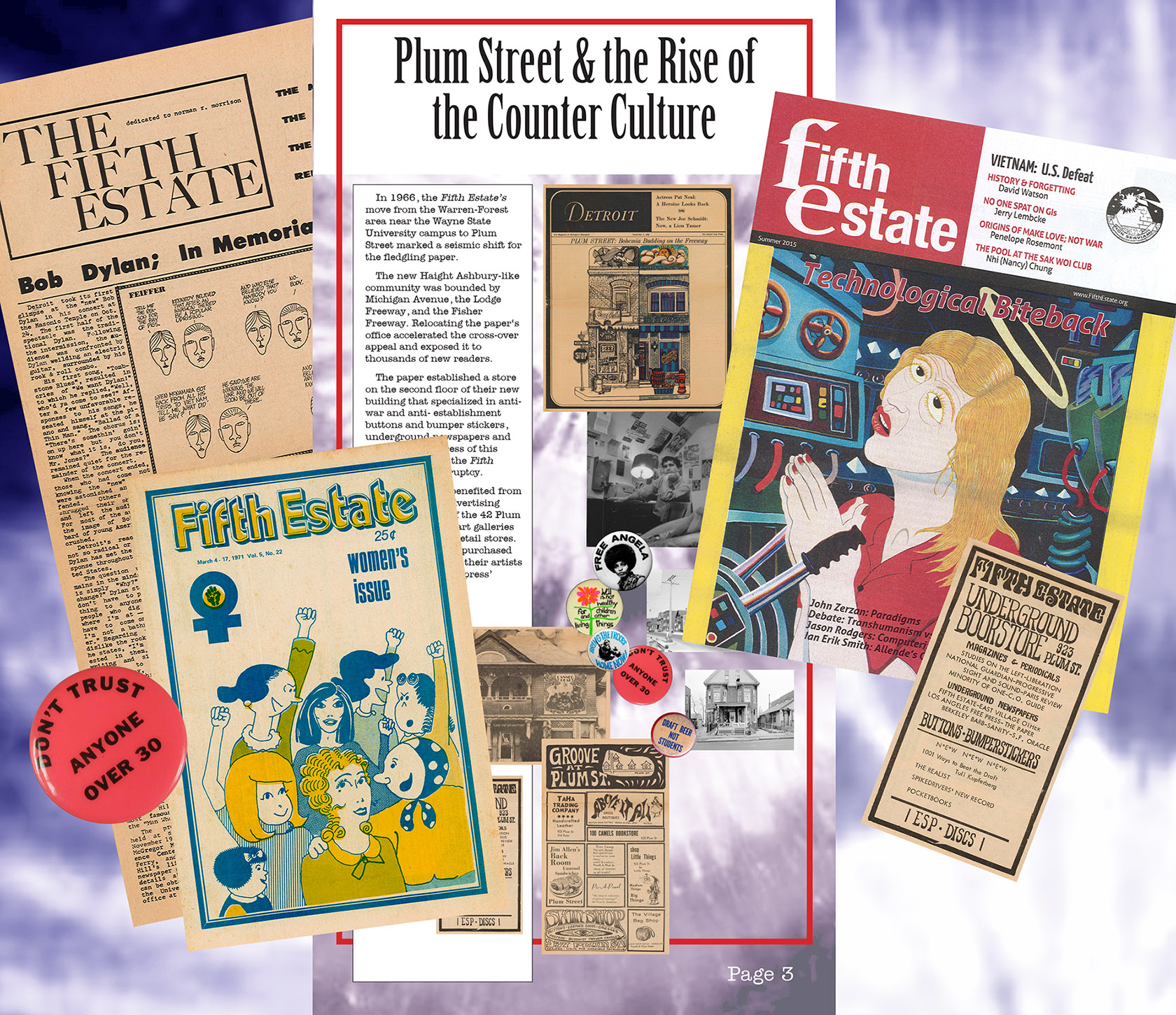 The end result was a grand mix of exhibits, education, and entertainment.

Plans for the reunion began to take shape in December 2014, when Harvey called Peter and his wife, Marilyn, another Fifth Estate long-timer, and asked them what ideas they had for the reunion. Peter was thinking of a potluck dinner; Harvey had bigger ideas. The end result was a grand mix of exhibits, education, and entertainment.

“Lots of people helped put it together,” Peter acknowledges, giving special recognition to the institutions that hosted the main events for their financial support and staff assistance. As far as promoting the reunion, “We just put out the word on Facebook and our web page; it went mini-viral, and people showed up.”

On August 29, “Start the Presses: 50 Years of the Fifth Estate,” a text-and-graphic-driven exploration of the paper’s founding years and its impact on Detroit and the local media, began its year run at the Detroit Historical Museum. Twelve days later, on September 10, “You Can’t Print That: 50 Years of the Fifth Estate” opened at the Museum of Contemporary Art Detroit (MOCAD). It runs until January 3, 2016.

I visited the MOCAD exhibit on Saturday, September 19, when I attended the afternoon viewing, panel discussion, and staff reunion along with a hundred other friends and veteran staffers. The event was held on the MOCAD grounds inside Mobile Homestead, a full-scale replica of Detroit artist Mike Kelley’s childhood home that is a well-known community gallery and meeting place.

There, guests found, strategically placed to capture the atmosphere of the paper’s old offices on Warren Forest and Plum Street, a collection of office supplies from the era that included manual typewriters from Smith Corona, Royal, and Remington; a Bell & Howell mimeograph machine; a light table; a pack each of Top and Vogue rolling papers; a rotary telephone; a stack of index cards; and a roll of Avery correction tape.

For display only was a bottle of wine bearing the label ‘Wine Factory Marxist Red.’

For display only, not available for sipping, was a bottle of red wine bearing the label “Wine Factory Marxist Red: a true red … authoritative yet a real party wine.”

The exhibit, hanging on walls and arranged in glass cases, was a greatest hits of historic covers and inside feature pages; cartoons by Gilbert Shelton, Skip Williamson, and others; photos by Leni Sinclair, Millard Berry, and Daymon Hartley; and flyers promoting events supported or organized by the paper, including one to protest Ronald Reagan’s war on drugs during a visit to Detroit’s Cobo Arena: “Bring the President Your Piss!”

Posters demanded freedom for the Chicago 8; celebrated “Dope, Queer Sex and Anarchy”; hailed Marx (Groucho) and Lennon (John); alerted black draft-age men to “The Black Man’s Stake in Vietnam”; promoted the Vietnam Veterans Against the War’s three-day Winter Soldier Investigation that was held in Detroit in 1971 to showcase war crimes our troops and tax dollars were committing in Vietnam; and, of course, urged readers to “Fuck the Draft.”

I stopped in front of one 1975 cover piece that proclaimed “Easter Cancelled: Christ’s Body Found.” I laughed out loud while reading about how the staff put copies of that issue in Detroit News coin boxes as the display issue and pasted others on doors of local churches before Easter Sunday, and I caught the attention of the man standing next to me, Millard Berry, the photographer who took the issue’s cover photo. 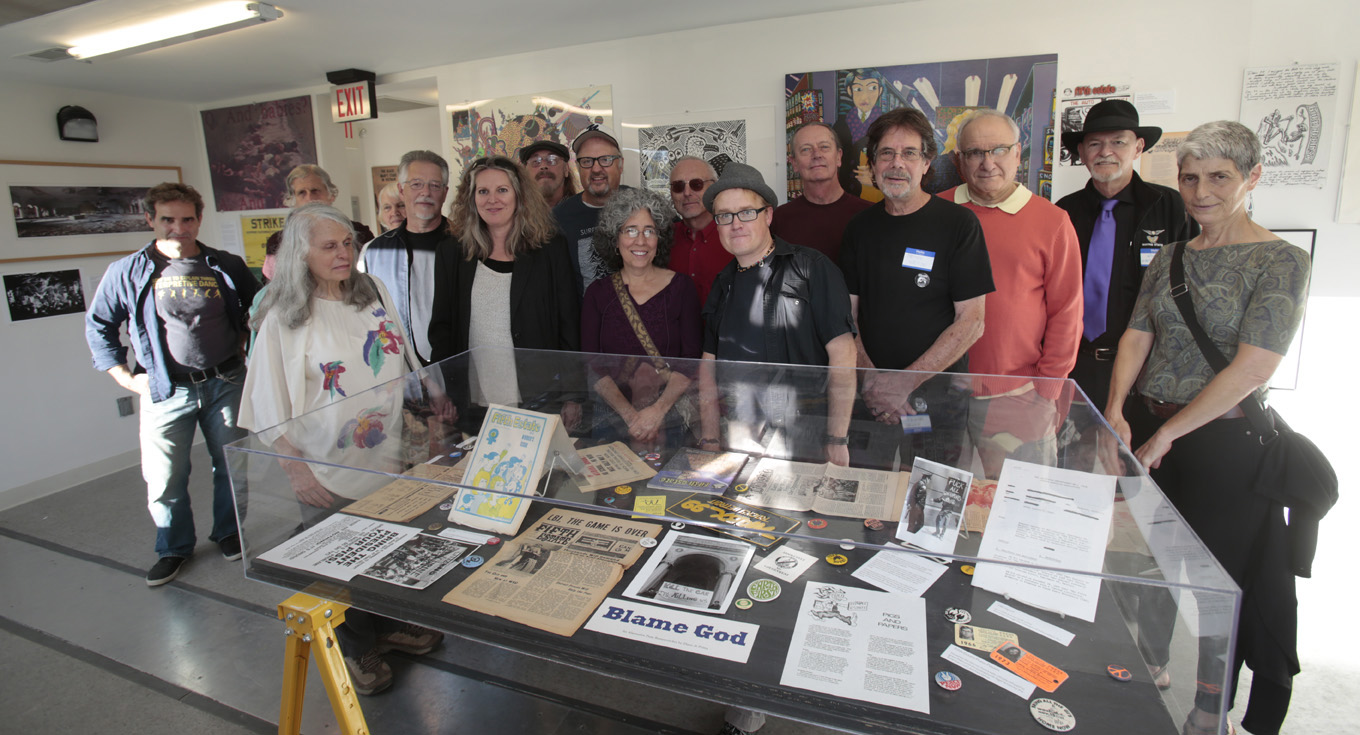 Current and former staffers at a reunion exhibit. Peter Werbe and founder Harvey Ovshinsky are third and fourth from the right, respectively. Photo by Rebecca Cook.

We think sometimes of reunions as being simply opportunities to escape into nostalgia but the Fifth Estate’s longevity enables us to see also how much — or how little — has changed:

Dave Sands, editorial group member of the local alternative paper, Critical Moment, served as moderator of the afternoon panel. He asked the four panelists questions about their backgrounds, how they came to the Fifth Estate and what they did there, the paper’s collective process, and insights as to where the paper is headed.

David Watson first read the Fifth Estate while he was still in junior high school.

David Watson first read the Fifth Estate in 1965 or 1966 while he was still in junior high school, where he published his own underground paper, The Voice of Youth. His father, a World War II veteran, opposed the Vietnam War and Watson followed in his footsteps, including being a founding member of the Detroit High School Mobilization Committee to End the War in Vietnam, which was located next door to the Fifth Estate’s office.

Watson reflected on the intransigent, uncompromising radicalism of the Fifth Estate after it first became an anti-authoritarian paper. “It’s easy to say ‘Fuck Authority, but we had to learn to live both against this society and within it,” he said. “And so we ended up engaging in what we considered reformist activities as experiments in truth, after Gandhi’s phrase. We had to make compromises in our daily lives, as well, working for wages like everyone else.”

He added, “Anarchism becomes an issue of how to live within this society and yet outside of it, and retain your humanity and your dignity.” The Fifth Estate emerged “at a time when kids were saying they didn’t want to live meaningless lives.” He believes the paper has remained consistent with its 1960s origins.

Poet, teacher, and translator Marilynn Rashid met the Cass Corridor community and the staff of the paper through David and was drawn into staff involvement “by the process of creating a paper, including arguing to achieve consensus.”

The paper became ‘the center of our lives and an integral part of a dynamic activist community.’

She said that the paper became “the center of our lives and an integral part of a dynamic activist community.” She appreciated as well “the social and political connections made with other publications in the U.S. and in Europe, and with a number of movements: the local Evergreen Alliance, the anti-intervention in Central America movement, the antiwar and anti-nuke community. Old Italian and Spanish anarchists discovered us; we discovered them.”

She recalled the paper’s process for reviewing articles. “We stapled a cover sheet to every submitted article. The sheet had three columns and the headings ‘Run, Hold, Ice,’ with space for comments below. After we read and commented on a submission, we wrote our initials in one of those columns and then met to come to an agreement on which articles we’d print.” 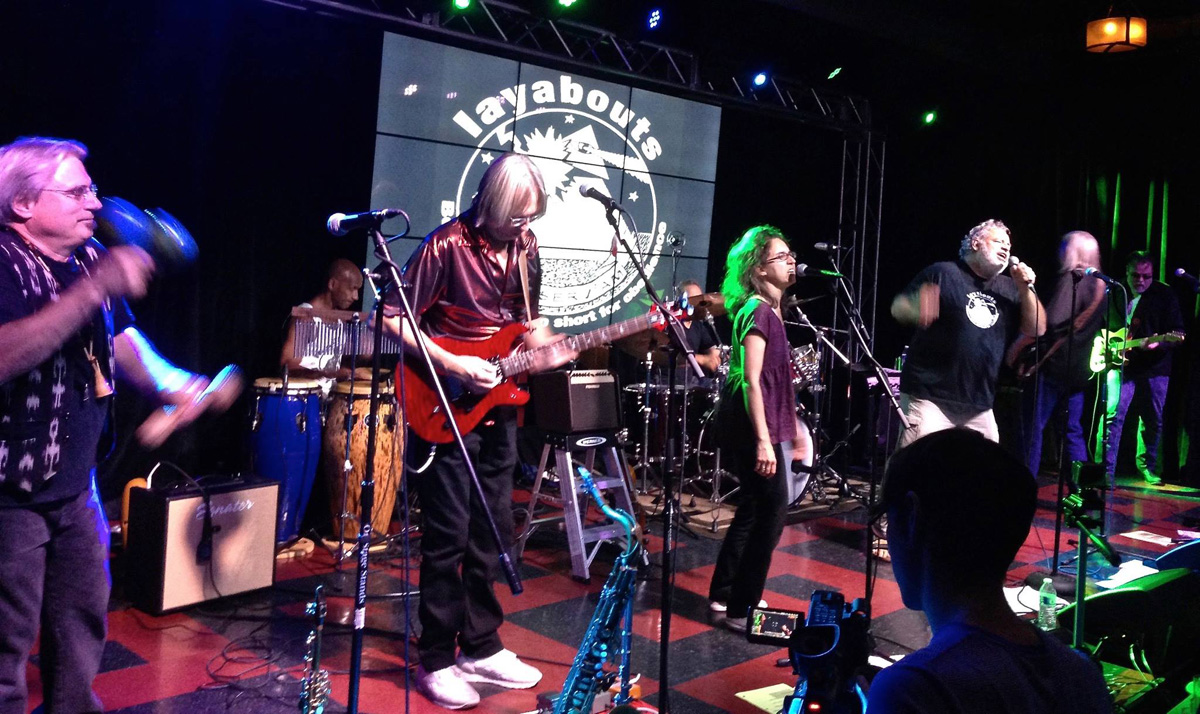 The Layabouts perform to a packed crowd at the HopCat on Sept. 19, 2015. Photo by Roberto Warren.

Andrew Smith (aka Sunfrog) recalled the energy of the Corridor scene at the end of the last century, including the concerts and protests placed “in a context that was post-industrial collapse.” Then he moved to Tennessee, where “people talk about Detroit in hushed tones. But they don’t mess with you when they know you’re from Detroit.”

During the buildup to the Iraq War of 2003, he convinced the staff, who at the time were putting out only one issue a year, that he could conjure up a collective in Tennessee. In late 2002, the paper relocated. Andrew recalled this period as a time when the culture of the office was becoming digital, with no dampening effect on the spirit of the paper, and was showing more consciousness about sexuality and queer activism.

‘We’re passionate about everything: layout, content, little and big details.’

As a college professor, he said, he found the Fifth Estate experience “the most un-schooling experience I ever had. We’re passionate about everything: layout, content, little and big details. There was a culture of disagreement and cool tension that led to a greater good, with radical transformation of society from the bottom up.”

Sylvie Kashdan was brought up in a poor multicultural neighborhood in New York where she learned that the personal is political and the political is personal.

She participated in the Civil Rights movement when her black friends invited her to picket businesses to hire black people. She recalled developing a feminist consciousness because of being “treated like shit” as one of the few female students who excelled in math and science. She became a subscriber to Fifth Estate in 1975 when it became anti-authoritarian and since 2013 has been one of five editors, who edit all submissions and discuss all decisions.

“Being an independent, anti-authoritarian anarchist, I see Fifth Estate as filling the gap between more narrowly focused journals like Black Seed and Rolling Thunder and academic publications. It’s accessible and sophisticated, and generally without condescension or dogmatism, and it speaks to all ages.” Using the current issue’s theme of the Vietnam War, she noted that it is an example of how the paper has served the important function of putting issues in historical context.

Unfortunately I wasn’t able to stick around after dinner to attend the dance/party/concert at the HopCat but, as one attendee told me a week later, Detroit’s The Layabouts, the same group that rocked out at the Fifth Estate’s twentieth- and thirtieth-anniversary reunions, played to a crowd of 400 in a room that was “packed, out of control.”

In looking back at the organizing effort and the outcome, Peter Werbe is pleased with the success of the reunion:

The only disappointment was that there wasn’t enough representation from the staffs over the decades and that needed to be organized as a priority to track down the hundreds, maybe thousands, of people who worked on the FE over the years.

What’s next is hard to say. We don’t plan any changes. Our readership is expanding and we’re looking to 25-year-olds who will commit to organizing the 100th anniversary of the magazine.