There is virtually no part of our culture that is not borrowed from somewhere else. 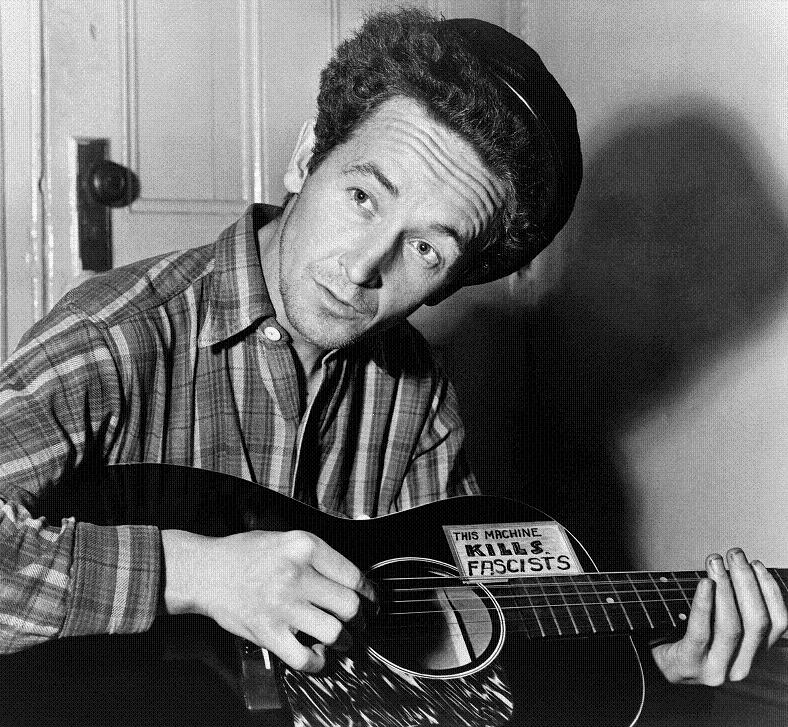 Woody Guthrie: “I steal from everyone.” Photo by Al Aumuller / New York World-Telegram and the Sun / Public Domain.

In fact, Pete Seeger spent a good deal of his 94 years learning music from a variety of cultures and teaching others the songs and tunes he encountered in his travels. Without Pete’s work, I may never have heard Cuban songs. Certainly, without his work and that of Zilphia Horton, Guy Carawan, and Frank Hamilton altering an old Negro spiritual, we might not have had what came to be called the anthem of the civil rights movement in this country, “We Shall Overcome,” which has been heard in other struggles around the world, such as in South Africa’s Soweto Township, in Tiananmen Square, and North Korea.

And the history of the derivative song goes back at least to the lyrics of gospel music composer, the Reverend Charles Tindley of Philadelphia, with the tune traced back to antebellum times.

So, whites and blacks both contributed to the development of a song that has often made me very emotional, sometimes to the point of tears. How can this semi-cultural appropriation be a bad thing?

‘Oh, he just stole from me; but I
steal from everyone.’

Adopting (or stealing) ideas and words and images and objects is ubiquitous. As Woody Guthrie once said when someone suggested to him that another person had stolen some lyric and tune from him, “Oh, he just stole from me; but I steal from everyone.”

Is it wrong for me to eat tacos and tamales? After all, I am not of Mexican origin. What about gumbo? I’m not cajun. Without people from other groups enjoying this “foreign” cuisine, a lot of restaurants would go broke. Probably eating chili would be okay, though, because its origins are so thoroughly obscure and diverse no culture can positively claim it as its original food. Something similar can be said for hummus, with virtually every Middle Eastern culture making some origin claim to the nutritious dish.

White children, who are neither cowboys nor Indians, dress up in some style reminiscent of both groups and carry out imaginative play assuming identities they may know little about. I have a picture of my eight year old blond younger brother wearing an Indian head dress, something he should be tortured for having done, I’m sure. Fortunately for him, he died before the cultural appropriation posse formed. I can understand someone being upset when an aspect of their culture is unfairly ridiculed, but white boys mean no disrespect when they play “cowboys and Indians,” and sometimes the Indians win or actual peace prevails.

An aunt of mine from Louisiana, who was not African-American, once painted a scene from her childhood of an African-American community located in the Louisiana swamps. I always admired the painting and it is hanging in my home office, where I am writing this essay.

Pete Seeger was known for his banjo playing, but the banjo is an instrument with African origins.

Back to Pete Seeger: He was widely known for his banjo playing, but the banjo is an instrument with African origins. Was it wrong for him to write an excellent book about how to play the 5-string banjo, a version of that old African instrument? And few of us will forget the musical duel between a banjo and a guitar, both played by white people, seen in the movie “Deliverance.” And the guitar probably derived from a Spanish instrument and developed into the variety of guitars we have today, guitars played by millions of people who are not Spaniards.

Just as no one has the right to dictate to me what food I eat, neither does anyone have the right to tell me how to style my hair or how to dress. They can have their opinions about such matters, but they can’t compel me to follow those opinions. For at least the second time in my seven plus decades, I have seen Mohawk haircuts become popular with a small percentage of the population. While I might find them strange, I have no say about how others choose to style their hair.

I also think it is the height of folly to pay large sums of money for pre-torn jeans. To me, such jeans are simply worn out and due for replacement. To those who wear them, however, they are a fashion statement, even if I don’t understand the meaning.

I think it is the height of folly to pay large sums of money for pre-torn jeans.

The last two novels I read, both by Leonard Pitts, Jr. — Freeman and Grant Park — included white characters even though Pitts is African-American. I did not begrudge his right to invent those characters. In fact, he invented black characters for Freeman that were beyond his ken. To do so, he did historical research to make those characters authentic to his readers. He even made up a conversation between one of his characters in Grant Park and Martin Luther King. The words he put in King’s mouth were made up, but they had the ring of truth because he took pains to assure that they would express the views and attitudes that King had or might have had about the subject discussed.

This caused me to wonder exactly whom I would ask to get “permission” to write about the culture of migrant laborers working in the fields of Florida, or North Carolina, or New Jersey, or California — laborers who might be Puerto Rican, Filipino, Mexican-American, African-American, Haitian, or Jamaican? Who would give me permission to describe the lives of poor whites in West Virginia, a group as unlike those whites I grew up with as Cubans are?

Do I have to petition the Prime Minister of France to use the phrase ‘vive la différence’?

To whom do I ask permission to use the words okay (Choctaw) or vamoose (Spanish) or algebra (Arabian) or tea (Chinese) or banana (West African) or balcony (Italian) or hamburger (German) or cookie (Dutch) or mosquito (Portuguese)? And do I have to petition the Prime Minister of France to use the phrase “vive la différence” or even the word blond?

There is virtually no part of our culture that is not borrowed from somewhere else. The sweet potato pie I made this week had its origins in Africa. The corn I ate came from some native inhabitants of this continent, as did the smoked salmon I consumed. We are an appropriated, revised, and invented culture. We have provided elements of our culture to others, or they just took what pleased them or filled a niche (I hope it is “okay” to use this French word) in their own culture.

Cultural appropriation is ubiquitous. We don’t own our culture, even if we feel a special kinship with it. All culture is open source. If some element of another culture will meet your needs, it is there for the taking. And there are no gatekeepers, except the self-appointed ones. To these, no tribute is due.