Mistakes in ‘Zealot: The Life and Times of Jesus of Nazareth,’ show that Reza Aslan lacks the necessary background to write a historical work about the period and Jesus’s place in it. 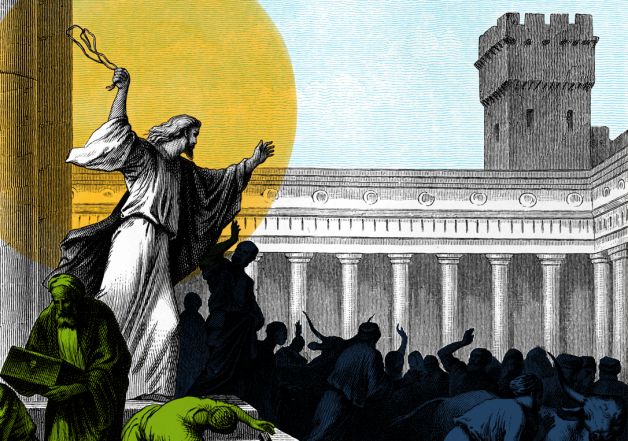 Just over 78% of adults in the U.S. report that they are Christian, according to the latest Pew Research findings. The thesis of a relatively new book by Reza Aslan should interest them. In Zealot: The Life and Times of Jesus of Nazareth, Aslan portrays Jesus as a revolutionary zealot intent on the overthrow of the Romans in order to drive them from the land of Israel — land promised to the Jews by God.

It is not a new thesis. I remember Christians and others in the 1960s who viewed Jesus as a revolutionary for other reasons — mainly as a figure who wanted to create a society of equality that was closer to communism than to corporate capitalism.

The best critique of Aslan’s book — and by any standard, the longest — has been made by Bart Ehrman on his Bart’s Blog, in a series of 13 comments made over a three-week period earlier this year. Ehrman, a New Testament Biblical scholar and the James A. Gray Distinguished Professor at the University of North Carolina at Chapel Hill, blogs five or six times a week to raise money for charitable purposes.

Aslan claims that his book is based on real history, not conjecture.

Aslan claims that his book is based on real history, not conjecture, but Ehrman suggests otherwise. Ehrman finds fault with Aslan’s basic thesis “that Jesus was a politically motivated zealot who believed in the violent overthrow of the Roman empire, or at least believed that the Romans should be driven out of the Promised Land, as did so many others in his time and place.”

Ehrman suggests that the deficiencies in Aslan’s thesis arise from his lack of expertise in “the critical study of the New Testament, the history of early Christianity,” and several related fields encompassing the history of the Roman empire at that time and the study of the historical Jesus. In short, Aslan is not a scholar in any of these subjects and has written a book that requires — to be accurate — deep knowledge of all of them.

No one, and especially not Ehrman, has questioned that Aslan’s book is beautifully written. Aslan is an Associate Professor of Creative Writing at the University of California–Riverside, a Research Associate at the USC Center on Public Diplomacy, and a contributing editor for The Daily Beast. He has a Ph.D. in the sociology of religion, but that field does not encompass the areas of scholarship that Ehrman has identified as critical to support any thesis about the nature and character of Jesus.

Both Aslan and Ehrman agree that the Gospels are not reliable historical texts. As Ehrman describes them, they “are meant to be proclamations of the superiority of Jesus as the Son of God. They are not meant to be objective descriptions of political events.” To use them to describe historical events requires that the theological claims of the writings be sorted through with the tools of the historian — the historical criteria that can be used to determine what can plausibly be said to have happened over 2,000 years ago.

Ehrman points to the need to find out from historical sources from first-century Palestine what went on, looking for “independent attestation” of the events described. Other criteria that should be used include the “criterion of embarrassment” (that is, an account embarrassing to the author or the author’s belief or thesis is presumed to be true because the author would have no reason to invent an embarrassing account) and the “criterion of dissimilarity” (for example, if a saying attributed to Jesus is dissimilar to the Jewish traditions of his time and also from the beliefs of early Christians, it is likely to be authentic).

Such criteria help assess what has been made up or added by later storytellers. But Aslan never reveals his criteria to readers; therefore, readers cannot evaluate whether Aslan has arrived at valid conclusions on matters of historical importance.

For Ehrman, a crucial matter — perhaps the crucial matter — is to explain why the Romans crucified Jesus. If the basis for that “most certain historical datum about Jesus” (that “he was crucified under Pontius Pilate for calling himself the King of the Jews”) does not stand up to scrutiny, Aslan’s thesis is highly suspect. That thesis, as restated by Ehrman, is that “Jesus was killed for making a political claim that amounted to insurgency because he was a politically motivated Jew who believed in insurgency.” For Ehrman, the evidence points in another direction.

Ehrman finds glaring historical errors throughout Aslan’s book, but I will mention only a few. They mostly concern what Ehrman terms the “overarching themes about the political situation in Jerusalem that Jesus found himself in – a central feature of the book.” The false claims are important to Aslan’s view that the political situation explains the life, ministry, and death of Jesus.

One historical error is Aslan’s claim that, in Ehrman’s words, “Legions of Roman troops were stationed throughout Judea.” Aslan seems to see an occupied Judea. But Ehrman says that Jews in those days were not regularly confronted by Roman soldiers. There were soldiers with the governor in Caesarea, but Roman soldiers were not everywhere in Judea.

Aslan also misunderstands Jewish beliefs. Aslan’s claim that “Belief in a divine messiah would have been anathema to everything Judaism represents” is simply not true. Ehrman points to passages in Psalm 2:110, Psalm 45:6-7; and Isaiah 9:6-7 that suggest that “the messiah was to be the descendant of the kings, himself the ‘Son of God.’” The Book of Enoch, which is a sourcebook for ancient Judaism, refers to an understanding among Jews “that the messiah would be the divine Son of Man come from heaven,” in Ehrman’s words.

Aslan also claims that for a 30-year old Jewish man, as Jesus was at the beginning of his ministry, not to have a wife is “almost unthinkable.” But Ehrman finds no historical basis for such a claim, explaining that during Jesus’ time, “men outnumbered women by a good margin, since so many women died in childbirth.” This made it impossible for all Jewish men to marry. Further, apocalyptic Jews (such as Jesus) who believed the end of the world was coming soon intentionally did not marry because of their beliefs.

One topographical/geographical claim by Aslan — that it was a day’s walk from Nazareth to the capital city Sepphoris — is easily refuted by Ehrman, who calculates that it would take perhaps one and a half hours to walk the distance. Other sources indicate that is was about five miles between the two towns.

Aslan seems intent, too, on exaggerating the Roman presence in Jerusalem.

Aslan seems intent, too, on exaggerating the Roman presence in Jerusalem. He claims that Pilate marched “through Jerusalem’s gates trailed by a legion of Roman soldiers carrying standards bearing the Emperor’s image,” but, as Ehrman explains, a primary historian of the time, Josephus, wrote that Pilate’s entry into Jerusalem with soldiers was stealthy, done at night, with soldiers spread around the city, creating an unwelcome surprise for the inhabitants when they awoke the next day.

Aslan also claims that the Romans, in essence, declared war on the Jews, leading to the destruction of Jerusalem and the Temple in 70 CE. But Ehrman explains that there is no historical evidence for this. The only uprising that concerned the Romans was in Palestine:

The vast majority of Jews did not live in Jerusalem, or in Judea, or even throughout Palestine. Much like today, there were far, far more Jews living outside the national boundaries of Israel than within it. And remarkably, and strikingly, Romans did not punish other Jews outside of Palestine for the uprising within Palestine.

Jews were allowed to continue to worship God as they always had (except, of course, in the Temple, which no longer existed). Jews were not declared the enemies of Rome. Far from it. In most places, Jews had a privileged status in relationship to Romans (they were not required to participate in public sacrifices to the Roman gods, for example). The Jewish uprising in Palestine had nothing to do with that.

Another mistake about Roman Jewish history that Aslan got wrong is a claim that “Rome expelled every surviving Jew from Jerusalem and its surrounding environs [after 70 CE].”

Ehrman explains that Jews were not expelled from the city after 70 CE, but continued to thrive there for more than 60 years. It was another revolt in 132-35 CE that led to Jewish expulsion from Jerusalem, along with the re-naming of the city by the Romans.

Aslan also makes incorrect claims about the religious views of John the Baptist, the execution of “thousands and thousands” of Jews by Pilate, the crucifixion of Jesus in the presence of hundreds of dying criminals, that those crucified were “savagely scourged” as was “the custom for all those sentenced to the cross,” that Jesus’ disciples were all martyred for their belief in the resurrection, that Peter and Paul were similarly martyred by Nero in 66 CE for the same belief, that Christians ceased to convert Jews after the destruction of the temple in Jerusalem, that there was a great debate at the Council of Nicea about whether Jesus was divine or human, and many other historical claims.

Ehrman explains that no historical records or sources generally accepted as reliable by scholars of the period support any of the above claims. But such representations do spice up Aslan’s claim that the events are based on actual history of the period. However, history is not Aslan’s only weakness. Other mistakes related in his book about the New Testament provide even more evidence that Aslan simply doesn’t have the necessary background to write a historical work about the period and Jesus’s place in it.

In next week’s column, I will finish outlining Bart Ehrman’s critique of Aslan’s book. Those interested in the New Testament and the early history of Christianity will find Ehrman’s blog one of the most fascinating sites on the web. Limited information from the site is free, but to read all of Ehrman’s thoughts on numerous topics related to his 30 years of scholarship in his field, the reader must pay $24.95 a year, all of which goes directly to charity. It is Ehrman’s way of doing good while sharing information based on his research. You can find his website here.

For a different perspective, see Paul Buhle’s “Reza Aslan’s ‘Zealot: The Life and Times of Jesus of Nazareth.’” on The Rag Blog.