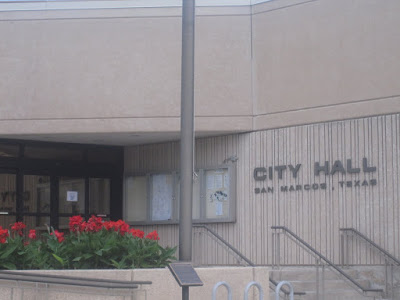 SAN MARCOS, Texas — An on-line review of agendas from 30 Austin-area communities reveals that almost half of area city councils use their elected positions to promote religion. Of those 30 towns and cities, 14 begin their meetings with invocations (usually prayers) according to their agendas. While nearly 47% of area municipalities promote this religious practice, the rest do not. Austin is the largest city in the area to do so.

The invocation practice I have studied the most, that of the City of San Marcos, demonstrates most of the problems with such government religious practices. San Marcos did not have such City Council prayers until then-Mayor Susan Narvaiz introduced the practice around 2006.

When Narvaiz (a recent Republican candidate for Congress defeated by Rep. Lloyd Doggett) became mayor of San Marcos in 2004, she set about to promote her evangelical religion through her elected position.

She may not have intended to attack the religious liberty of everyone who held different religious views, but that was the effect when she pushed all but one city council member to vote to begin having almost exclusively Christian prayers at the beginning of each regular meeting of the City Council. Apparently, divine guidance was not needed at special meetings and workshops.

While not everyone on the City Council at the time — including some who voted for the practice — approved of it, the fear of political reprisal caused most of them to go along with this disregard for the religious liberty of all San Marcos residents.

After challenges to the practice by the ACLU of Texas and Americans United for the Separation of Church and State, the City Council adopted a formal policy that, in effect, required nonsectarian prayers, but this requirement has been largely ignored by both the City Council and those included on its Invocation List — mostly local ministers approved by the City Clerk to give invocations.

In 2009, after hearing in person from ACLU attorney Fleming Terrell at a city council meeting, the Council directed the City Attorney to promulgate an Invocations Policy that met the Council’s preferences and would satisfy the leading Supreme Court case in this area, Marsh v. Chambers, 463 U.S. 783 (1983).

Marsh was a lawsuit challenging the invocation practice of the Nebraska Legislature. In Marsh, the Supreme Court allowed limited legislative prayer based on history and custom as a narrow exception to the Constitution’s prohibition of an establishment of religion by a governmental body. Of course, San Marcos had no such history and custom.

In Marsh, the invocation prayers were directed only to legislators in the Nebraska Legislature. Offered by the Legislative Chaplain, they never included any reference to Jesus or other Christian symbols or language, so they did not “advance” Christianity.

Normally, these kinds of prayers are referred to as nonsectarian. But even nonsectarian prayers can lead a reasonable observer to conclude that the sponsor of the prayers (the San Marcos City Council in this case) favors religion over non-religion. When the prayers use the name of Jesus, or include Christian symbols and language normally identified with Christian doctrine or belief, a reasonable conclusion would be that the City Council favors Christianity over other religions.

The City Council policy, adopted on August 4, 2009 (Resolution 2009-97R), provided that the City Clerk would maintain a list of clergy who would give invocations on a rotating basis; that the clergy would represent all faith traditions that could be found in or out of the city; and that the invocations would not be used “to advance any one religion, disparage any other religion, or proselytize,” quoting some of the language from the Marsh decision. The policy also provided that any clergy who violated the policy could be removed from the rotation list.

I have periodically reviewed the implementation of this policy and have recently reviewed all 42 regular meetings between March 1, 2011, and November 20, 2012.

In 34 of the meetings, invocations were given. In eight instances, a moment of silence was observed because no clergy member was available to offer a prayer. Twenty-one of the 34 prayers referred directly to Jesus. Nine other prayers referred to Christian symbols or used language associated with Christian doctrine or belief. Nearly 90% of the prayers promoted Christianity in their content, an unmistakable violation of the holding in Marsh.

Introductions of the guest clergy is another way the invocations promote Christianity. When their names are announced, so are the names of the churches they represent. Fifteen of the organizations associated with the clergy who participated over the past 20 months are Christian groups. Announcing these Christian affiliations publicly further involves the City Council in promoting and advancing Christianity, just as announcing other religious affiliations advances those religions.

It should be noted that the council violated its own policy when those who gave prayers were not clergy associated with a particular religion. One was the chaplain for the San Marcos Fire Department; one was a student involved with the local Catholic Student Center and St. Jude’s Chapel; one was an employee of the San Marcos Baptist Academy; one was a member of a local Muslim group; one was introduced as a Bahá’í “pastor,” although Bahá’ís do not have pastors; and one person is a Native American who is the proprietor of a business — the Cherokee Candle Shop.

The Invocation Policy resolution focuses on a brief summary of the Marsh decision. It does not concern itself with lower court decisions that have piled up since 1983 and that apply Marsh to other cases, some strikingly similar to the San Marcos situation.

For instance, in 2002, Rubin v. Burbank, 101 Cal.App 4th 1194, held that city council prayer ending “in the name of Jesus Christ” violated the Establishment Clause, even when only 20% of prayers had such references, citing Marsh as precluding prayers that advance any one religion.

The invocations at issue here, which specifically call upon Jesus Christ, are simply not constitutionally acceptable legislative prayer like that approved in Marsh. Rather, they embody the precise kind of “advance[ment]” of one particular religion that Marsh cautioned against.

In a footnote relevant to the San Marcos practices, the Wynne court found “that citizens customarily participated in the prayers by standing and bowing their heads. Indeed, citizens actively joined in the prayers by declaring ‘amen’ and sometimes ‘hallelujah’ at the conclusion.”

The practice of saying “amen” aloud at the conclusion of San Marcos prayers occurs at virtually every meeting. One pastor even invites the audience to join in his prayers by concluding with “And all God’s children said Amen,” which is always joined by a rousing chorus of “Amens” from the audience.

Frequently, those who give the invocations at San Marcos City Council meetings address the audience directly, importuning them to bow their heads or join with them in the prayer. In one instance the clergyman even interjected “hallelujah” and “glory” in his own prayer, giving it the flavor of a worship service.

It should be noted that the Wynne decision was appealed to the U.S. Supreme Court, but earlier this year that court refused to consider the case, so Wynne stands as an exemplar of the constitutional limits of city council invocation practice.

In another 2012 case, Galloway v. Town of Greece (New York), 681 F.3d 20, decided by the U.S. Court of Appeals, 2nd Circuit, the court held that town council prayers that contain Christian references two-thirds of the time, even when other faiths also give prayers, unconstitutionally affiliates the town with Christianity.

Many other facts about this case are strikingly similar to those surrounding the practices in San Marcos. The Town of Greece staff was responsible for inviting the clergy to give invocations, and the court noted the following:

A substantial majority of the prayers in the record contained uniquely Christian language. Roughly two-thirds contained references to “Jesus Christ,” “Jesus,” “Your Son,” or the “Holy Spirit.” Within this subset, almost all concluded with a statement that the prayer had been given in Jesus Christ’s name. Typically, prayer-givers stated something like, “In Jesus’s name we pray,” or “We ask this in Christ’s name.” Some prayer-givers elaborated further, describing Christ as “our Savior,” “God’s only son,” “the Lord,” or part of the Holy Trinity. One prayer, for example, was given “in the name of the Lord and Savior Jesus Christ, who lives with you and the Holy Spirit, one God for ever and ever.” Other prayers, including ones not expressly made in Christ’s name, spoke of “the role of the Holy Spirit in our lives,” and celebrated Christ’s birth and resurrection.

In the last 20 months, I found almost identical examples of everything found in the above paragraph in reviewing San Marcos City Council prayers. The Galloway court went on to conclude its opinion with this relevant paragraph:

What we do hold is that a legislative prayer practice that, however well-intentioned, conveys to a reasonable objective observer under the totality of the circumstances an official affiliation with a particular religion violates the clear command of the Establishment Clause. Where the overwhelming predominance of prayers offered are associated, often in an explicitly sectarian way, with a particular creed, and where the town takes no steps to avoid the identification, but rather conveys the impression that town officials themselves identify with the sectarian prayers and that residents in attendance are expected to participate in them, a reasonable objective observer would perceive such an affiliation.

City Council prayers are politically difficult to change because of the very vocal and activist evangelical church members in our communities who like having the government promote their religion. In addition, most people resist understanding the constitutional issues involved because their religious views and attachments often lead to strong emotions and claims that not having government-sponsored sectarian prayer violates their religious rights.

But this view is false. Americans do not have a right to have the government sponsor and promote their religions.

While I respect everyone’s right to follow whatever religion they choose, I do not respect their right to force their religious beliefs on me at the instigation of the local government.

In effect, the City Council members imply that if they are not allowed to pray mostly Christian prayers at the beginning of each meeting, their own religious liberty will be harmed or will be at risk. Of course, such reasoning makes no sense. A person’s religious liberty is not at risk because that person can’t force others to participate in his or her religion.

City Council members have presumed that they have the right to compel their favored religious practices on others through the use of public funds, staff, buildings, and resources, but they should know better.

They fail to appreciate that no religious group should be given status as the official faith of the city, even for one meeting. The local government cannot elevate any religion to such a status without violating the Constitution.

Fortunately, there are some simple solutions to this constitutional problem. Invocations do not have to be prayers and they do not have to be given by religious leaders. Anyone can address the city council with words about its responsibilities devoid of any reference to divine guidance.

What every city council should do is keep the best interests of its citizens in mind, seek honest information in pursuit of that goal, avoid conflicts of interest, and make decisions on the basis of reason and evidence, rather than engage in subterfuge and false justifications.

Each City Council member took an oath to uphold the Constitution. By their continued actions in using the city government to promote and sponsor sectarian prayer, each member of the council violates that supposedly sacred oath.