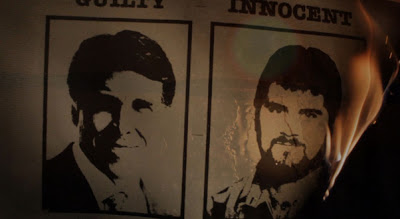 Incendiary: The Willingham Case, a documentary film. It is both riveting and sickening to watch how, in Texas, we execute people on false evidence.

The new documentary Incendiary: The Willingham Case works at two levels. It focuses on what happens when supposedly expert witnesses in a criminal case get the forensic science wrong, and what happens when politicians pretend that the criminal justice system works well. If you are interested in either topic, it is a worthwhile film to see. It is both riveting and sickening at the same time to watch how, in Texas, we execute people on false evidence.

Those who follow the news will recognize the name of Cameron Todd Willingham. He was accused in 1991 of killing his three young children in a fire he deliberately set at their home in Corsicana, Texas. Willingham was convicted and executed for the deaths in 2004. While no one knows how the fire that killed the three young Willingham children started, what seems certain is that Cameron Todd Willingham was convicted and executed based on evidence that does not meet the standard of reliable science. To state this another way: There was and is no reliable scientific evidence to show that Willingham started the fire that killed his three children.

Once the fire investigators began focusing on Willingham as an arsonist, they ceased looking for other explanations for the fire’s origin. While we don’t know how it started, some evidence suggests that it could have started from poor electrical wiring or from a gas heater. These causes were not properly investigated and we will never know the fire’s origin because the investigators allowed the evidence to be compromised or destroyed. No court ever considered the sufficiency of the arson evidence. They focused on whether the trial judge made a mistake in his trial rulings, not the quality of the evidence offered against Willingham.

Missing from the film are interviews with the original fire investigators, the DA, and the defense expert, and an interview with Governor Rick Perry made just for the film. But there are comments from Perry that reveal the closest thing to callous indifference that can be imagined as he was questioned about the case at occasional press conferences and during interviews on a range of topics.

Not once has Rick Perry ever shown any interest in looking at the forensic evidence that was used to convict Willingham, comparing it with the conclusions of fire investigators with unquestioned scientific credentials, and drawing from that comparison a reasoned conclusion about whether the testimony used to convict Willingham was worthy of belief. Had he done so, Perry would have realized that the death penalty system in Texas has serious, fatal flaws.

While my disdain for Rick Perry knows few bounds, I reserve my harshest criticism for the criminal defense attorney who represented Cameron Todd Willingham at his trial — Robert Dunn. Criminal defense lawyers owe their clients, at a minimum, what one of my law school professors called “warm zeal.” Renowned defense attorney Clarence Darrow, as described by writer Joelle Farrell, “defended both the righteous and the despised with the same vigor.” Willingham’s defense attorney lacked both warm zeal and vigor. To this day, he harbors nothing but contempt and loathing, if not hatred, for his now dead client.

I reserve special contempt for Dunn because I have been in his position representing a despised defendant charged with capital murder in a small East Texas town. I doubt that my skills as a trial lawyer were any better than Dunn’s, but what I lacked in experience I tried to make up for with hard work, research, and investigation. There is little evidence that Dunn tried to represent Willingham diligently.

Dunn failed to get the best expert witness available to help him analyze the fire investigation conclusions that were key to Willingham’s conviction. My impression is that Dunn was a hack attorney, cozy with the judges in Corsicana, and unwilling to make waves to provide the best representation possible.

At the time of Dunn’s representation of Willingham there were valuable resources available to him from a Texas death penalty project. I had those resources 12 years earlier. They were enormously helpful in the legal work I did on behalf of my client. They would have saved Willingham’s life had his attorney used them.

The key to Willingham’s case is the inadequate and fictitious fire investigation done by two investigators who had learned on the job. What they learned was not science but folk lore. Their testimony bore all the hallmarks of witchcraft, a point suggested by the comments of renowned fire expert Gerald Hurst, a former chief scientist for explosives companies with a doctorate in chemistry from Cambridge University, who has studied fire science for 40 years.

Hurst filed a report of his findings just before Willingham was executed. Rick Perry received a copy of the report, but there is no evidence that anyone on Rick Perry’s staff bothered to read it. The governor could not be bothered to even glance at it.

More than a half dozen nationally acknowledged experts in fire investigation have confirmed Hurst’s findings in the Willingham case, but Rick Perry was unwilling to delay the execution by 30 days so that the matter could be thoroughly vetted. Perry preferred to dismiss such findings as interference in the Texas capital punishment system by “latter-day supposed experts.” Science doesn’t matter to Perry. He cares about the political implications of what he does.

The two fire investigators in Willingham’s case cited 20 indications that the fire was arson, yet not one of those indications stood up to the fire science known at the time they did their investigation. The investigators were not scientists, but amateur sleuths who saw their work as more art than science. They reached conclusions based on hunches, guesswork, and speculation, which they characterized as faultless conclusions drawn from years of experience.

While the investigation of the Willingham fire was irredeemably flawed, Perry himself, as governor, is one of the greatest flaws in the Texas death penalty scheme. He exercises no independent thought about death penalty matters that come before him, nor does he seem to want to do so. In reviewing the extensive files of the Innocence Project about the Willingham case — perhaps the most complete publicly accessible record of any capital murder case — there is no evidence that either Perry or his staff even looked at the report of Hurst.

Perry referred to Willingham as a monster more than once — a statement intended to close off rational consideration of the facts in the case. After Willingham’s execution, Perry continued to thwart attempts by the Texas Forensic Science Commission to determine the validity of the fire evidence. This is not a man that reasonable people would want to have caring for their dog while they are on vacation. He has not demonstrated the capacity to make rational, intelligent, and wise decisions about mundane matters, let alone matters of life and death.

Incendiary: The Willingham Case documents the deadly folly of the Texas death penalty scheme. It is a system in which no one likes to admit mistakes. This is especially true of politicians — governors, district attorneys, judges, investigators. For those who accept science, the Willingham case is conclusive proof that Texas has executed a legally innocent man. But for Perry, for the district attorney, and even for Willingham’s defense attorney, the execution of Cameron Todd Willingham was the politically expedient thing to do