LAMAR W. HANKINS : SUPREME COURT | Of rights and liberties in the U.S.

How Alito gets the facts wrong about abortion history. 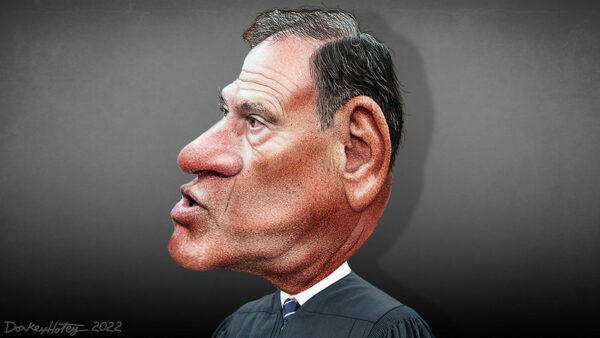 The Ninth Amendment to the U.S. Constitution, part of the original Bill of Rights, reads:

The enumeration in the Constitution, of certain rights, shall not be construed to deny or disparage others retained by the people.

As the Supreme Court continues to wrestle with the question “Does the Constitution protect abortion rights?” we should look carefully at how the Court approaches deciding what rights and liberties exist or should exist under the Constitution, especially with regard to the unenumerated rights provided by the Ninth Amendment.

In an attempt to graft originalist theory onto every issue that comes before the Court, especially the abortion question, Justice Alito’s draft opinion for a majority of the Supreme Court overturning Roe v. Wade makes two historical mistakes: First, it chooses to look only at a narrow band of “history and tradition” as developed in the laws of the various states, rather than a history of human beings through the ages, which reflects much broader concerns and practices; second, it distorts and falsifies the history of this country pertaining to abortion to suit the majority’s preferred political and religious views.

The Constitution as originally adopted doesn’t mention abortion, segregation, slavery, marriage, health care decisions, contraception, confidentiality, marital privacy, privacy (in general), travel, children, child-raising, schooling, psychological testing, political participation (especially through parties), labor unions, treatment for mental illness, and many matters of conscience, yet rights around these concepts have been recognized by the courts in spite of a long history of their denial by those same courts.

The right to conscientious objection to war, absent religious foundation, was recognized for the first time in the Seeger decision in 1965. The right to a court-appointed attorney in criminal cases was not given substance by the Supreme Court until Gideon in 1963 and Argersinger in 1972. The due process rights of juveniles accused of crimes were not recognized until Gault in 1967, Winship in 1970, and Breed in 1975. In 1970, 18-year olds were permitted the right to vote in federal elections by an act of Congress, which did not run afoul of the long history of allowing only 21-year olds to vote. All of these cases demonstrate that longstanding discrimination against certain liberties does not preclude recognizing those liberties at some later time.

Alito’s draft opinion overturning Roe v. Wade approaches rights and liberties not specifically mentioned in the Constitution by deciding if a particular right is deeply rooted in American history and tradition. This approach, however, is not required by the Constitution; it is made up by the justices who sit on the court to serve their needs, not the liberty interests of Americans. And it ignores much vital American history and tradition to reach its conclusion and fails completely to consider the context of the rights and liberties claimed. In addition, it gets much of the anti-abortion law history wrong, as noted by Aaron Tang, a law professor at UC Davis :

“The best evidence is that only 16 of 37 states banned pre-quickening abortions when the 14th Amendment was ratified. In the other 21 states, abortion remained perfectly lawful through roughly 16 weeks of pregnancy. As one pastor explained in response to a married woman who consulted him about a pre-quickening abortion, such an act was “no crime, because the child was not alive.” [Quickening is when a pregnant person starts to feel their baby’s movement in their uterus (womb). It feels like flutters, bubbles or tiny pulses. Quickening happens around 16 to 20 weeks in pregnancy, but some people may feel it sooner or later.–Cleveland Clinic]

Alito’s history rendering, while being demonstrably wrong with respect to abortion, does not take into account that for much of our history blacks, women, gays, juveniles, and criminal defendants have been systematically deprived of participation in civil and political life through discrimination and often by denial of the right to vote. If we recognize only those liberties and rights that white (mostly heterosexual) males afforded those left out of political power for most of our history, the Ninth Amendment will be left with little, if any, meaning, which was not the intention of the drafters when the Bill of Rights (including the Ninth Amendment) was adopted.

The Federalists saw no need for a Bill of Rights
to be included in the Constitution.

The Federalists saw no need for a Bill of Rights to be included in the Constitution, arguing that because all such rights could not be listed, including some would allow an unrestrained government to deny ones not listed. But James Madison responded that “It has been objected also against a bill of rights, that, by enumerating particular exceptions to the grant of power, it would disparage those rights which were not placed in that enumeration; and it might follow by implication, that those rights which were not singled out, were intended to be assigned into the hands of the General Government, and were consequently insecure.”

To prevent such an interpretation, Madison proposed what became the Ninth Amendment, intended to guarantee that other rights, unenumerated, should be recognized.

The Supreme Court case that most discusses the importance of the Ninth Amendment is Griswold (upholding a right to contraception). Both Justice Douglas, writing for the Court, and a concurring opinion by Justice Goldberg, explain their views. Justice Goldberg wrote,

Both Douglas and Goldberg read the Ninth Amendment as indicating that the courts could set aside legislative and executive efforts to abridge other fundamental rights, especially rights that are derivative of several expressed rights, such as found in the First, Fourth, Fifth, Tenth, and Fourteenth Amendments.

I can think of no more private decision than that of a woman to decide what health care she will receive.

I can think of no more private decision than that of a woman to decide what health care she will receive and what will be done or not done to her body. This right to privacy and autonomy is central to recognizing the right to abort an embryo, which does not generally achieve the status of fetus until the eleventh week of gestation. The thirteenth week is the end of the first trimester, a time before which the right to terminate the pregnancy was recognized by the Supreme Court in Roe as when a woman has complete discretion in determining her health care, including whether to end the pregnancy. I will leave a discussion about such health care decisions after the first trimester for another time.

The history of terminating pregnancies is ancient and usually was done in private, perhaps with advice or private assistance from herbalists and other predecessors to what we now call medical professionals. Both botanical and mechanical methods were used in Greek and Roman times. It is an insufficient consideration of history to ignore the private nature of such decisions over thousands of years and impose religious proscriptions on such private matters, as Alito’s draft opinion does; and it is poor scholarship, at best, and mendacity, misogyny, and contempt for women, at worst, to intentionally misrepresent that history.

U.S. history and tradition did not begin in 1788 with the adoption of the Constitution, nor in 1791, with the ratification of the Bill of Rights, nor in 1868 with the ratification of the 14th Amendment. But U.S. history and tradition, broadly and accurately understood as a part of the world’s history, suggests that rights of privacy and autonomy should extend to a woman’s most private decisions about her health care. Madison put no historical constraints on our rights; neither should the Supreme Court.