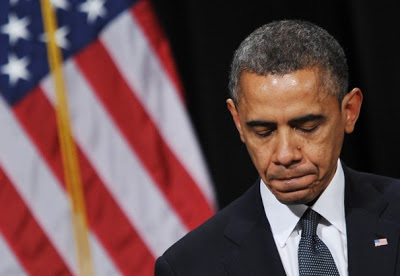 On Sunday night, December 16, President Obama spoke at a vigil for those who died at Sandy Hook elementary school in Newtown, Conn. Image from The Washington Post.
The failure of religion-based public grief

My dissonance came from the very words Obama spoke and quoted because for me they are empty and inconsequential in the face of such tragedy.

When President Obama spoke at the memorial service for the children, teachers, and administrators murdered in Newtown, Connecticut, I was overwhelmed by dissonance. His remarks assumed that a Christian perspective was applicable to everyone who mourned as he spoke about “eternal glory” and quoted bible verses: “For we know that if the earthly tent we live in is destroyed, we have a building from God, an eternal house in heaven not built by human hands.”

I empathize with Obama’s reliance on scripture and belief in a supernatural world with a heaven above and prayers heard by a god who presumably cares. With such tragedy, it is difficult to know what to say without relying on that which is familiar and may comfort the speaker and at least some of the listeners.

What to say confounds Christians and non-Christians alike. But my dissonance came from the very words Obama spoke and quoted because for me they are empty and inconsequential in the face of such tragedy.

If there were a god who cared, who answered prayers, the deaths of these 26 people and the killer’s mother would not have happened. We might disagree about the lives of the adults who were killed, but it is hard to ignore the essential innocence of the 20 children whose lives were snuffed out.

Unless a person believes in the Old Testament practice of child sacrifice, there can be no justification for a culture that makes it easy to end so many young lives so quickly.

I have no reason to doubt, as Obama said, that Newtown is a community “full of good and decent people.” And the survivors of December 16 were not alone in their grief, though it is hard to imagine that any of us felt grief in the same way those families did.

In spite of Obama’s best intentions, there is no way that any of us can fully comprehend the burdens felt and experienced by the families of those dead children and their public school caretakers. And Obama was right to point out the selflessness of those caretakers.

Obama’s acknowledgement of the importance of our care and support for one another was a fitting reminder that we are all in this together:

As a community, you’ve inspired us, Newtown. In the face of indescribable violence, in the face of unconscionable evil, you’ve looked out for each other. You’ve cared for one another. And you’ve loved one another. This is how Newtown will be remembered, and with time and God’s grace, that love will see you through.

But Obama’s reliance on his personal theology added nothing but dissonance to his valuable reminder of our togetherness and the need to find solutions to gun violence as communities and as a nation:

…[W]e come to realize that we bear responsibility for every child, because we’re counting on everybody else to help look after ours, that we’re all parents, that they are all our children… Can we honestly say that we’re doing enough to keep our children, all of them, safe from harm?… I’ve been reflecting on this the last few days, and if we’re honest with ourselves, the answer’s no. We’re not doing enough. And we will have to change.

Obama then recounted the four mass shootings that have occurred since he became president, as well as other recent mass killings and deadly shooting incidents: Tucson, Aurora, Oak Creek, Newtown, Columbine, Blacksburg. He continued:

We can’t tolerate this anymore. These tragedies must end. And to end them, we must change. We will be told that the causes of such violence are complex, and that is true. No single law, no set of laws can eliminate evil from the world or prevent every senseless act of violence in our society, but that can’t be an excuse for inaction. Surely we can do better than this… We can’t accept events like this as routine.

This appeal to political action to stop such senseless violence should have resonated with everyone. Especially so now that we know, thanks to Slate.com, that 18 people are killed each day in the U.S. by gun violence. Stated another way, every 36 hours, we experience the number of gun deaths that occurred in Newtown on December 16.

After making his appeal to find answers to the useless violence caused by people with powerful killing machines, and discussing the human condition briefly, Obama returned to his Christian message, quoting scripture which suggests that the deaths of these 27 people were a part of his God’s “heavenly plan,” as well as the plan of Jesus, which we will not be able to understand.

Even as Obama said that “God has called them all home,” he failed to explain why they had to suffer murder by Bushwacker in the process.

But Obama failed to note the contradiction in his call for political action for gun control. If the deaths of these 27 people in Connecticut were God’s plan, who are we to interfere in that plan? How can we interfere with an act of the Almighty? And making his “God’s will” argument is a strange comfort to those who lost their young children to the actions of a mentally unstable individual who had access to an assault rifle. It is a cold and callous god who would will the deaths of 20 young children, as well as the adults who tried to protect them.

And, of course, Obama felt the need to end his eulogy by once again invoking his religious views: “May God bless and keep those we’ve lost in His heavenly place. May He grace those we still have with His holy comfort, and may He bless and watch over this community and the United States of America.” By implication, God has not kept up His responsibility to watch over us all.

Newtown includes not just Christians of many stripes (mainly Catholic, but also Mormons, mainline Protestant Christians, Pentecostals, and others), along with Jews, Muslims, followers of Eastern religions, nonbelievers, and the religiously unaffiliated. Faced with speaking to such a diverse group, it is not appropriate to assume that they will all find comfort and blessings in any particular version of Christian theology and belief.

But those from the political class regularly mouth the platitudes and beliefs of Christianity because it is the dominant religion in the U.S. References to Christian doctrine are the politically safe route to curry favor with that majority, many of whom also believe in astrology, reincarnation, ghosts, witches, and other superstitions not consonant with Christian doctrine.

Even as a Christian, I did not believe in heaven, hell, miracles, the virgin birth, transubstantiation, and other mythologies that are clearly impossible or beyond reason.

As a humanist, I derive no comfort, holy or otherwise, in being told that the killing of these 27 people was all a part of God’s plan, that all the innocent children are with Jesus in Heaven, and that God has called them home. Their actual homes are bereft of their presence, missing their laughter, joy, and sorrow, and filled with people whose grief seems almost unbearable.

No Bible verses or supernatural ideas or superstitions can change that for most people. For those who are comforted by such beliefs, Obama’s words may have been appropriate, but for the rest, they likely seemed insensitive, unreasoning, and obsequious.

Obama’s task was daunting. Much of it he did well, but pushing his theology on others was unnecessary, unhelpful, and potentially offensive to those from other lifestances, as well as many Christians who don’t hold to such doctrine.

Christians in public life need to end their self-centeredness and realize that they represent only about one-third of the world’s people, though they are a majority in the U.S. And none of them know, any more than I do, what happens after we die. About death, as we have been reminded by the great 19th century orator Robert Ingersoll, ignorance is equal among all people.

No matter who is in the majority when it comes to religion or non-religion, we should all learn how to speak a common language of comfort, care, compassion, and grief without resorting to the shibboleths of personal religious belief.