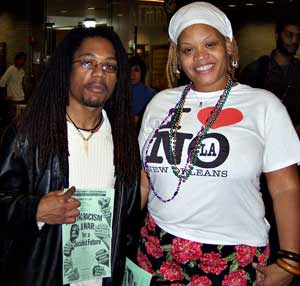 Larry Hales and Friend
ALERT: The Racist Frame-up Charges Against Larry Hales HAVE BEEN DROPPED!

On Wed., April 23 all charges were dropped against Denver activist Larry Hales. Hales had been assaulted by ten Denver cops this past Nov. 30. The cops had busted into Larry’s home without permission at 10:30 p.m., handcuffed his partner to a chair, ripped out some of Hales’ hair, ripped his clothes, and charged him with interfering with the police.

Hales, a leading activist against police brutality and war, is also organizing for protests at the Democratic National Convention in Denver this August, and is well known to the Denver police. Hales had been providing housing for a parolee who had been a police brutality victim. A parole visit had been the pretext of the cops’ raid on Hales’ home, but the parolee was not at home at the time and the cops did not have permission to enter or search the home when the parolee was not present.

A widespread support campaign grew up around the case, demanding that all charges be dropped against Hales. The National Justice for Larry Hales campaign launched an online petition which generated over 160,000 email messages to the members of the Denver legislature, the mayor, city attorney and the judge in the case, the Colorado congressional delegation, congressional leaders, President Bush, Attorney General Mukasey, and members of the media. Letters were faxed from public officials such as Boston City Councilor Chuck Turner, from unions like USW 8751 Boston School Bus Union and many rank and file union leaders, religious leaders like Bishop Filipe Teixeira OFSJC, lawyers and other public figures.

Larry Hales’ message to supporters: ‘Mass campaign made the difference’

Larry Hales wrote the following statement on this victory: The city attorney’s office decided to drop the charges against me because of the attack and the violation of mine and Melissa Kleinman’s fourth amendment rights. But, if there was no campaign and the case not made public, I believe they would have gone forward, wasting time, resources and possibly sending me to jail for an extended period of time, up to a year.

I do not believe in luck or chance, but Melissa and myself did escape great bodily injury or death, and so our case was never as bad as many others. What happened to us is more indicative of what many people who try and house parolees and the parolees themselves face. Their homes are ransacked and the parolees are goaded into a response and if they respond are violated and sent back to prison.

However, in our case there were a great many cops and parole officers and to some it may seem surreal, but what happened on Nov. 30th, is just more of the same, of the state using its forces to harass and intimidate. They were held off and defeated by a mass campaign of support and this is what made the difference.

Melissa and I would like to thank the International Action Center, Troops Out Now, the Recreate ‘68 Alliance, USW 8751, Bishop Teixeira, City Council Person Chuck Turner, the Partisan Defense Committee, the Pan-African Newswire and all organizations and individuals that came to our assistance.

In struggle and solidarity,
Larry Hales

This entry was posted in RagBlog and tagged African-American, Civil Liberties, Justice. Bookmark the permalink.