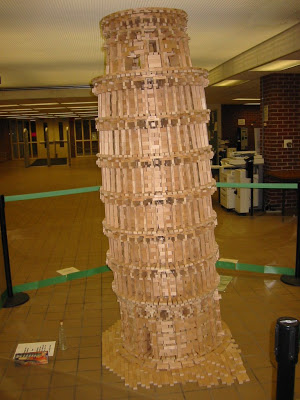 Jingo Bush Pulls Out the Last Piece and the Tower Comes Tumbling Down
By Larry Piltz / The Rag Blog / September 30, 2008

2nd Jenga piece: A Divided Homeland – Bush, wielding egregious lies, convoluted logic, a sadistic cynicism, and blatant fearmongering, divided and conquered the American people and hyperpartisanized the politics of the country, when its unity and solidarity would actually have been the very best weapon against terrorism, a foolish and sinister Bush intention and legacy that may never end.

3rd Jenga piece: The Unnecessary Iraq Tragedy – Bush wasn’t emotionally developed or smart enough to resist his Mad Adventure in Iraq, the beginning in earnest of the withering of the United States, militarily and financially. Bye bye, hyperpower status. Bye bye, unipolar world. Move over and make room, England, France, Holland, and Spain. Hey, China, save a seat for us on the moon, and can we hitch a ride?

4th Jenga piece: Afghanistan II – Bush largely abandoned Afghanistan, intentionally ignored it, starved it of attention and aid, and was quite smugly satisfied with the successful narco-state there that he and his local allied warlords crafted, thereby enabling the inevitable rise of the expanded Neo-Taliban, seemingly as if an endless terror war was what Bush had in mind all along. Nah, couldn’t be, could it?

5th Jenga piece: The Destabilization of Nuclear Pakistan – Bush sided with the dictator despite the Pakistani general’s permissiveness with al Qaeda’s top leadership, undermining Pakistani democracy, and, now that the dictator’s out, is undermining the new democratically elected president with cross-border attacks. Does Bush want an excuse to commandeer Pakistan’s nukes? Well, he’s creating one.

6th Jenga piece: Bush’s Nuclear Cold War with Putin’s Russian Soul – Bush has expedited the arming and training of the militaries of the new proxy “democracies” on Russia’s borders and has corrupted their politicians with the temptation of NATO membership, and Bush “looked the other way” as Georgia invaded and devastated Russian border ally Lower Ossetia. Remember how great the first Cold War was? Don’t worry. It’s never too late for nuclear winter!

7th Jenga piece: The Very Bad Awful Horrible Wall Street Scam & Sting – Wall Street’s big-time Ponzi-pyramid scheme will impoverish the federal government for at least two decades to come, but it’s all in a presidency’s work for the lazy-faire Bush, who brought us the first six Jenga pieces. This Nightmare on Main Street is the Mother of All Fleeces and could have been avoided had Bush’s intention had not been to help drown the federal government in the proverbial bathtub. We don’t need no stinking oversight!?

8th Jenga piece: Believe It Or Not It’s The Iran War Oh My God – Here we go, batten your hatches, because now Bush is going to attack Iran. The new ballistic missile-tracking radar is in place in Israel just in time for October, the expanded carrier/amphibious fleet is in place in and around the Persian Gulf, Subservient Saint Genius Petraeus is newly in charge of the entire Theater of War, and McCain’s campaign has screwed things up so badly that an October Surprise has become not an option but a requirement to keep intact the whole giant con game against America by the mostly Republican branch of the oligarchy. Watch for a CIA false-flag operation in the Gulf. Watch your back. It could be after the election, though.

With Bush’s pulling of the 8th Jenga piece, when Iran implements its justified counter-operations, the whole fantastic tower would come down. The economy would crash, and martial law will burn the elections. It would be bye bye, democracy, and hello, end of the Republic as we think we’ve known it. My only consolation, though mixed for his sake, is that Gore Vidal may still be around to see his prediction literally come true. But I’d bet even he didn’t see it happening all under one president. J-J-J-Jenga!