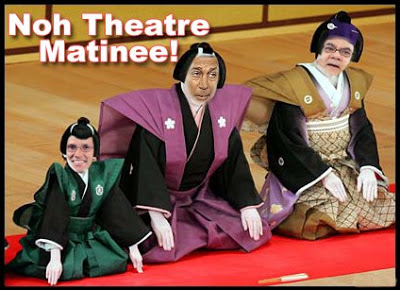 Though none of our elected officials actually got made up in classical white face, their outraged and out sized exaggerations, both facial and verbal would have qualified them for a Kabuki casting call in Tokyo.

Iowa Republican Senator Charles Grassley’s call for AIG bonus recipients to, ” . . .follow the Japanese example and come before the American people and take that deep bow and say I’m sorry, and then either do one of two things — resign, or go commit suicide” was so over the top and insane that it reminded me of a Japanese Kabuki Theater plot.

Kabuki is classical ancient Japanese folk theater performed broadly and loudly for the general public. I became familiar with it when I lived in Tokyo years ago. Kabuki on the Potomac this week fit Kabuki’s theatrical definition with lawmakers wailing loudly, uttering angry threats, and rhythmically pounding podiums in a performance of mangled metaphors and fantasy.

Though none of our elected officials actually got made up in classical white face, their outraged and out sized exaggerations, both facial and verbal would have qualified them for a Kabuki casting call in Tokyo. But they were playing to Americans . . . American voters. Let’s review this week’s performances.

A Treasury Department decision to not risk lawsuits and to allow payment of last year’s Bush-approved retention contract bonuses by failing insurance giant AIG, set off a firestorm of anger and self-righteous rhetoric. The specter of AIG employees receiving bonuses while AIG is propped up by billions in taxpayer money opened the floodgates of rhetorical rage.

It also inadvertently created a bizarre moment of bipartisan participation on both sides of the aisle as the House reacted to steamed emails from their districts. It was time to affix blame. Names and faces were needed as a focus for threats and epithets

The populist Kabuki’s first act centered upon Edward Liddy, who has been untangling AIG’s myriad problems as a government appointed CEO of AIG. Liddy, former CEO of Allstate Insurance, who is working for a dollar a year, became a carnival punching bag as he testified before the House Capital Markets, Insurance and Government Sponsored Enterprises subcommittee last Wednesday.

Liddy quickly defused rumors and misinformation about the “bonuses” making it clear that after earlier executive housecleaning of AIG’s top management, no performance bonuses were being paid at all to anyone. But, clearly going over the heads of many sub-intelligent members of the subcommittee, was his explanation of “retention bonuses” and how they worked.

The retention bonuses were contractual arrangements made with market specialists to defuse toxic financial bombs in AIG’s failed ‘Financial Products’ division. “Wind down,” it the term used. But while being neutralized to get them off AIG books, the potentially explosive complex credit default swap securities were still being actively traded. De-fusing the complicated potential bombs requires experts intimately familiar with how they worked. Mishandled or ignored, the securities could blow up and cause further potentially ruinous damage to AIG if not carefully and slowly sold off and neutralized. Picture McGuyver locating the red wire on the bomb’s timer.

Firing the AIG FP division specialists and not paying them for the work they were legally contracted to do could invite disaster for AIG. Folks seemed to think managers were being paid huge bonuses to keep them as employees. In fact, it seems the promise of a bonus after they completed specific difficult contracted tasks was what “retained” them to complete the complex and difficult work . . . then they were free to go.

Highway contractors routinely contract to get a new bridge built as quickly as possible, and they accept promises of so many millions as a bonus if it is finished on time and even more if it is finished ahead of time. After the evil lords of AIG’s Financial Products Division were fired and sent packing with no bonuses, AIG’s remaining Financial Products specialists stayed on, working long hours to get the toxic trades off the books, and had money coming when they got the bad stuff off the books for good. That was the deal. This is essential for AIG to quickly return profitability and pay back the federal money propping it up. But no one wanted to hear all this. Folks back home wanted a pound of flesh, not clear reason. It was time to be mad and indignant!

The red faced representatives heard only the word BONUS in Liddy’s explanation. And each used up his or her five minutes for the folks back home who were watching on TV to let the rude, accusing rhetoric fly at Mr. Liddy.

Subcommittee member, Judy Biggert, R-IL, was typical of the befuddled, yet angry, representatives to have a go at Mr. Liddy. Biggert, represents Illinois 13th district, and since her election in 1999, she has sponsored 92 bills of which 81 haven’t made it out of committee and two were successfully enacted. She looked disheveled and confused, and after Mr. Liddy’s complete explanation of the bonus situation he inherited, she, nonetheless, read from her rambling prepared remarks anyway. The general, simplistic image of bonuses and rich executives slurping umbrella drinks on their private jets was just too big a target.

“Give me three good reasons why the taxpayers should be paying, umm, . . . all those bonuses, with, you know, that taxpayer money . . . .?” Had she been listening, and not simply waiting to grandstand with her pre-prepared anger, she could have answered all three of her own questions from Mr. Liddy’s explanation. Biggert’s own net worth in 2007 was estimated at just under $7 million from her financial disclosure statements, so she should be able to explain what rich folks do to her unemployed constituents back home.

Democratic Congressman, Barney Frank, came on stage as an early plot changer, and in sputtering rage demanded the names of all those getting bonuses. A Kabuki Western where the sheriff sends out a posse for a possible mass trial of those pre-judged as guilty. And if Black Hat Liddy didn’t cough them up, Frantic Frank would issue subpoenas! Never mind New York Attorney General, Andrew Cuomo had already made such a request.

Mr. Liddy exhibited impressive control and just let the madness about him rage while responding quickly and politely in the face of rude and shameless behaviour by his inquisitors. When Barney ended his threats and demand for names and addresses, Liddy read him a typical email from those being whipped up by misinformation and fear over the failing economy. The threatening email called for AIG employees to be garroted by piano wire. Liddy suggested that Mr. Frank might want to reconsider his demand simply based upon personal security reasons for his fellow Americans.

Just like in Kabuki theatre, those in the audience came and went. There was an intermission, during which MSNBC afternoon news reader, Nora O’Donnell, perhaps better known for co-hosting the New York City St. Patrick’s Day Parade than her on air news work, warmed up. “Liddy is really getting bombarded,” she snarled, and then shoving aside any journalistic credentials she may possess, she joined in the outrage demanding, “Why?” “When?” “Who?” instead of applying the journalistic challenge of finding answers to those basic questions herself as the reporter she is supposed to be.

As the weekend approaches, all this theater and angst has but one central schwerpunkt. The House frantically cobbled together a bill to “get back our taxpayer money.” They voted 328-93 to impose a 90% tax on any bonuses paid by AIG. This populist mob, responding to impulse and mass hysteria, mostly caused within their own ranks, are supposed to be lawmakers. Legislators.

Over the weekend, hopefully both our esteemed Congressmen and Senators will drop by for a thoughtful look over the Constitution of the United States of America. Wiser heads, going back to the days of English King, James II, have stepped in to restore law and prevent mob rule such as has been proposed in this week’s Kabuki theater at the Nation’s Capitol.

They can even simply drop by WikipediA and type in “Bill of attainder.” Their bill instituting a 90% tax on AIG bonuses should never even be considered in the Senate. You can’t pass a law like they have just passed in the House. And you cannot ratify it in the Senate. The proposed law is against the law. Ex post facto.

Here it is plain and simple:

“A bill of attainder (also known as an act or writ of attainder) is an act of legislature declaring a person or group of persons guilty of some crime and punishing them without benefit of a trial.

Bills of attainder are forbidden by Article I, section 9, clause 3 of the United States Constitution.”

Next act: Less hysterical and more responsible legislators go the the real root of the problem and reinstate governmental financial regulatory oversight removed by Regan, which has allowed AIG, and dozens of other big players to run rampant during the recent Bush administration. Madly chasing horses already out of the barn will do nothing at all to fix the terribly broken world of high finance and banking.