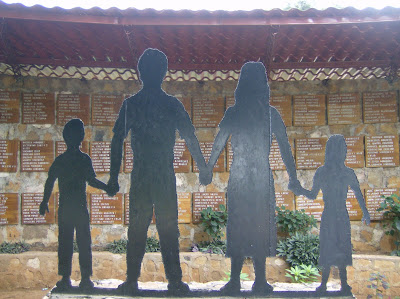 Memorial to the massacre of the people of El Mozote, El Salvador. Image from No Fixed Address.
‘Removing the veil’:
El Salvador apologizes for State violence
on 20th anniversary of Peace Accords

SAN SALVADOR, El Salvador — On Monday morning, January 16, crowds gathered in the small community of El Mozote to commemorate the 20th anniversary of the signing of the Peace Accords that ended El Salvador´s 12-year-long civil war.

El Mozote, in the rural department of Morazán, is the site of a 1981 massacre of more than 1,000 civilians, primarily children, carried out by the Salvadoran Armed Forces. At the solemn event, El Salvador’s first leftist president, Mauricio Funes, named the military officers implicated in the horrific massacre, stating, we must “remove the veil that has blinded us for three decades.”

Funes asked for forgiveness from the victims and the Salvadoran people on behalf of the State and then announced a series of reparations for the victims and their families. In addition to physical and mental health services and an economic development plan for El Mozote, the government has promised to declare the community a protected historic site and has committed to updating public school curricula as well as police and military training materials to acknowledge the history of human rights violations by the armed forces.

Funes is the first president in Salvadoran history who has acknowledged the crimes against humanity committed by the government during the civil war that resulted in 75,000 deaths, in their majority civilians. However, the prosecution of the responsible actors is prohibited by an amnesty law approved in 1994 by the right-wing parties five days after the release of the U.N. Truth Commission report, which attributed 85% of civilian deaths to the armed forces and 5% to the Farabundo Martí National Liberation Front (FMLN).

The Peace Accords, the result of negotiations between the Salvadoran government and the leadership of the FMLN guerrilla army, were signed in 1992 in Mexico City’s Chapultepec Castle. The accords ended the war, allowed the FMLN to become a formal political party, and included a series of agreements to address the social, political, and economic causes of the Civil War.

To commemorate the historic date, the FMLN held a massive Festival for Peace with tens of thousands of supporters in San Salvador. President Funes participated in a summit with ex-guerrilla combatants, where he unveiled a new government program to ensure that veterans of both the FMLN and the armed forces receive the benefits that correspond to them — one of the agreements of the Peace Accords that was largely sidelined by the right-wing administrations that held power from 1994 to 2009.

Funes’s announcement of reparations for the families of victims and ex-combatants is one of several steps being taken by the new government to fulfill outstanding commitments of the Peace Accords. Addressing the crowds at the FMLN’s commemoration march, Vice-President and long-time FMLN leader Salvador Sánchez-Cerén, who is one of the signers of the Peace Accords, explained that the FMLN’s guiding objectives in its first period of government (2009-2014) were “the consolidation of the democratic transition initiated during the Peace Accords and the construction of a new economic and social model.”

Perhaps the most popularly recognized victories of the Peace Accords include the end of over 60 years of military dictatorship and the opportunity to create a viable democracy.

“The Peace Accords created a new political process, one in which all would have a chance to participate,” said FMLN member Jose Nuñez during a community celebration in Washington, DC. The presidential victory of the FMLN in 2009, and the fact that the FMLN currently holds the largest number of seats in the Legislative Assembly, is a testament to the effective implementation of this pillar of the Peace Accords.

Many major agreements were successfully implemented in the days, months, and years following January 16, 1992. The sprawling Salvadoran armed forces were dramatically reduced and several of its most repressive wings, including the National Guard and the Treasury Police, were disbanded completely. The role of the armed forces was strictly limited to the defense of national territory and sovereignty.

According to the Accords, the “broader concept” of security, including “economic, political and social aspects which go beyond the constitutional sphere of competence of the armed forces,” became the “responsibility of other sectors of society and of the State.” To this end, the Peace Accords created a new institution, the National Civilian Police (PNC), to be composed of former soldiers, demobilized FMLN combatants, and civilians.

However, in the past five years, the strict lines between the armed forces and public security have started to blur. Former president Antonio Saca (2004–09) was the first president to send soldiers to the streets to assist the PNC, a protocol that Funes has continued. Recent changes in Funes’s security cabinet threaten to undermine the ideological separation between the military and the police, as does the influence of increasing U.S. security aid to Central America. 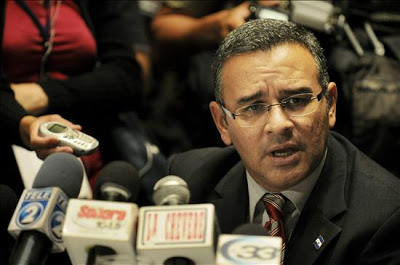 Mauricio Fumes, President of El Salvador. Image from Todanoticia.com.
In November, David Mungía Payés, a recently retired military general who had previously served as Funes’s Minister of Defense, replaced Manuel Melgar, a former FMLN commander, as Minister of Public Security. This is the first time that a military officer will hold this position. Funes’s defense of his decision underscored the very concerns raised by the FMLN and many in the population.

“The designation of David Munguía Payés doesn’t constitute any violation of the spirit of the Peace Accords, nor a step backwards in the consolidation of the democratic process, much less a violation of constitutional order,” he said.

At the end of December, Eduardo Linares was removed from his position as head of the State Intelligence Agency, thus effectively removing the FMLN leadership from the security cabinet in less than two months. Many have speculated that the cabinet shakeup was influenced by the United States in light of two new agreements: the Partnership for Growth and the Central America Regional Security Initiative, an expansion of the Mérida Initiative to which the United States has designated $260 million.

High-ranking members of the Ministry of Public Security told the online newspaper El Faro that Melgar’s removal was a U.S. condition for implementing the Partnership for Growth, a series of economic and security agreements, which was signed by both countries just four days prior to his resignation. The FMLN has expressed concern that the partnership may “be inclined toward increased military participation.”

Military influence seems to be re-emerging in those Central American countries where the United States has concentrated its security aid under the banner of the “War on Drugs,” namely El Salvador, Guatemala, and Honduras.

In December, Honduran president Porfirio Lobo presented a constitutional amendment to the Honduran Congress to grant police power to the armed forces at the same level of authority and independence as the National Police. On January 14, former general Otto Pérez Molina, who has been accused of genocide due to his participation in “scorched earth” operations in the 1980s, was inaugurated as President in Guatemala, the first military officer to be elected since the end of the civil war.

“It’s no coincidence that Guatemala’s new president is a general accused of genocide, El Salvador’s new minister of security is a former general, and a military officer who masterminded the coup d´état [Romeo Vásquez] is running for president in Honduras,” said Adalberto Elias, FMLN Youth Coordinator for El Salvador’s capital city of San Salvador.

Beyond the challenges of organized crime and impunity, the new government in El Salvador must contend with abiding social and economic inequality, ironically, the very conditions which led to the popular struggle in the 1970s that resulted in the war. The economic agreements of the Peace Accords, by far the most limited, were effectively ignored over the last 20 years. Though Funes and the FMLN have taken several steps to fulfill these long-overdue commitments — for example, legalizing the transfer of over 17,000 land titles to campesinos — only recently has the new government been able to initiate any structural economic change.

In December, the Salvadoran Legislative Assembly approved the FMLN’s proposed tax reform, which will eliminate income taxes on those earning less than $500 per month, increase taxes on high-earning individuals and business, and close loopholes that currently contribute to nearly $600 million per year in corporate tax evasion. The progressive reform is arguably the first action to redistribute wealth since land reform acts were signed during the war.

The upcoming March legislative and municipal elections in March will in part determine the possibility for passing more expansive legislation and, as Vice-President Sánchez-Cerén explained during the commemoration, the country’s ability “to realize the people’s hope to build a better and more dignified life.”

[Austin native Leah Wilson is a journalist and CISPES volunteer based in San Salvador. Her work has previously appeared in Z Magazine, Labor Notes, and The Rag Blog. Alexis Stoumbelis is the Executive Director of CISPES, the Committee in Solidarity with the People of El Salvador. This article was first published at NACLA: Knowledge Beyond Borders. Find more articles by Leah Wilson on The Rag Blog.]