Michael Grabell : How the Stimulus Revived the Electric Car 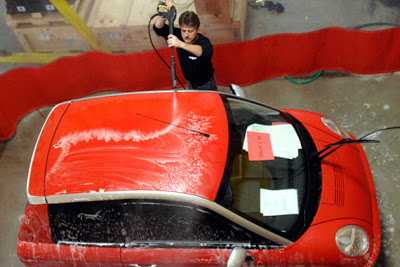 A common criticism of President Obama’s $800 billion stimulus package has been that it failed to produce anything — that while the New Deal built bridges and dams, all the stimulus did was fill some potholes and create temporary jobs.

Don’t tell that to Annette Herrera. She was 50 when the auto supplier she worked for in Westland, Michigan, closed its factory and moved the work to Mexico. Then, after being unemployed for two and a half years, she got a job in October 2010 with A123 Systems, which had received $250 million in stimulus money to help open a new lithium-ion battery plant in nearby Romulus, Michigan.

“The first thing I did was call my husband and tell him, ‘You’re never going to guess! I got a job!'” Herrera recalled. “And then it was like celebration time.”

One success the Obama administration can duly claim is the rebirth of the electric-car industry in the United States. Automakers have unveiled a number of mass-market electric cars, which have seen small but rising sales. Battery and parts manufacturers are building 30 factories, creating thousands of new jobs. A123 has hired 700 workers at Herrera’s plant and a second one in nearby Livonia, and plans to hire a couple thousand more people over the next few years.

If it wasn’t for the stimulus, the companies say, they would have built these plants overseas.

It was all part of an effort to promote “green” manufacturing and put a million electric cars on the road by 2015.

The question is: Will it last?

Elkhart, Indiana, once believed it would. It saw electric vehicles as its salvation after watching its unemployment rate hit 20 percent. Eager to seed a new industry, the county witnessed electric-vehicle ventures sprout out of nowhere as the stimulus took off in 2009.

But by late summer 2011, what had sprouted were weeds. The parking lot of the Think electric-car plant was full of them, some more than a foot high growing from the cracks. Out front were two pickups and a motorcycle.

Hundreds of laid-off factory workers were supposed to have found jobs churning out the Norwegian company’s bug-like, plastic-bodied cars, which ran solely on electricity.

Today the Elkhart factory employs two. Its parent company filed for bankruptcy in June. Its largest shareholder and battery maker, Ener1, which received $118 million in stimulus money, did the same last week.

Electric cars began appearing on California roads in the mid-1990s after state regulators mandated that a certain percentage of automakers’ fleets include zero-emissions vehicles.

But within a few years, they were deemed a failure by car companies, which stopped making them and took back those they had leased.

In the early 2000s, gas hadn’t even passed $2 a gallon. Less than a decade later, it was twice that. Toyota had proven the demand with its long waiting list for the Prius hybrid.

Government policy had changed, too, with a 2007 energy bill that increased fuel-efficiency standards and provided $25 billion in loans for automakers to upgrade their plants.

But until the economic stimulus package was passed in 2009, the manufacture of electric cars and their batteries in the United States was nearly nonexistent.

The United States had only two factories manufacturing less than 2 percent of the world’s advanced batteries. Most were made in Korea and Japan. In America, only Tesla manufactured an electric car — which sold for a cool $100,000. Across the entire country, there were a mere 500 electric charging stations.

But as the stimulus kicked in, there was suddenly no better environment for the electric car to thrive.

With more than $2 billion in federal grants, matched by another $2 billion in private investment, the Obama administration was supporting electric cars from the mine to the garage.

Chemetall Foote Corp., which operates the only U.S. lithium mine, received $28 million to boost production at its plants in Nevada and North Carolina. Honeywell received $27 million to become the first domestic supplier of a conductive salt for lithium batteries. More than $1 billion was spent to open and expand battery factories, many of them in hard-luck towns across Michigan. Through a separate federal program, automakers received loans to retool their assembly lines.

Customers could receive a $7,500 tax credit for buying an electric car. The stimulus provided funding for 20,000 electric charging stations by 2013. In many cities, drivers could get a home charger for free.

In July, Johnson Controls opened the first U.S. factory to produce complete lithium-ion battery cells for electric vehicles. Compact Power is building a $300 million factory in Holland, Michigan, to produce batteries for the Chevy Volt and the electric Ford Focus. A123 now supplies the luxury electric carmaker Fisker Automotive and the manufacturers of electric delivery trucks used by FedEx and Frito-Lay. “Quite simply, if we didn’t get that grant, we wouldn’t have built [the factory] in the U.S.,” A123 spokesman Dan Borgasano said.

The battery grants have created and saved more than 1,800 jobs for assembly workers, toolmakers, and engineers, according to a ProPublica analysis of stimulus project reports filed by the companies. That number doesn’t include the workers who constructed the plants or those hired by the matching private investment the companies had to make to get the grants.

The problem: Consumers have been slow to embrace the electric car.

The price of the battery is still too high, and the price of gas is still too low, the Government Accountability Office warned in June 2009 before the grants were awarded. The starting price for the all-electric Nissan Leaf is $33,000, while the hybrid Volt sells for about $40,000 before tax credits — far more than many middle-class families can afford.

About 40 percent of drivers didn’t have access to an outlet where they park their vehicles, the GAO noted.

“Although a mile driven on electricity is cheaper than one driven on gasoline,” the National Research Council reported, “it will likely take several decades before the upfront costs decline enough to be offset by lifetime fuel savings.”

Perhaps the biggest obstacle, though, was what the automobile represents in the American psyche: the freedom of the open road. While most people drive less than 40 miles per day, consumers want cars that they can also take on summer vacations — and they don’t want to have to constantly worry about looking for a charging station.

The Leaf’s range is just 73 miles, according to the official government rating, well below the much-advertised 100 miles.

A report by congressional researchers last year concluded that the cost of batteries, anxiety over mileage range, and more efficient internal combustion engines could make it difficult to achieve Obama’s goal of a million electric vehicles by 2015. Even many in the industry say the target is unreachable.

While the $2.4 billion in stimulus money has increased battery manufacturing, the congressional report noted that the United States might not be able to keep up in the long run. South Korea and China have announced plans to invest more than five times that amount over the next decade. Even A123 had to lay off 125 workers in November — though Borgasano says the company plans to rehire them all by June — because Fisker reduced orders.

Navistar International had received $39 million in stimulus money to build 400 electric delivery trucks in the first year. But by early 2011, it had hired about 40 employees and assembled only 78 vehicles.

Think had rallied into 2011 with plans to start production in Elkhart earlier than expected. But in April, assembly work suddenly stopped as the plant awaited parts from Europe.

In June, Think’s parent company filed for bankruptcy. The decision left the Elkhart plant slouching toward extinction until the American subsidiary was purchased by a Russian entrepreneur who promised to restart production in early 2012.

But on Thursday, its battery maker, Ener1, also filed for Chapter 11 bankruptcy, reporting that the demand for electric vehicles “did not develop as quickly as anticipated.”

Moore put it this way: “The fact that this hasn’t moved very quickly, that doesn’t bode well for that idea.”

The fate of the electric car depends greatly on whether sales take off soon.

There are other factors, such as the price of gas and whether Congress approves proposed standards requiring automakers to raise the average fuel economy of their vehicles to 55 miles per gallon by 2025.

The electric car has always struggled with a chicken-and-egg dilemma: Automakers have been reluctant to build electric cars without consumer demand. But consumers won’t buy them until automakers develop cheaper, longer-range batteries.

One of the goals of the ongoing stimulus spending is to solve this problem. By 2015, the 30 battery and component factories will be able to produce 40 percent of the world’s batteries, according to the administration.

The investments would help manufacturers increase the batteries’ life from four years to 14 and cut their cost from $33,000 to $10,000, the administration said in a report on innovation. That would make the electric car more competitive.

Herrera noted that many people at the A123 factory believe they will never be able to afford the cars powered by the batteries they make. But, she says, “you never know.”

“When the flat-screen TVs first came out, they were way expensive, and now they’re reasonably priced,” she said. “I think that’s going to be the same thing with electric automobiles. This is a new product. It’s going to take time.”

[Michael Grabell has been a reporter at ProPublica since 2008, producing stories for USA Today, Salon, NPR, MSNBC.com, and the CBS Evening News. Before joining ProPublica, he was a reporter at The Dallas Morning News. He has twice been a finalist for the Livingston Award for Young Journalists. This story was published at and distributed by ProPublica It was adapted from Money Well Spent?: The Truth Behind the Trillion-Dollar Stimulus, the Biggest Economic Recovery Plan in History which will be published Tuesday, February 6, by PublicAffairs.]