From Dancewater. Many thanks to our friend Susan for this revealing post. 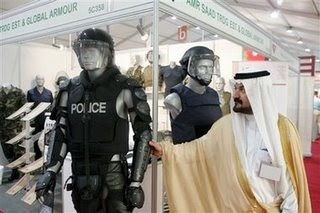 A man inspects the body armor police riot gear displayed on a mannequin, at the ‘Rebuild Iraq 2007,’ the 4th International Trade Exhibition for the Rebuilding of Iraq in Amman, Jordan, Monday, May, 7, 2007. More than 40 countries are taking part in the conference to encourage countries and companies to invest in all aspects of Iraqi life. (AP Photo/Nader Daoud)

Rebuild Iraq? Police in riot gear are supposed to rebuild Iraq? And this is the FOURTH trade fair for ‘rebuilding’ Iraq? Have they lost their minds? If they want to rebuild Iraq, they should start with supplying all the hospitals and clinics with EVERYTHING that they need. They should start by seriously looking for a neutral third party (not the USA!) to broker peace and stability in Iraq. They should make sure everyone has enough food and a decent shelter.

Sometimes I think this whole war business is just a racket to make some sickos out there a LOT OF MONEY. They keep promoting violence and chaos and strife, and hey, guess what, some of the people fall for it. And then some more people are fearful and feel they need to protect themselves – and the weapons manufacturers get to sell even MORE weapons. And people like George Tenet can help get a war on, whine that they were mis-judged, write a damn book about it and MAKE TONS OF MONEY. And he is far from being the only one – Senator Edwards who co-sponsored the bill for the war on Iraq ALSO made money off the war (all legal) and now is going around telling other people what they should be doing – now that the political winds have shifted!

What a bunch of immoral little cowards we have – they feel that more armor and more weapons will protect them – while they cause untold misery for other people and never even NOTICE WHAT THEY DID. And they call themselves men! Ha!