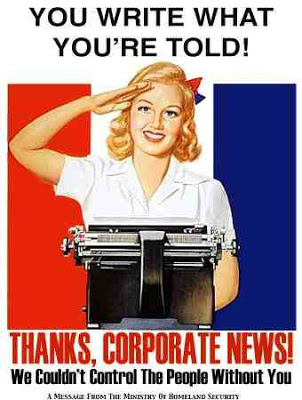 Why Big Media Needs Propaganda to Survive
by Megan Tady / May 9, 2008

The mainstream media are as likely to report on Pentagon propaganda — and thus, themselves — as President Bush is likely to cede that “mission accomplished” was poor phrasing. That is, it ain’t ever gonna happen.

The mainstream media have instituted a news blackout on the New York Times exposé, casting a dark cloak over the story with the wave of a magician’s wand. Perhaps with this media sleight-of-hand, we’ll soon forget that that this story ever existed.

To avoid being duped, we need to understand not just why the mainstream media are mum on this scandal, but how they created the scandal in the first place. Just how does propaganda creep unnoticed into everyday reporting?

If you haven’t heard already, just six corporations control most of what we read, watch and listen to every day. These corporate giants are motivated entirely by profit, not public service. So as Big Media get bigger, gobbling up more newspapers, radio stations and TV networks through consolidation, our media system actually gets smaller. Corporate execs have gutted newsrooms, shuttered foreign bureaus and slashed spending on investigative reporting.

Staff-strapped media outlets rely increasingly on packaged punditry to fill the void left by investigative reporting and informed debate about the nation’s most important issues.

The “C” in consolidation also stands for “cookie-cutter” journalism, with most reporters falling in line to deliver the official view of the news. Getting a diversity of voices in our news is hardly even a putative goal these days. C also stands for “cheap”: Real reporting is expensive compared to staged shouting matches.

Corporate owners have a vested interest in keeping courageous and intelligent reporting a journalism-school dream, especially when it comes to the Iraq war. After all, General Electric doesn’t want its reporters at MSNBC to question the war while it’s busy churning out Apache helicopters. It turns out that everyone — from the military analysts espousing Pentagon rhetoric to the corporate news owners to the government itself — have shared interests in leading the American people to war.

To consolidate their control, Big Media owners like Rupert Murdoch have cozied up to Washington, deploying legions of lobbyists and lawyers to craft U.S. communications policy, while doling out millions of dollars in campaign contributions to squelch any challenge from elected officials.

Hence, propaganda, misinformation and government spin become the daily news norm — so normal, in fact, that many in the news punditocracy are having trouble understanding what all the hoopla over propaganda is about. Isn’t this the way news is “made”?

There are still many hard-working, well-meaning journalists in the mainstream media producing quality journalism. Unfortunately, the corporate leash let’s very few reporters stray so far. It’s becoming increasingly difficult for most to do their jobs.
Weak and lightheaded, the junk news we now call journalism is now entirely incapable of fulfilling its mission to hold government and corporate actors accountable, to report in the public’s interest, and to critique itself for wrongdoing.

There’s already a concerted effort from activists and the blogosphere to urge Congress to investigate the Pentagon’s propaganda scheme, and Congress has responded.

But the problems run much deeper. Right now, there’s a “resolution of disapproval” before Congress that, if passed, would take a first step toward stopping the media consolidation that has lead American journalism down the propaganda path.

The resolution would overturn an earlier decision by the Federal Communications Commission to relax the longstanding limits on how much media one company can own in a single town. These limits preserve diverse and local perspectives in a news world where consolidated media increasingly speaks with one official voice.

Yes, we need to hold the government accountable for the crime of propaganda. But we also need to roll back consolidation so that new voices can counter the propaganda that has seeped into the newsrooms of the mainstream press.

This entry was posted in RagBlog and tagged Censorship, Media. Bookmark the permalink.